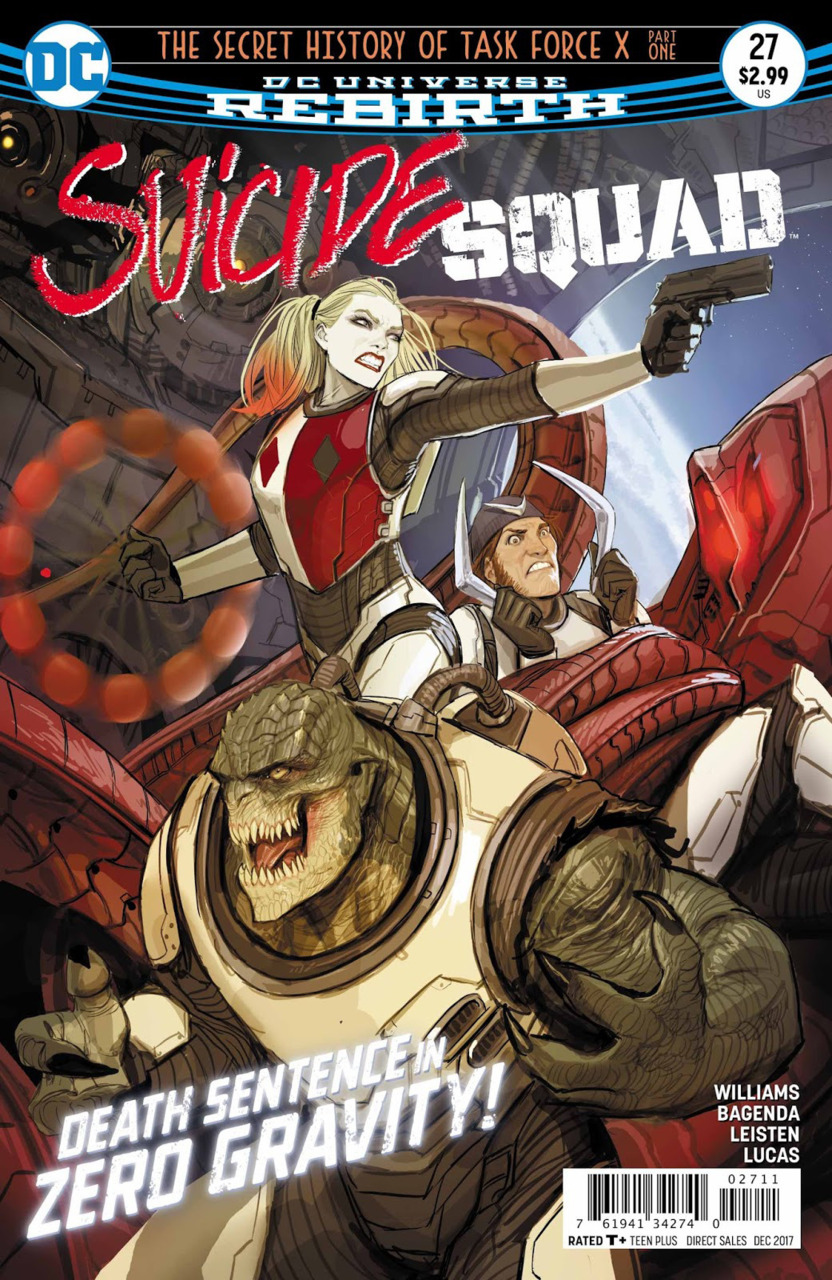 Overview: The Suicide Squad launches in to space to investigate a new threat to Amanda Waller.

Synopsis (spoilers ahead): The issue kicks off with Boomerang eating a bucket of chicken and watching a news report about a large explosion on the moon. Superman is on TV being interviewed and reassures the reporter that the explosion was likely an asteroid strike. Boomerang is interrupted by an announcement calling for lights out for the cells containing the members of the Suicide Squad. Meanwhile, Amanda Waller promotes Katana to team leader as Katana voices out she doesn’t trust Waller.

As the Suicide Squad settles down for the night, a droid breaks into Belle Reve prison and targets Waller, who is rescued by Deadshot, who has now become Waller’s bodyguard. The droid, which has the word “Argent” stenciled on the side, is examined and is found to have been launched from somewhere in space and has a hard drive with a map of an airfield for a testing facility in Groom Lake, Nevada.

The team splits up, with Katana, Harley Quinn, Killer Croc, and Captain Boomerang blast off into space to an old decaying space station which also has “Argent” written on the side.

Meanwhile Deadshot, Enchantress, and Diablo are in the Nevada desert repelling from an aircraft towards the air field. The team searches the airfield, which is full of old warplanes and appears to be deserted when a mysterious man in white appears unseen in one of the cockpits.

Back on the space station, Katana and her team are attacked by a purple creature which leads to the team then being surrounded by attack robots. The purple creature is told to stand down, and changes into a humanoid creature that a voice off panel refers to as “Argent”. The figures are revealed to be Rick Flag, the grandfather of the Squad’s fallen comrade, and his partner, Dr. Karin Grace, who introduce themselves as the original Suicide Squad.

In the back up story, all two pages of it, finds Deadshot and his half of the team continuing to explore the airfield when they run across an old diary written by King Faraday, who ran an organization called “Argent” and explaining that he about to explain everything he knows about Task Force X.

Analysis: Much like the other titles involved in the Gotham Resistance cross over, this issue picks up to where things left off in the series without any sort of reference to the crossover series. Everything is back to the status quo from issue #25, with the various members of the Squad in their cells and Amanda Waller still in charge running things.

Writer Rob Williams does attempt to set up that the previous arc ended with some consequences, with Waller putting Katana in charge after Harley’s brief tenure as team leader. Putting Harley in charge is a move that made sense, considering that she is by far the most popular character in the book and having the book revolve around her character made sense. I can’t help but wonder what the point was in putting Harley in charge in the previous storyline only to hand the reins over to Katana now.

I find myself to be puzzled about what exactly Katana brings to the team dynamic besides keeping the team more or less the same as what was portrayed in the movie. Katana is traditionally a more heroic and honorable character than essentially anyone else in this book and its getting to be a bit of a stretch that she would continue to take her marching orders from Waller. It would be interesting to see her more conflicted, especially if Katana is going to be more of a focus in this series going forward. As it stands, Katana doesn’t do anything interesting here, and seems to be in the issue to give Waller someone to monologue to.

As for this new storyline, sending the team into space is a fun idea, and I enjoyed that Williams steered right into the references and clichés of this kind of story, such as the nods to Alien and 2001. I also appreciate that the creators are attempting to instill this book with a little depth and history by bringing characters that date back to the 50s, like King Faraday and Rick Flag Sr and reincorporating a little of the history of the book. Its almost as if Suicide Squad just got the memo that DC sent out about the rebirth relaunch.

As for the art, the main story pencils, handled by Barnaby Bagenda, are by in large well handled. I did find the sequence of the droid targeting Waller and being taken out by Deadshot is slightly confusing and I had to go back and read the sequence as it felt like it was missing a page or at lease a few panels in the middle of the sequence. I did enjoy the throw back designs of the robots in the space station, which look like something out of a 1950s science fiction story. As for the back up art by Wilfredo Torres, it’s hard to judge two pages of art. Having a backup that small makes it feel completely unnecessary and I fail to see the point of breaking the story up this way.

Final Thoughts: This story is a bit of a mixed bag, but there are some interesting ideas. The series has been very up and down and I’m curious to see which way the next issue will go.