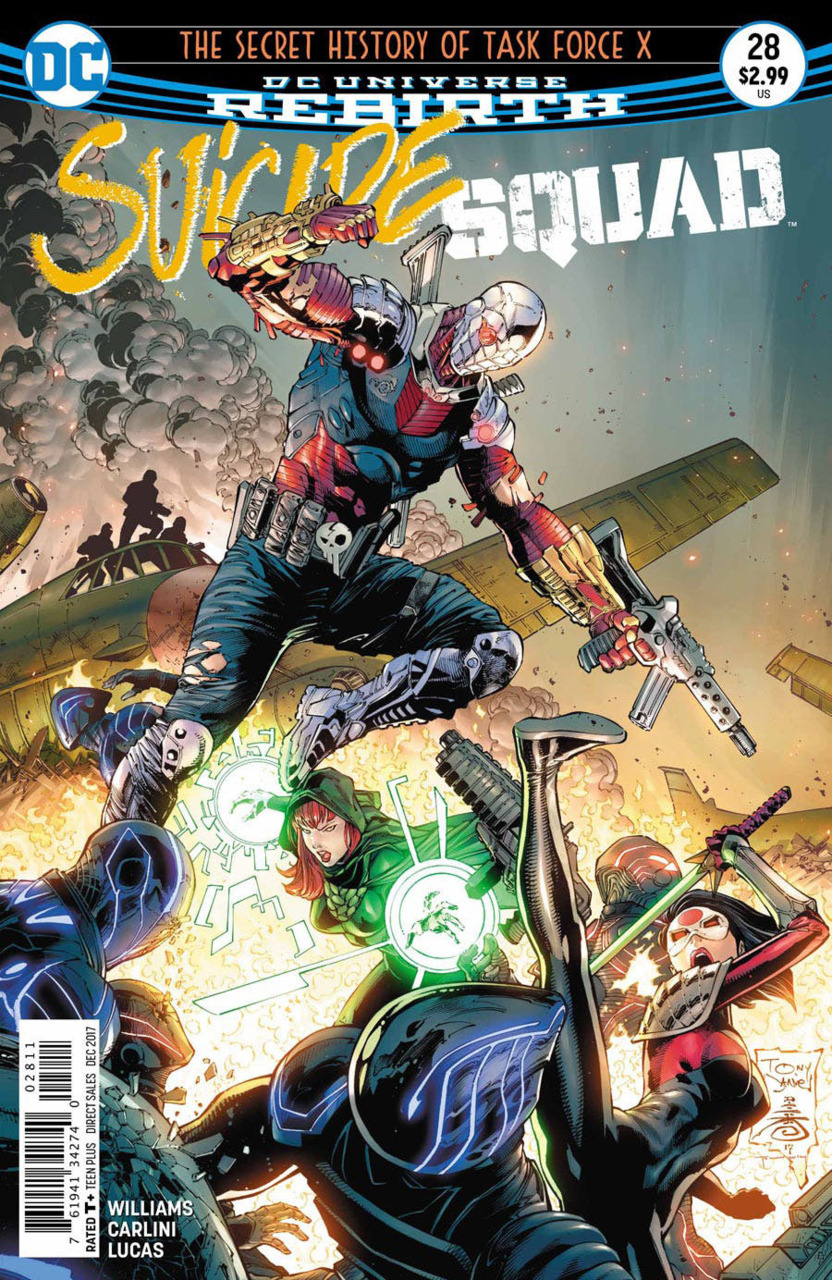 Overview: The Suicide Squad’s mission in space continues as they meet Rick Flag Sr. and embark on a mission to the moon.

Synopsis (spoilers ahead): The story opens on the defunct Task Force X Space Station with Harley Quinn, Captain Boomerang, Killer Croc, and Katana meeting with the deceased Rick Flag’s grandfather, Rick Flag Sr, who along with his partner, Dr. Karin Grace, tells the Squad that he needs them to go on a mission to break into the moon.

Meanwhile at an abandoned airfield in Nevada, Deadshot, Enchantress, and Diablo are pinned down in the wreckage of an old plan as killer robots surround them, firing lasers.  Enchantress tries to teleport the group away, but is overcome by a powerful force that she senses, warning that there are two parts of a powerful force that cannot be put back together.

Back in space, Flag Sr explains that purple alien that attacked them is Argent, a shape-shifting extraterrestrial that they encountered on a mission that suffered a brain injury and appears to be under Flag Sr and Grace’s control.  Flag Sr goes on to explain that he did not wish to kill Waller with the robot from the previous issue, and only wanted to get her attention.  Flag Sr and Harley have a private moment where Harley tells Flag Sr about the death of his grandson, with Flag Sr explaining that he’s already knew as he has been monitoring the Squad’s activities.

The Squad initially refuses to help Flag Sr, who then overtakes Quinn, Croc, and Boomerang by taking control of their brain bombs.  Flag Sr the convinces Katana to go along with the mission by appealing to the memory of her dead husband.  Flag Sr, Argent, and the Squad then blast off in a ship for the moon on a mission to kill the Red Wave Monster.

Back in Nevada, Deadshot and his team are saved by the arrival of Amanda Waller and a team of soldiers wearing battle armor.  The story ends back in space as the ship lands on the Moon, with Flag Sr explaining that the mandate of the original Suicide Squad was to protect the earth from alien threats, explaining that they locked up all the threats on the moon.

In the two page back-up story set in the 1950’s, King Faraday arrives at Groom Lake Nevada and enters a hanger containing an immobilized Starro the Conqueror and meets Flag Sr and the other members of the Suicide Squad.

Analysis: This story appears to be an attempt at giving the Suicide Squad some depth and history to it by bringing in a secret history.  The story plays the more cosmic stories about alien invaders that was a frequent topic of comics in the 1950s and I enjoyed the classic sci-f touches throughout the story, most notably the killer robots in the Nevada scenes.  The back up story does a not so subtle nod to the late Darwyn Cook’s classic New Frontier story which I also appreciated.

Flag Sr. is clearly not what he seems in the story.  There is a moment when Harley questions Flag’s sanity having been locked in isolation with only one other person for decades, to which Flag quickly turns the tables on Harley before walking away.   The mission that Flag Sr wants to send the Squad on seems inherently flawed and as written, the reason whey they are going on this mission isn’t clear.  If the monster needs a piece of its heart back to get to full power, I question the need to go to the moon and kill it.  There’s nothing explaining how it could pose any sort of threat, and the only explanation I can think of for this is that Williams is planning some third act twist where Flag Sr has gone mad and that his motives are not what they seem.  I understand the need to keep some mystery going as the story moves along, but in this case I think not defining exactly what the Squad is doing in space hurts the story and makes whatever twist that is coming stick out like a sore thumb.

Harley gets a nice moment where she has clearly not come to terms with the death of Rick Flag and her feeling for him.  As this is comics, I wonder if this is leading to something down the road when Flag is inevitably revealed to be alive.  The only other character to really get some time in this issue is Katana, who is shown to be a character still very much haunted by the death of her husband, and I liked how she is about not feeling her husband’s presence in the Soultaker sword.  I feel that Katana is often played too mysteriously and I would like to see her more explored in the book, as she is now the only member of the Squad that is there by choice.

The art by Eleonora Carlini in the main story and Wilfredo Torres in the backup story both do a good job of embracing the more retro science fiction elements of the story.  I do find Carlini’s work to feel a bit rushed and inconsistent, with some panels appearing to have a lot more care and detail then others.  Torres’ style is a nice compliment to the New Frontier-style backup story although I do still wonder what the point is in a two-page back-up story.

Final Thoughts: There are some nice touches in this story that play in the early history of the DCU, but ultimately the story would have benefited from fleshing out the main plot.  We’ll see where this goes next issue.