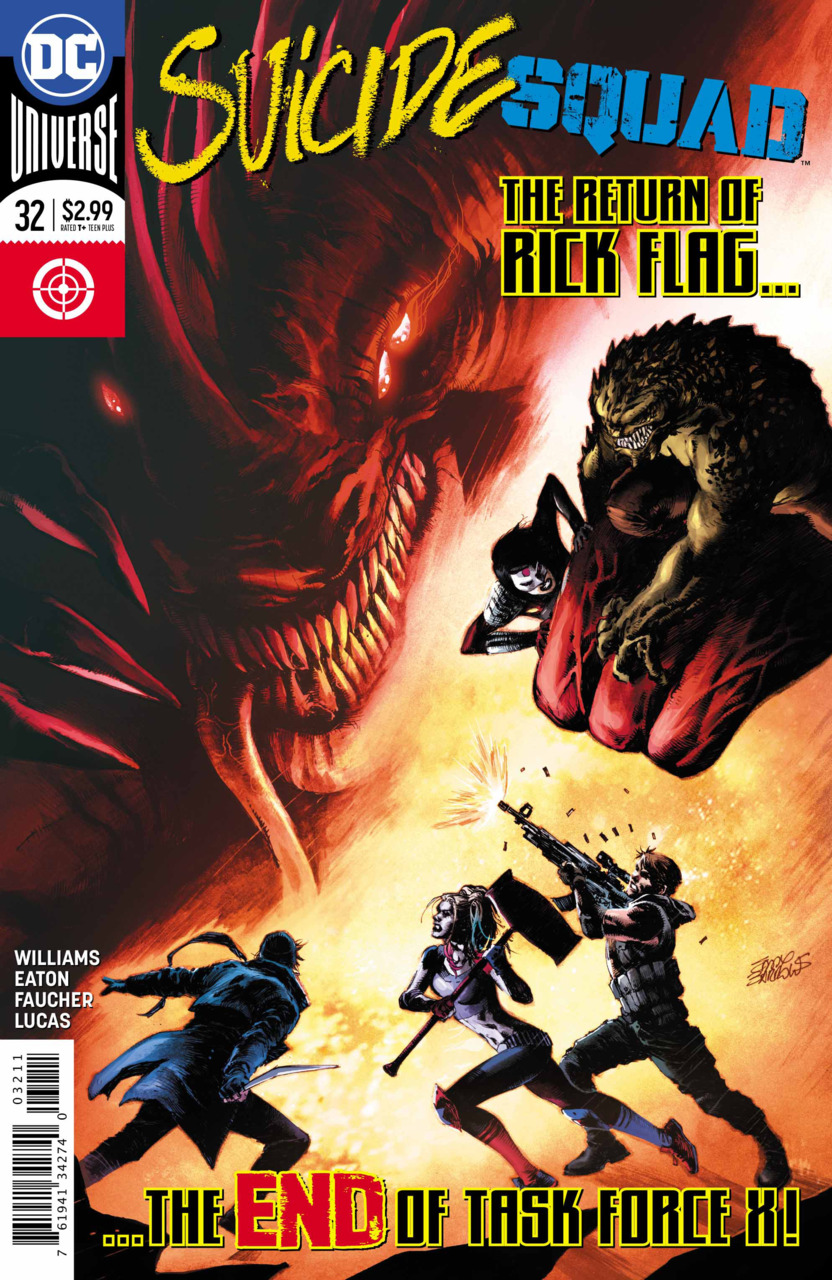 Overview: The story arc comes to a close as the Suicide Squad race to escape the moon and kill the Red Wave Monster.

Synopsis (spoilers ahead): The story opens with a flashback panel to June Moon teaching Killer Croc to read back in their cell before moving back to the present, with Rick Flag and the Suicide Squad in a shuttle trying to escape the Task Force X Secret Vault on the Moon while a gateway to the Phantom Zone rushes towards them.  The team radios to Karin Grace, who can shut the door to the vault from her spacecraft.  Karin is occupied, however, with speeding her ship into the sun to destroy the Red Wave Monster, which is clawing at the hull of Karin’s ship as Task Force X robots attack it.  Flag convinces Karin to shut the door to the Vault as the Suicide Squad narrowly escape and Flag order the shuttle to go after Grace’s ship.

Meanwhile, in a cavern beneath the secret Groom Lake, Amanda Waller speaks with King Faraday, who has been trapped at Groom Lake with a piece of the Red Wave Monster’s heart which kept him alive all these years, and had been controlling him, which Enchantress is able to break him free of temporarily.  Faraday explains that the monster forced him to send Task Force X members to the moon to try to free the monster over the years, leading to him sending the Suicide Squad to the moon.  The conversation ends with Enchantress having a vision of Killer Croc dying.

Back in outer space, as they approach the sun, Flag orders the reluctant squad to attack the monster, threatening to detonate their brain bombs if they don’t follow orders.  Flag originally tries to order Harley to stay on the ship, stating that he doesn’t want to loose her, with Harley demanding no special treatment and that he’s already lost her.  The team then leaves the shuttle and attacks the monster, with everyone tethered by cables to the ship.  During the fight, Killer Croc catches fire and gets caught in the monster’s mouth. Flag orders Croc to be cut loose and Katana proceeds to unclip herself from the cable and drives her sword into the Red Wave Monster’s brain, killing it and the team escapes and makes it back to earth.

Three days later at Belle Reve Penitentiary, Waller speaks with Karin and Faraday, who are still infected by the Red Wave Monster and have been imprisoned by Waller.  Killer Croc, recovering from being badly burned, has turned back into a savage beast and lashes out at June Moon when she comes to visit him.  Flag visits Harley at her cell and Harley tells him that she never really cared about him.  Flag calls her a coward and a liar and leaves, with Harley screaming that Flag is just as much a monster as everyone else.

In the “back up”, Faraday and Karin speak from their cells, with Faraday convincing Karin to use the powers that they have developed after the exposure to the Red Wave Monster.  Karin walks through the walls of her cell, with Faraday refusing to come with her, saying that he doesn’t believe he can trust himself.  Karin leaves, with Faraday speaking to the surveillance cameras that Karin won’t be a threat to anyone and that Waller will never find her.

Analysis: This issue wraps up another story arc, and with it sets everything back to zero.  It’s one of the things about this book, that it seems to be reluctant to stray to far from it’s formula.  Its like an episode of the Simpsons.  Its doesn’t matter what happens in the story, in the end you know the Simpsons are going to end up back on that couch and everything’s going to be back to normal.  Flag returns to the book.  Killer Croc is returned to his feral state.  The core concept of this book is a group of super villains that have been forced into becoming heroes, and while I wouldn’t want to see the book turn into something its not, it’s frustrating and frankly a little boring for the book to not seem to want to grow or change. There are many other ways to have the team want or be forced to stay a team and send them on missions beyond the continual threat of the brain bomb.  Have the team escape Belle Reve and be on the run from Waller for instance.  Let’s be honest, Flag being found alive and well is no surprise to anyone and it’s that kind of lack of willingness to move the book forward that gives “deaths” such as that one no stakes whatsoever because you know it isn’t permanent.

Rick Flag returns and immediately slips back into his roll as the team’s leader/jailer.  The book quickly ties up the loose plotline of Flag’s relationship with Harley, with Harley immediately rejecting him.  Harley seems to take great exception to Flag putting the team in danger to complete their mission, to the point of screaming that he is just as much a monster as the rest of them at the end.  On the surface this seems totally unreasonable but the book does a decent job of suggesting that Harley is just looking for a reason to distance herself from Flag and what would probably be a fairly stable relationship, to the point of Flag calling her a coward in the end.  It’s another reminder of how damaged Harley is and how unlikely it is that she would make a choice that would give her a happy ending.

I’m still unclear as to what exactly the plan was in sending the Suicide Squad to the moon, as the story doesn’t appear to be following its own rules.  Faraday explains that he’s been under the influence of the Red Wave Monster for years, sending Task Force X teams to the moon to free the monster from the vault.  But then Faraday says that as he felt himself more controlled by the monster, he sends the team to kill the monster.  Much like Karin Grace in the previous issue, the degree to which characters are controlled by the monster throughout this story seems to vary based solely on what is most convenient for the story.

The art, with Scott Eaton penciling and Wayne Faucher inking, and Wilfredo Torres handling the last two pages of the issue, do a good job with what is asked of them, with Eaton handling the action sequences well.  I still have no idea why the story required a series of two-page backups in each issue.  It’s information that could have been easily given in the main story and its not enough work to have been there to give the main penciller a break, which also makes little sense since the book doesn’t have a consistent artist on the book.

Final Thoughts: This is a book that continues to play it safe and as long as that is the case, it’s never going to be more than mediocre.