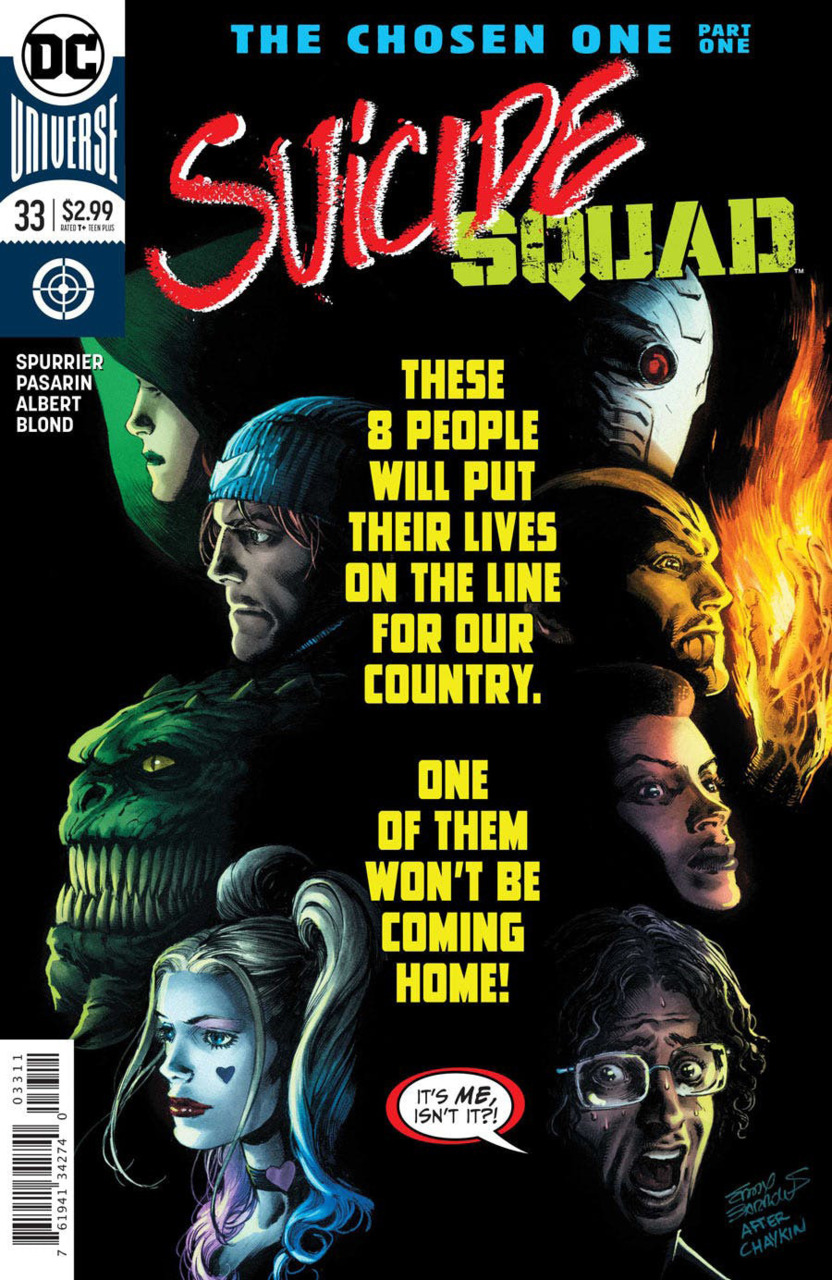 Overview: The Suicide Squad takes on a new member as they fight off an alien invasion.

Synopsis (spoilers ahead): The story opens with the Suicide Squad on a mission against an alien menace with a panicking new member, Juan Soria.  The story then flashes back to Belle Reve prison where Soria is conscripted by Amanda Waller.  The story then moves back to the present where the Squad are aboard some sort of alien vessel that has landed in a theme park in Orlando, Florida.  The Squad is accompanied by several red suited “volunteers” like Soria.  The Squad is fighting off the hoard of insect like aliens while Boomerang is trying to pry open a door.  Soria displays an ability to open up any lock and as he works on opening the door, Killer Croc gets impatient and smashes through the door.  The Squad continues to fight through the aliens as the story flashes back again to Soria growing up idolizing the heroes of the Justice League.  A warehouse accident when he was twenty leaves Soria with nanites living in his hand that allow Soria to open any lock.  Soria applies to become a Justice League member and is rejected and turns to crime, and is quickly apprehended by the Justice League and sent to prison.

Back on the alien ship, Waller reveals that the teams mission is to fight off the aliens as loud as they can to serve as a distraction while Rick Flag, Katana, and Deadshot sneak into the alien base via jet pack to quietly investigate the threat. The squad has been provided with extra “volunteers” which are to be used as cannon fodder while they fight off the aliens.  The volunteers are quickly slaughtered by the aliens.  Soria thinks back to his first night in Belle Reve, but in the present, Soria and two other volunteers find the discarded jet packs that the stealth team used to sneak onto the base. They are attacked by a larger group of aliens, which kills the other two volunteers and shoot off Soria’s hand.  The Squad’s core members witness this and decide to step back and see what will happen next and the issue ends with Soria surrounded by the aliens as the dead volunteers are being consumed by the aliens.

Analysis: This issue plays with the “red shirt” gag made famous in episodes of the original Star Trek television show, where anytime Kirk and the rest of the main cast would beam down to a planet, there would inevitably be a nameless red shirted crew member that would die a horrible death in the first few minutes of whatever mission they were on.  The term “red shirt” has become a pop culture term and I like the idea of an issue of Suicide Squad building a story arc around the concept.  I do however, wish that they had been a tad subtler about it.  Writer Si Spurrier chooses to drive this idea home at every turn, with Soria essentially spelling out in crayon the whole concept.  It comes across as forced, as the middle of a fire fight probably isn’t the best time for a Star Trek discussion and I feel the creators should have trusted that the readers were smart enough to get what they were going for without putting up the neon signs.

The concept is an interesting one to play around with in this particular title as the Suicide Squad are a group of characters that would not be terribly concerned with the well being of the red shirts being sent along with them.  I find the plot point of the Squad actually stopping to watch what the aliens do is entirely appropriate with this group of characters, who aren’t necessarily going to do the heroic or noble thing in that situation.

The main character of this issue, Juan Soria, isn’t particularly compelling and is a fairly cookie cutter character, which I think is probably what Spurrier was going for, as if he is going to be a red shirt, he kind of has to be unremarkable.  I’m interested to see if they are any left turns coming as this storyline progresses.

The art by penciller Fernando Pasarrn and inker Oclair Albert do a good job with the action heavy nature of the issue and the large amount of character work that the title requires. The colors by Blond also add to the overall action and help the art become more than generic.

Final Thoughts: The issue is quick and action heavy and while I thought it was a bit on the nose, I enjoyed it.