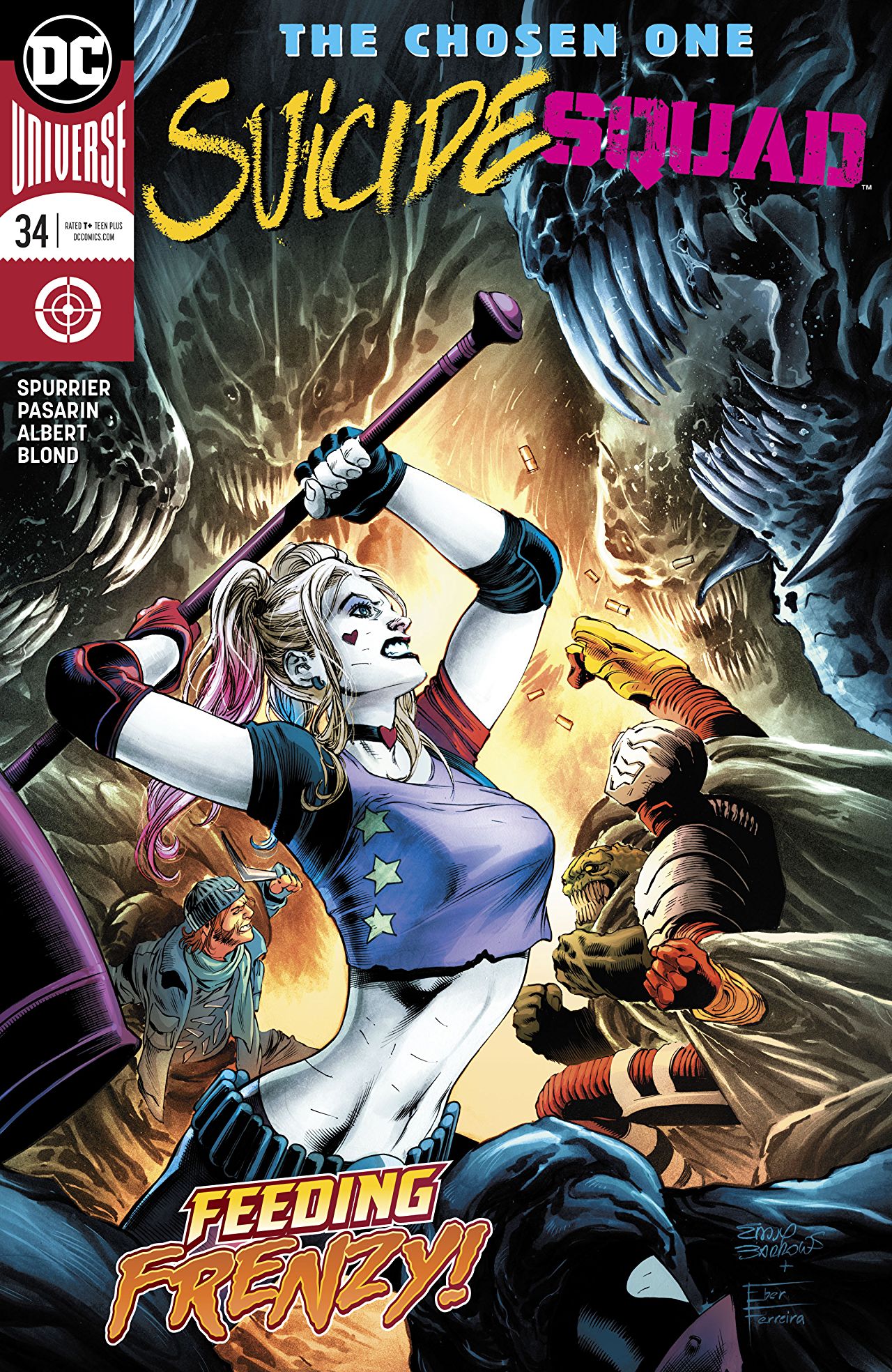 Overview: The Suicide Squad and their newest member, Juan Soria,  face off against an alien invasion.

Synopsis (spoilers ahead): The story picks up from the previous issue, with the Suicide Squad infiltrating an alien ship that has landed at a theme park in Orlando.  The Suicide Squad’s newest recruit Juan Soria watches as two other recruits are being telepathically drained by the insect-like aliens who inhabit the ship and just before Juan faces the same fate, he is saved by a Killer Croc and Deadshot.  The team continues into the ship, looking for an even bigger alien while Juan thinks back to his training before the mission, where he was essentially ignored by the other recruits.

In the present, Juan is attacked by another alien, who bites down on Juan’s remaining hand (having lost his other hand in the previous issue).  Juan is rescued by Katana, who solves the problem by cutting off Juan’s remaining hand.  Juan then thinks back to meeting the Suicide Squad’s core members for the first time, with each member barely acknowledging Juan’s presence.

Back on the alien ship, the team located the alien queen’s lair and decide that someone needs to act as a distraction so the rest of the team can take it down.  Juan, resigned to his fate as cannon fodder, ignores the suggestion of the team to draw straws to decide who should be that distraction, walks off towards the Alien Queen’s nest.  Juan is confronted by the massive alien queen, who attaches itself to Juan’s brain, only to the shrink away to nothing and be promptly squished under Juan’s boot.

The story then cuts to Juan meeting with Amanda Waller, who explains that the aliens fed on happy emotions, so Task Force X selected Juan and molded him into the perfect storm of negative emotions to neutralize the aliens.  Waller promises to compensate Juan with cybernetic replacements for his missing hands and a reduction in his sentence, and the story ends with Juan meeting his new cellmate, a hungry Killer Croc.

Analysis: Much like most other fill-in issues, this storyline has been fairly self-contained.  Writer Si Spurrier has crafted a quick story featuring the Suicide Squad that seems to be more or less unconnected to what has been going on in the title, and is likely to have little impact on things going forward.  While I understand the need to give the regular creative team a break on a bi-weekly title, I find myself wondering what was the point of both this issue or this storyline in general.

The most important element in telling any story is making the reader or audience get invested in the characters.  Its one of the most basic rules of storytelling.  If you don’t have anyone to root for in a story, its hard to be interested enough to come back month after month to read more about those characters.  Who exactly am I supposed to be cheering for in this story?  The Suicide Squad are definitely not the focus of this issue.  Juan Soria is a hopeless and disposable character who seems to serve no purpose other than to highlight that Task Force X is entirely made up of terrible people who will ruin someone’s life without a second thought.

The main character of this story, Juan, feels utterly disposable.  He only seems to be there to be kicked around and demeaned by the rest of the team in pursuit of turning Juan into the DC Universe’s version of Homer Simpson’s ill-fated co-worker, Frank Grimes, a hapless loser who can’t catch a break, and in this case weaponized to deliver a negative bomb to the emotion guzzling Alien Queen.  I have to wonder why the story chose to focus on this character, especially given that the last panel of the story seems to suggest that Juan’s fate might be as Killer Croc’s latest meal.

Its an ongoing problem with this title.  The creators spend so much time trying to remind readers that Task Force X is made up by convicted criminals that they forget to make these characters likeable at even the most basic of levels.  Even traditionally heroic characters such Katana have found themselves compromised by being a part of this world.

The art by Fernando Pasarin is well done, with the artist handing the action sequences well.  Team books always tend to present an interesting challenge to an artist and Pasarin steps up to the challenge admirably.

Final Thoughts: This issue was pointless and I didn’t enjoy the unrelenting negative tone of the story.  Juan Soria may not belong in this story, but neither does anyone else.