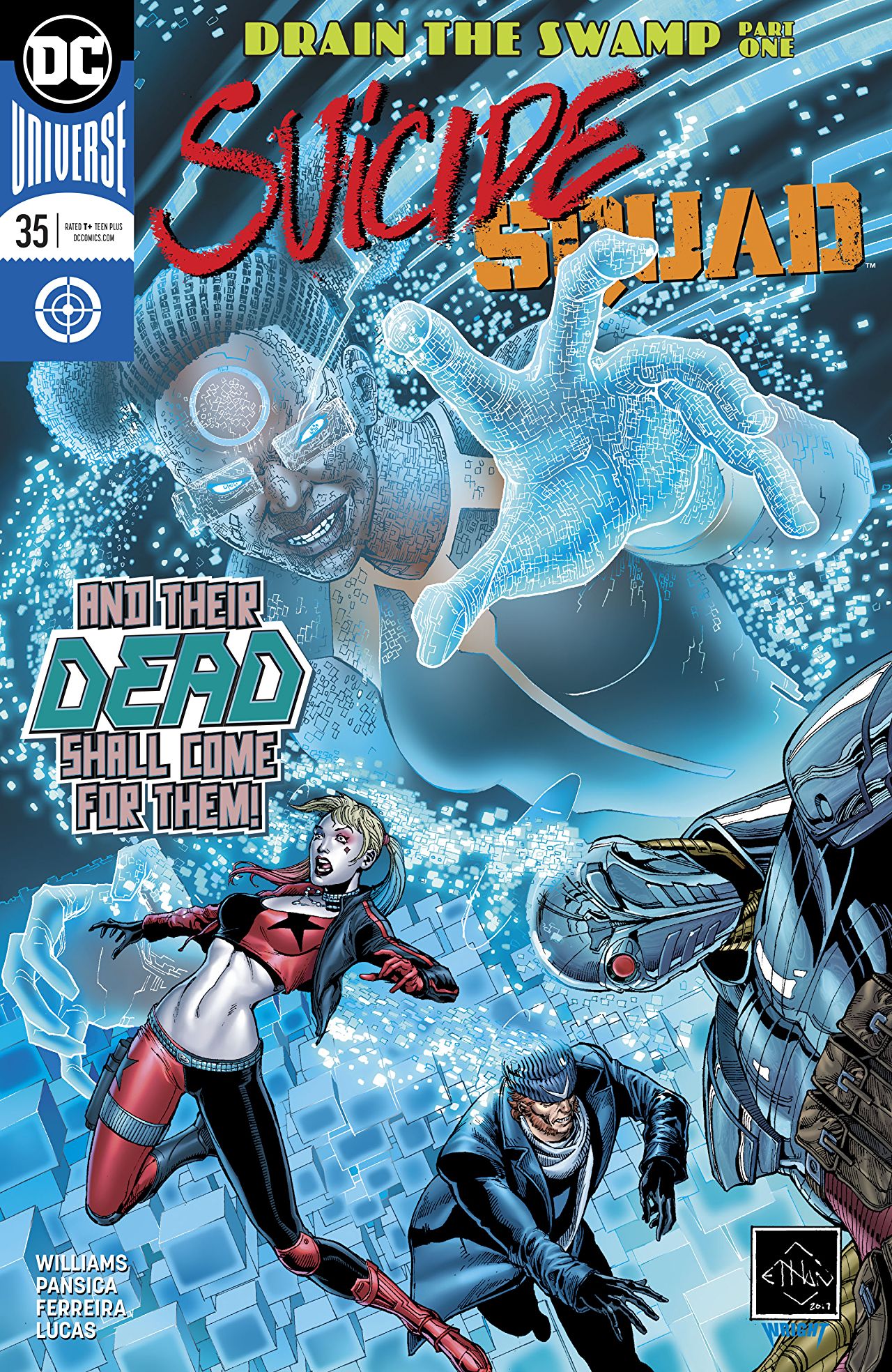 Synopsis (spoilers ahead): The story opens with a media introduction of the US government’s new government-funded super soldier, code-named “The Wall” aka US Navy Captain David Prohaska.  It then cuts to Amanda Waller watching the media coverage from her office at Belle Reve Prison.  Rick Flag walks in, pointing out that the new super soldier program is a giant dig against Waller and Task Force X.  They reveal that Flag has chosen to transfer to this new super soldier program, leaving Task Force X because he takes issue with Waller’s reckless behavior and secrets.  As Flag walks way, Waller’s screen flashes with electricity before Harley Quinn calls in to update Waller on their new mission.

The expanded team, which now includes Giganta, Solomon Grundy, and new casualty Parasite, are on a “recruitment mission” to capture the villain Damage, who the team battles on a destroyed city street.  The battle is not going well, and as communications cut off with Waller, she remarks to herself that “it’s all ending” and visits a feral Killer Croc, the catatonic June Moon, and the imprisoned King Faraday, who has become a sort of advisor to Waller and has been going through the Task Force X team files.  Faraday finds a missed appointment from seven days ago labeled “Coretta,” causing Waller to leave the room and board a helicopter.

Waller makes her way to a hospital where it turns out that Waller has missed the birth of her daughter Coretta’s first child, and that Coretta doesn’t want to see her.  In Waller’s limo on the ride back, her phone is taken over Hack, whose consciousness has been living in the Task Force X computer system.  Hack cuts off Belle Reve’s communications, stating that she is going to find out who murdered her and burn Belle Reve to the ground. The issue ends with the image of Hack appearing in the Belle Reve control room as the Task Force X staff lay dead and bleeding around her, with Hack stating that she is Belle Reve itself.

Analysis: One of the biggest criticism I’ve had of this series as a whole is that it has been very episodic.  I’ve never liked how no matter what happens, the Squad seems to return to their cells and back to the same status quo and I think there have been missed opportunities to move this book into new directions.  It’s with this in mind that I was pleasantly surprised with the direction that this issue takes.  I think the idea of Amanda Waller facing some personal and professional consequences from the years of terrible things that she has done to be a refreshing change of pace.  Waller has always been the real villain of this story, whose terrible actions doesn’t outweigh the good that she believes she is accomplishing and I think that there is a lot of mileage you can get out of having the bill for her actions finally coming due.  I like how they show that Waller is being assaulted on all fronts, having fallen out of favor politically, with her own team, and that her personal life is in shambles and picking this moment to have Hack return to wreak havoc on Task Force X fits well into the story.

Now, let’s talk about the elephant in the room.  There are some fairly obvious and overt references to Donald Trump in this issue.  Even the title of this new arc, “Drain the Swamp” is a clear reference to one of Trump’s election campaign slogans.  There is a long history of adding political satire into modern comics.  The Dark Knight Returns is on some level’s a four-issue satire of Regan’s America in the 1980s.  Batman: White Night has so far been a brilliant essay on crime, race, and class in our society.  Where Frank Miller and Sean Gordon Murphy succeed is that they have a point of view to argue through their books and where I think this book fails is that this it makes heavy-handed references to a political figure but doesn’t seem to have any particular point to it beyond just wanting to make the reference.  No matter what your politics are, I think it’s fair to say that the current US President is a very polarizing figure, and if you are going to take the time to make very clear and overt references and name a story with that figure in mind, then I think there should be a greater reason to throw it in there.  As it stands, it feels distracting and overly winky and just doesn’t need to be in there.

I do also think that the back half of this story would have been more effective if they didn’t tell everyone on the cover that Hack is the villain of this arc.

Eduardo Pansica’s pencils are fantastic.   There’s a portrait quality to how he draws the character’s faces that makes them feel a little more lifelike than a typical comic.  I especially liked the quieter moments with Waller alone or being rejected by her family which I think are well executed and emotional.

Final Thoughts: I like the new story arc and I’m curious to see if there are any long-term effects or consequences that are going to spin out of this story.  I’m very curious to see how this creative team handles the next issue.