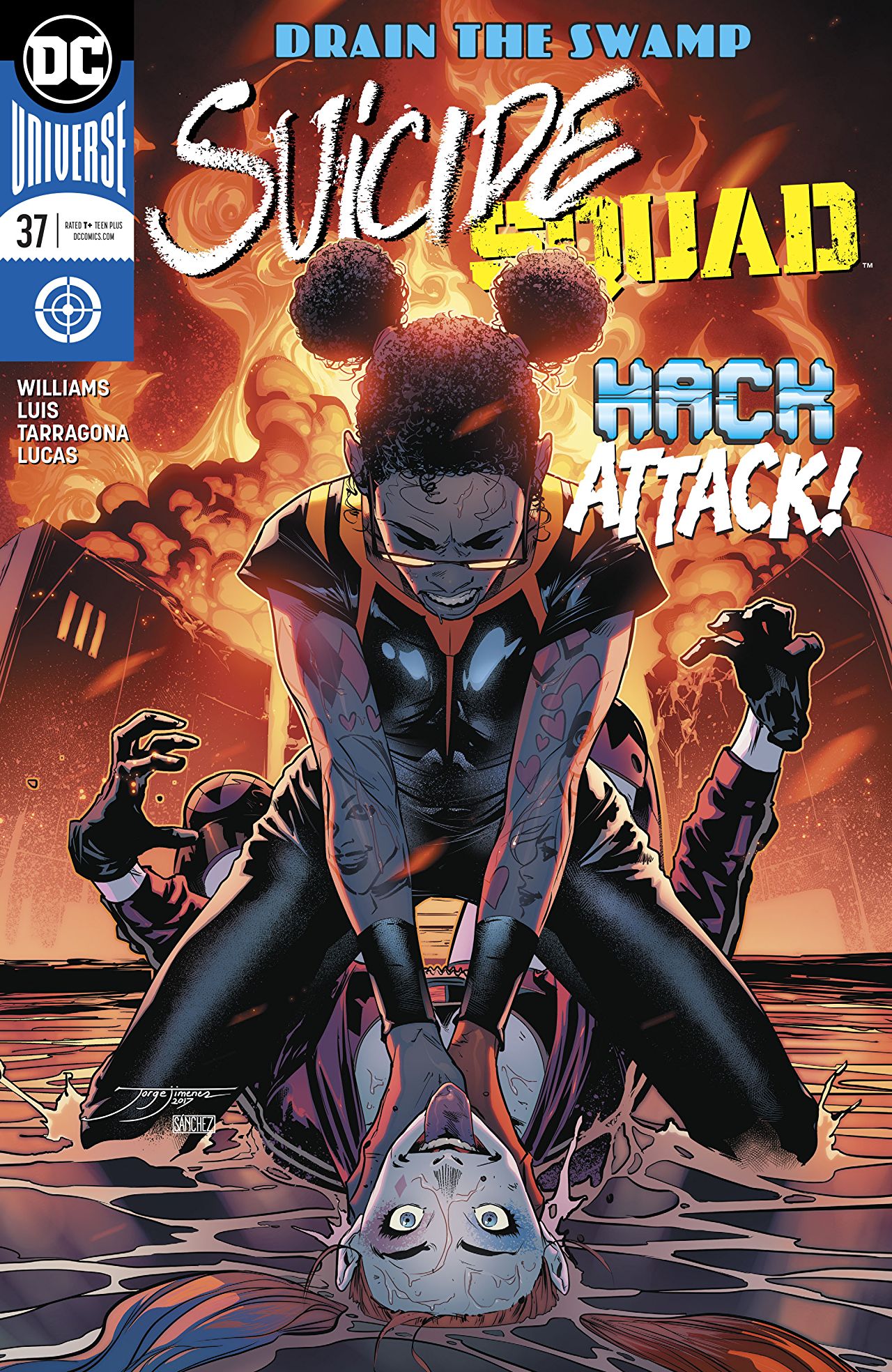 Overview: Hack pulls the Suicide Squad into the digital realm to find her killer.

Synopsis (spoilers ahead): The issue opens with a flashback to the slums of Nairobi, where a young HACK is forced to crack phones and break into phones by a gang.  The story then flashes to the present were Hack screams Amanda Waller’s name as the computer servers at Belle Reve explode into flames and the Suicide Squad lies unconscious at Hack’s feet.  Outside the prison, Waller rallies her troops to enter the prison and pull out any survivors and requests that the Wall attend for back up.

The Suicide Squad awakes to find themselves pulled into the digital world by Hack.  Hack sends Faraday back to the physical world as her quarrel is not with him, who is then arrested by Waller’s soldiers.  Hack then demands to know who it was that murdered her, threatening to delete them all unless someone tells her, with the Suicide Squad members refusing to tell her.  Captain Boomerang eventually steps forward and admits that he is Hack’s killer, stating that he is admitting to the killing because his teammates are his friends, causing the rest of the team to laugh.  Hack begins to torture Boomerang before sending the rest of the team back into the real world before the servers finish detonating and they are lost forever.

The team, minus Boomerang, appears in the real world surrounded by soldiers and Hack attacks the soldiers.  The Wall crashes through the ceiling and appears to destroy Hack with a digital virus gauntlet.   The Wall takes down the whole team with an energy blast and the issue ends with the Wall declaring that Task Force X has been shut down and he is their replacement.

Analysis: Issues like this are very frustrating.  You can see the good ideas in the story but it is in the execution where the book fails. The issue feels rushed in a way that does real damage to the story and makes events feel fairly meaningless. Hack’s return should be a big deal. It’s not. The idea of her pulling the team into the digital world is, while on its face ridiculous, has a lot of potential. The elements are all there.  The book puts the characters into a realm where the big bad controls everything, even their own existence, but other than some angry words and threats, nothing else really happens.  There is a lot of unused potential in this idea.  This digital world could have been any number of things pulled from Hack’s imagination.  Even the length of time the team is in the digital world could have been played with, with what would be seconds feeling like days to the team.

Boomerang admitting his crime also feels like a rushed afterthought and his fate is left far too vague.  There’s no moment were Hack deletes him or sends Boomerang somewhere to be tormented.  The team just reappears without him and no one thinks to mention that Boomerang is even gone once they return.  Not that it matters anyway, with the Wall showing up to apparently kill Hack with his Nintendo Power Glove, although I suspect the door is open for Hack to survive in some form.  Not taking the time to show Boomerang’s fate feels like the creators missed the point of their own story and if they weren’t interested in putting in the time to have the moments that make this story matter, then there is no point to doing it in the first place.

I think my biggest issue with this.. um.. issue, is that it feels more like housekeeping than it does a real story.  It’s no secret that Suicide Squad is going to be overhauled as part of the No Justice event that Scott Snyder is cooking up, and that probably leaves a lot of the creative teams in a position to quickly tie things up so the characters can go on an do something new without any baggage.  If that is the case, the book would have done well to focus on Hack’s return and Boomerang’s punishment without bringing in the Wall, which doesn’t really add anything of value to what is a bloated story.

The art by Jose Luis is like the rest of the book, competent but unremarkable.  There’s nothing stylish or dynamic that really stands out in his art and the digital sequences look kind of boring.  It’s the sort of opportunity where a better artist could have been let completely off the chain to do something interesting, but I do acknowledge that only so much can be done in the space of a few pages.

Final Thoughts: This could have been a very interesting story of revenge and past mistakes coming back to haunt Captain Boomerang.  As it stands, all it has done is make me want to watch Tron.