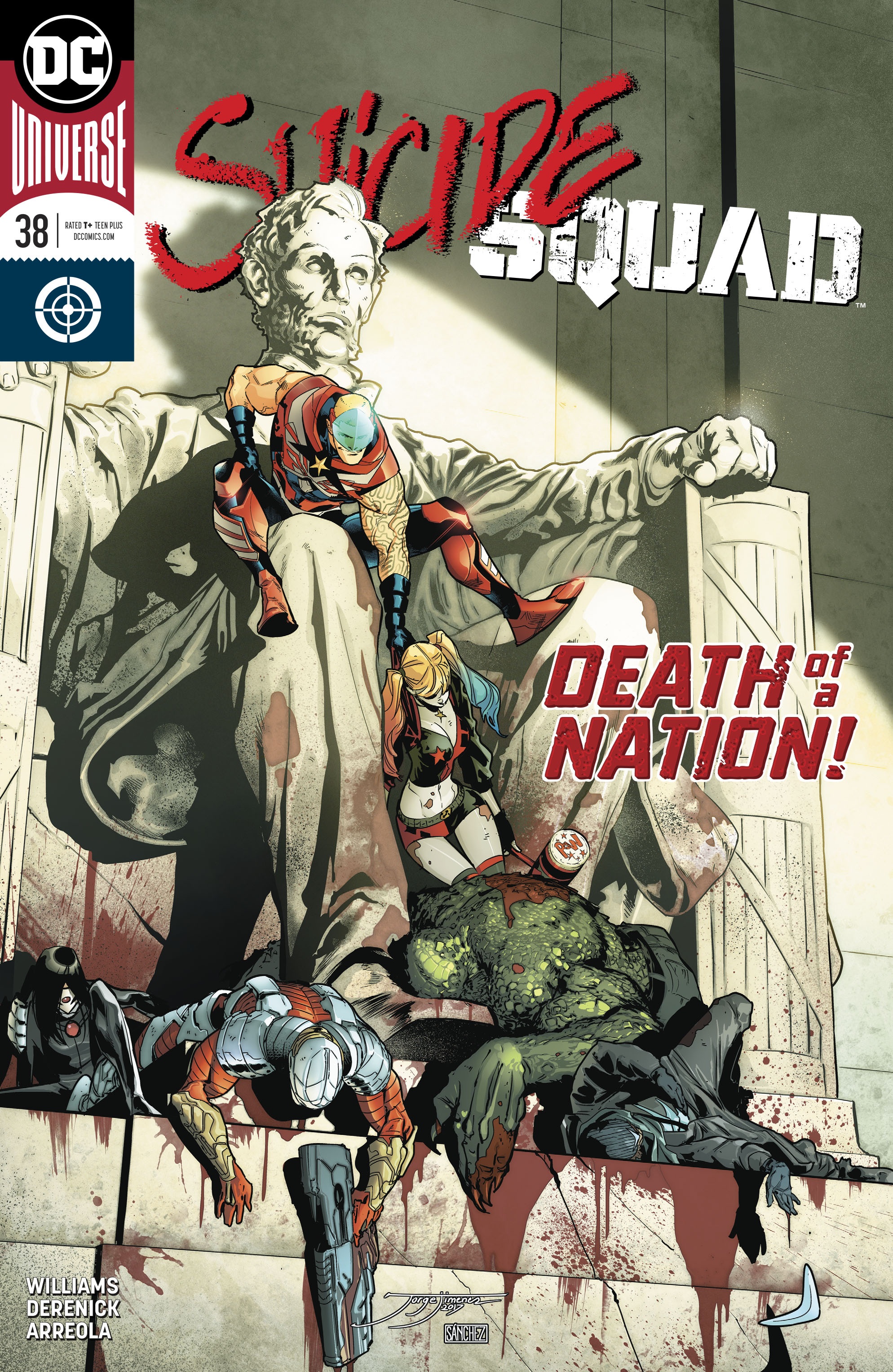 Overview: The Suicide Squad finds themselves disbanded and replaced by the new super soldier, the Wall.  But what happens when the government loses control of the Wall?

Synopsis (spoilers ahead): The story opens with the Wall flying over Washington D.C. as he talks with his handler, Rick Flag.  The Wall flies over a group that includes the US president, White House brass, and media before flying off on a media covered mission to take down a metahuman terror cell coming from Canada.  The Wall brutally kills the terrorists as the public watches in horror on their cellphones.

Meanwhile, at Belle Reve Penitentiary, Amanda Waller looks on in anger as the Suicide Squad is removed from her care.  The squad members, including a very much alive Captain Boomerang, are loaded onto jets bound for separate facilities.  Waller is left standing alone in an empty Bell Reve.

Flying back from his mission, The Wall becomes unresponsive and fires off an emp pulse, causing the fighter jets escorting him to fall from the sky.  The Wall then crashes down through the Pentagon and proceeds to download all of their files.  All over Washington D.C, people’s cell phones surge with electricity to the heads of the public and their eyes begin to glow white.  One person then broadcasts a message that a mysterious force has taken control of the parietal lobes of every living being in downtown Washington D.C. and that the only ones he will allow into the city are the members of the Suicide Squad.  The issue ends with Flag going to Harley Quin asking for one last mission.

Analysis: So… quick question.  Where did Captain Boomerang come from?   I went back and reread Suicide Squad #37 just to make sure.  In that issue, he’s being tortured by Hack and being digitized, and then the whole team, minus Boomerang, is transported back to be arrested by the government.  He’s not in a single panel after they are in cyberspace.  And now he just show’s up in this issue without any reference or payoff to what happened in the previous issue.

If I had to guess, and I have no way of knowing if this is accurate, but I think that Boomerang’s fate in the last issue was probably much more defined but after the art was finished a decision must have been made by either the writer or DC editorial to keep Boomerang on the table, and so all references to him being deleted or sent off into cyberspace or whatever fate they had in mind were removed.  Whatever the reason, it comes across as very sloppy and makes the murder of Hack subplot feel weightless, wasted and completely pointless.

Speaking of Hack, I think its more than likely that the “mysterious” villain who has taken control of the Wall is going to turn about to be a very much alive Hack.  It’s one of those situations where if it turns out to be anyone else it will feel like it’s coming out of left field and if it turns out to be Hack then it feels like what the point at prolonging her confrontation with the Suicide Squad?  We could have tied things up in the last issue with this character and if they are going to pull a fake death and return with Hack’s character, there should be more than half an issue before she shows up again.   We will have to wait till next issue to see what the deal is here.

I will say that I like the notion of the greatest punishment for a person like Waller, who has always known where all the bodies are buried, would be to be told that something was “classified” and that all her personal sacrifices have done nothing but make her alone and irrelevant.

As for the art, by Tom Derenick, it does what the story asks of it.  But there’s nothing dynamic or creative about anything in there.  The art has a generic feel to it that makes the story even less interesting than it otherwise would be.  Suicide Squad is a book that has always suffered from inconsistent art and this is just another example.

Final Thoughts: This book feels like it is just marking time until No Justice gives it a creative restart. I’d recommend that anyone looking to jump on to this title… Don’t…  Just Don’t.