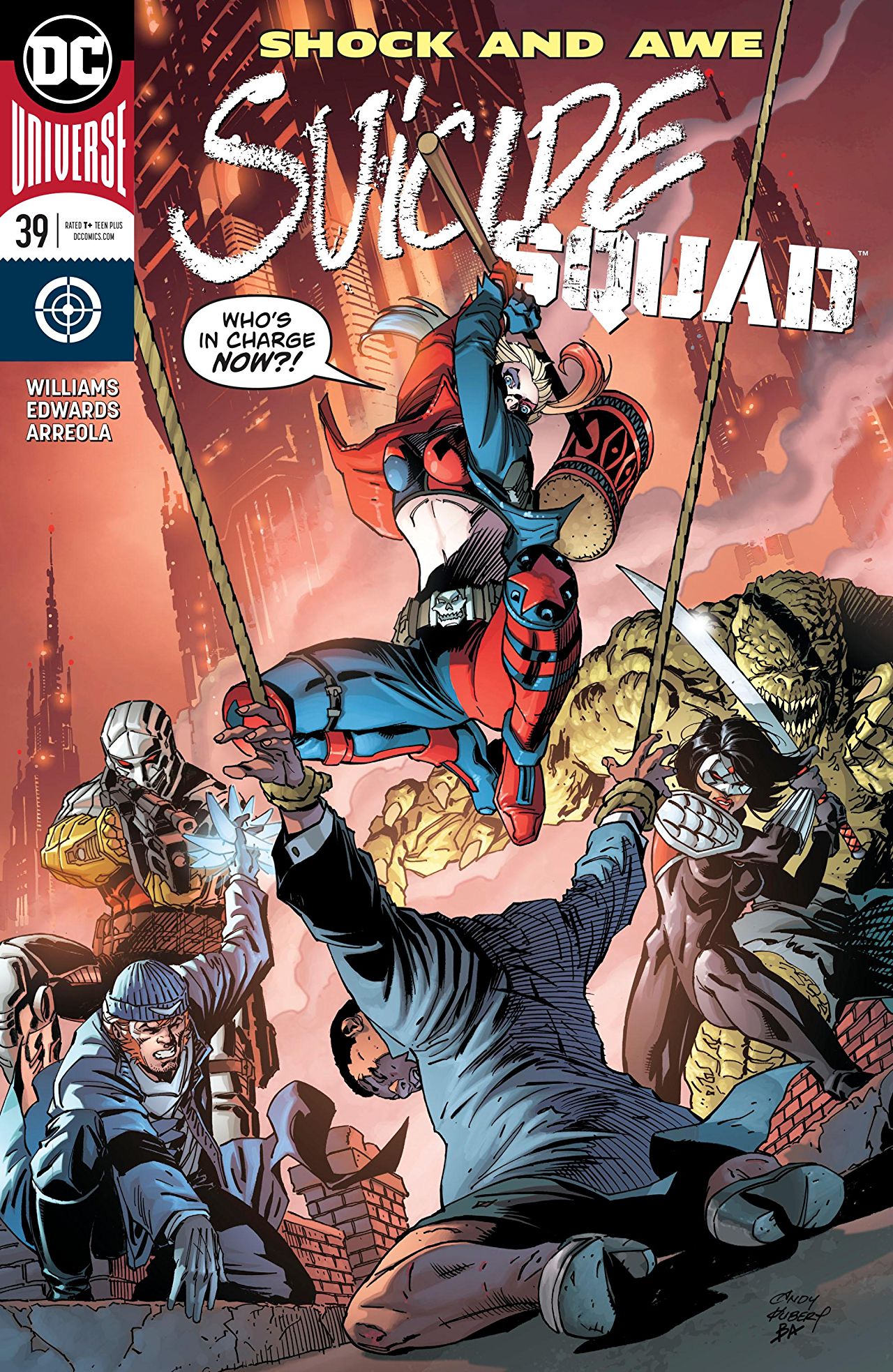 Overview: The Suicide Squad faces off against the Wall while the lives of everyone in Washington DC hang in the balance.

Synopsis (spoilers ahead): The issue opens with Rick Flag going to visit June Moon who agrees to go on another mission and becomes the Enchantress.  The team then reassembles and flies to Washington DC, where the US government super soldier has gone haywire and has taken control of everyone in Washington DC and is currently downloading every secret file in the Pentagon.  The Squad, including Flag and an assault rifle toting Amanda Waller, land and move towards the Pentagon, through a crowd of possessed people.  The crowd produces an energy blast and shocks Killer Croc, bringing back memories of being badly burned in space in the previous story arc, causing him to go on a rampage.

Enchantress moves to protect Croc, sending the possessed crowd through a portal to Hell.  The Wall appears, remarking on how everything Waller has ever done has just put people in more danger, and Flag and Waller remark that whoever this person is, it is not really the Wall.  The Wall produces an artifact that drags the Enchantress back to the dimension she came from, causing Croc to lose control and attack the Wall.  A battle ensues between the Wall and the Squad, leading to the Wall rocketing away after he finishes downloading the files that he came for.  The issue ends with the Wall then crashing into the wall of Amanda Waller’s daughter’s hospital room, with the Wall saying that he is there to kill her.

Analysis: This issue is fairly tight and well paced.  I like that writer Rob Williams didn’t waste time with a bunch of “getting the band back together” scenes in having the team reassemble to go on this new mission, because really, they are still prisoners with bombs implanted in there skulls so it isn’t like they have a choice.  The issue chooses to focus on June Moon/Enchantress, which telegraphs that they plan on doing something horrible with her.  I feel like the book doesn’t really know what to do with Enchantress.  She seems too powerful to be kept prisoner the way she has been.  I also feel like the book wants to explore her relationship with Killer Croc without putting in the time.  There is a lot of interesting places the story could go if it wanted to and there are questions about the two of them that hasn’t really be answered.  I’ve assumed it was June that had fallen for Croc, not Enchantress, and I think there is a missed story opportunity in exploring what exactly the evil witch from another dimension’s interest is in Killer Croc.

The only real fault I can find with this issue is that its part of a large storyline that feels stretched over too many issues.  The story is still trying to be coy as to who or what is controlling The Wall and you can feel the writer maneuvering the pieces of this story around to address Waller’s personal and professional problems.  Whether or not it is successful will really come down to what happens in the next issue.  If Williams has cooked up something new and unexpected, then I’m game to see where this all goes.  If, however, it ends up being something contrived like it being revealed that Hack is still alive and controlling the Wall when the whole story could have been resolved three issues ago, then this whole storyline will have been a waste of time and money.  Time will tell.

The art by Neil Edwards is a highlight of this issue.  There’s a detail and realism to Edwards’ character work that reminds me of Ultimates-era Bryan Hitch.  This is a book that has always suffered from inconsistent art and having a stable artist would do a lot to improve it, which is something we will hopefully see a lot more of once the book eventually goes monthly in June.

A confusing aspect of this issue is that the cover, with Waller, bound up with the Suicide Squad declaring that they are now in charge.  Now, I will always take an Andy Kubert cover, in fact, I wish he was doing the interior art, but while there is definitely no way that this cover will spoil anything in the issue, the cover should still have something to do with the storyline that is being told.

Final Thoughts: This is a fairly solid issue in a mediocre storyline.  It seemed like the book was headed for a creative change with the No Justice relaunch coming next month but that doesn’t appear to be the case.  I’ll be interested to see if this book turns a corner once this storyline is done.  At the very least Batman will be guest starring on the title in May.