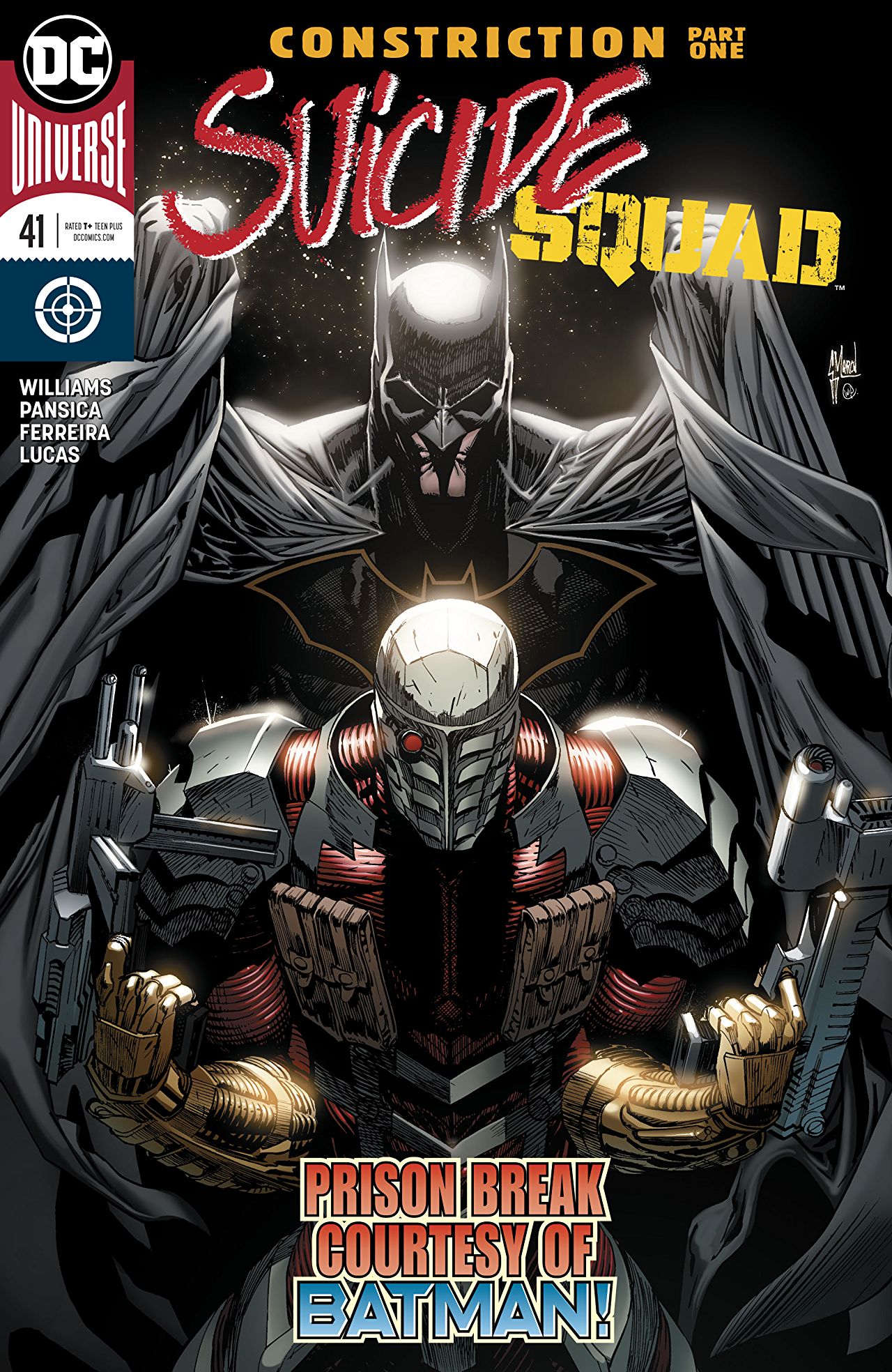 Overview: Deadshot’s daughter has been kidnapped by Kobra and is being groomed as the next leader of the cult group of assassins. He’ll have some difficulty doing anything about it from behind the bars of his cell in Belle Reve. If only there was a masked vigilante with the skills, the equipment and most importantly the desire to break him out.

Synopsis (spoilers ahead): We begin with Deadshot alone. He’s feeling introspective, looking back on the finer points of life as the world’s greatest paid assassin. Breaking things down into their most basic elements, he emotes on the concepts surrounding his profession. Skill. Accuracy. True acts of will. And he notes a chilling truth, that there’s something truly American about the commercial transaction in which you pay him and bang! Someone dies.

But all that aside, that’s not the main thing on his mind. In fact, he’s only concerned with one thing these days, his daughter. From his cell in Belle Reve, he can’t do anything about the crazies who’ve kidnapped her. Amanda Waller has made it clear that begging will do him no good. He’s in prison and in Belle Reve there is no rehabilitation.

Batman describes Belle Reve Penitentiary perfectly; Amanda Waller’s twisted version of Arkham. There is some really deep layer of Suicide Squad that we all sort of go with that’s actually extraordinarily creepy. The idea that the government would pick and choose from the worst of the worst assigning them to carry out the worst of the worst duties imaginable is the kind of fiction that you can’t look away from because it’s just plausible enough to keep career criminals up late at night. If you mess up bad enough, Waller just might draft you onto her Suicide Squad. And that’s the best you can actually hope for at that point.

Despite all that, and despite the fact that this is one of the most advanced prisons ever created, the “breaking” in this story isn’t quite the direction you’d expect. Deadshot doesn’t bother trying to break out. Instead, under cover of night, a figure with a familiar cowled silhouette is gliding onto the grounds. Guided by the trusty voice of his own personal Jiminy Cricket in the form of Alfred, Batman has made it his business to get Deadshot out. When Deadshot asks why, Batman simply replies, “You know why.”

A scene from “somewhere in the desert” makes it clear that Zoe Lawton’s predicament is just as serious as we’ve been led to believe. Maybe even more so as she’s not simply being groomed or brainwashed into Kobra’s ranks. Instead, her body will become the vessel for Kobra’s Lazarus-pit-revived former leader. Presumably, she will lose her mind in the process as well. She’s not very enthused by the prospect.

Meanwhile, Batman makes his way through the guards and various inmates, former and current members of Task Force X included, all the while casually discussing the price of tea in China with Alfred. Alfred seems a bit more concerned with the idea of Amanda Waller catching Bruce, or at the very least realizing who broke through her defenses after it’s all said and done. But Bruce ultimately reminds Alfred and Lawton that he and Waller were never on the same side to begin with. The fragile peace they’ve agreed to always destined to break up.

As the two make the final maneuver for their escape back on the roof, Katana stops them. She briefly halts their progress but she knows exactly why Deadshot needs to get free and she figures she owes him one since she cut off his hand. She lets them pass, telling Waller when pressed that she didn’t see who helped free Lawton.

Batman makes it clear that once they free his daughter Deadshot will return to prison willingly. Deadshot hastily agrees to the terms. But then, who wouldn’t in that scenario?

In the aftermath, Waller predictably assembles Task Force X. But there’s a twist. Batman is now a priority target for her and her team. And because he already beat most of her squad members, she’ll need to throw a wrench he won’t see coming. Captain Cold is more than willing to help his Rogues Teammate Captain Boomerang, along with Harley Quinn and Killer Croc, get one over on the Dark Knight.

Analysis: This little caper issue was such a pleasant surprise from a storyline that looks like a rerun from the outside. But once inside the walls of Rob Williams’ view of Belle Reve, with Amanda Waller playing the role of the evil warden who deserves to have the Great Escape happen right under her nose, you can’t help but have a great time. It just plays like the good comics I’ve always loved and especially seem to remember from a time gone by. Particularly the amount of exposition between Batman and Alfred, which would in many instances feel unwieldy and unnecessarily weighted, make this issue glisten with Batman know-it-all-deliciousness. There’s no spelled-out PUNCH! effects when he’s laying out guards, but you can almost see where they would fit the panels. It’s also especially satisfying to see this version of Amanda Waller frustrated at every turn. This woman who toys with the lives of others, moving them around like pieces on a chessboard, becoming so visually flustered is a great touch.

While some of the plot devices aren’t necessarily totally original, they’ve got enough tweak to make me interested in the follow-up to see what’s happening with Floyd’s daughter and the Kobra connection. The fact that Batman seems to owe Deadshot from way back, which seems to be fueling his mission to bring him out of prison, is an interesting sidebar as well. It’s hinted that whatever events transpired may have been laid out in a back issue of Trinity. And even the “Editor’s Note” to check that issue lends to the slightly nostalgic feel. It seems like those helpful little hints turn up less and less in comics these days that sometimes take themselves just a touch too seriously.

Though the art wasn’t stunning from panel to panel, there were just enough sweet action sequences and some splashy “superhero landings” and the like that, combined with the snappy dialogue, the whole thing keeps it moving from the first look at Lawton’s cell to the final reveal of the new team member for Task Force X.

Final Thoughts:  I tried to convey as much fun as I had reading this issue in the review because it really was just that: good solid fun. As I mentioned it’s not like we’re going into uncharted territory, I’ve certainly seen some of these same devices used in other material. But it didn’t matter because it was fun running play-by-play with Bruce and Alfred from one end of the prison to the other. Getting licks in on pretty much the whole Squad just made it all the more enjoyable. Very much interested to see how this plays out. And if they can just jazz up the rescue mission a touch this could be a memorable little jaunt of a team-up for the Dark Knight and the Dealing Sniper.