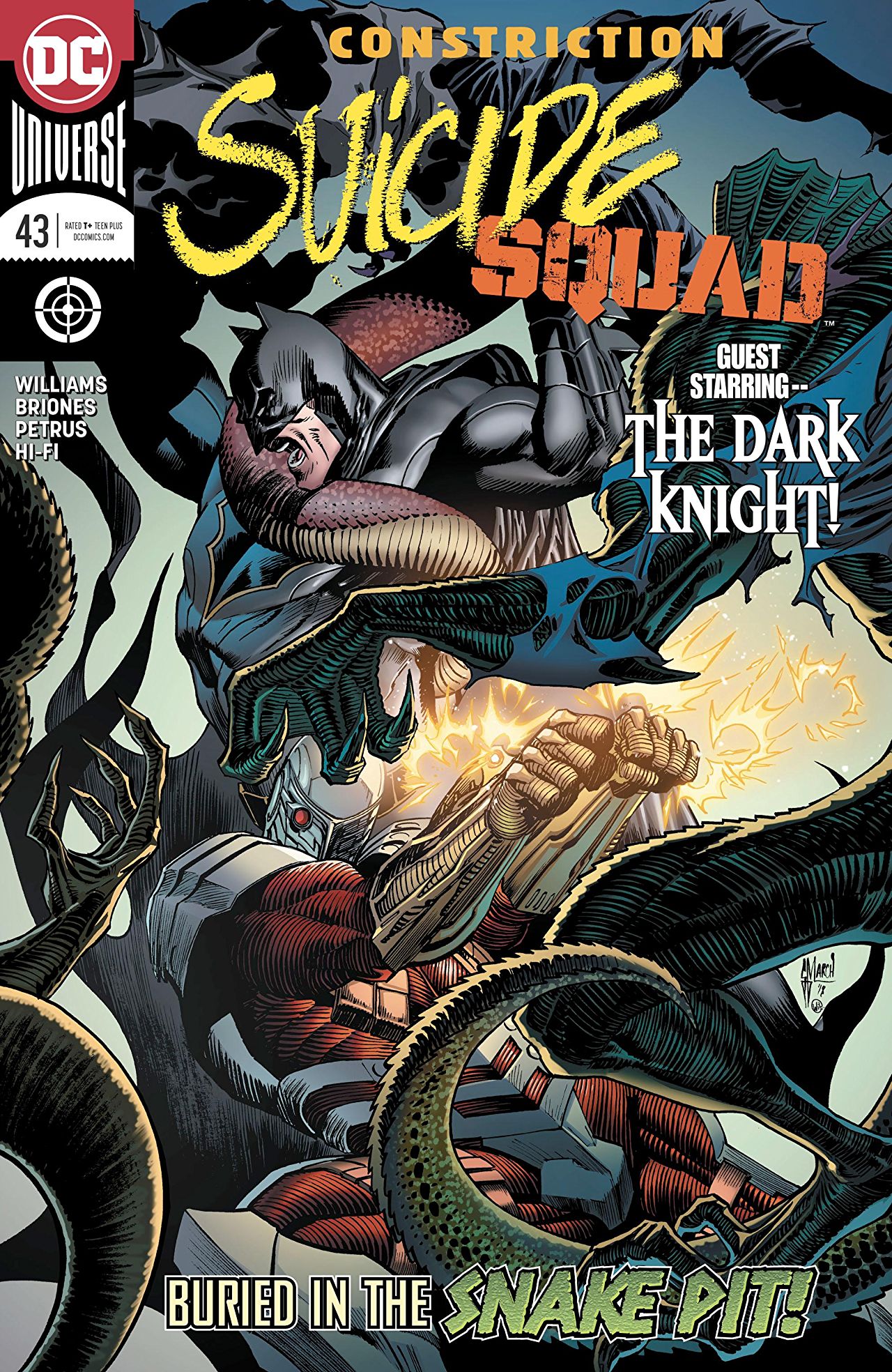 Overview: With Kobra agents in front of them and the rest of the Suicide Squad closing the gap from behind, Deadshot starts to wonder if Batman truly means to help him at all.

Summary (spoilers ahead): Damn, they’re in a tight spot! Deadshot and Batman are effectively pinned down by a platoon of Kobra agents and automatic weapons fire. Looking in front of them is a gigantic snake mutant. By Batman’s own calculations, whatever the drug is that the Kobra agents are taking, this one must have taken the mother lode. Having already pumped many cartridges of rounds into the truck, the Kobra agents are closing the gap. Deadshot, of course, is not very amused. Making quick work of the group of agents he makes a path for Batman.

However, Batman is quick to remind Deadshot that he was only brought on this mission under the condition that there would be no fatalities to the Kobra agents. If necessary, Bruce reminds Lawton that he just might beat these conditions into his head. But Deadshot is, if nothing else, a deadly accurate shot, and he hasn’t forgotten his word to Batman, even if he still doesn’t fully understand how it is that Batman maintains such an archaic sensibility in the face of extreme violence and evil. After all, Deadshot muses, quoting Sean Connery from The Untouchables, “You don’t bring a knife to a gun fight.”

Determined to prove his point, we get a page and a half of silence as Batman disables the snake mutant. “I can see why the Justice League keeps you around,” is all Lawton is able to muster. It’s quite a display and it does make an interesting point about the usefulness or necessity of firearms. But that very same point becomes the focus of the issue here. One of the disabled Kobra agents mumbles to Floyd, “what we’re doing to your daughter…you have no idea what’s coming,” and Deadshot is no longer able to contain himself. He shoots the Kobra goon point blank in the head. As Batman’s face falls in dismay, Floyd adds his own comments to the discussion, “Sorry…Nah, actually, I ain’t sorry.” And with that, the fight we’ve been waiting for three issues to see commences.

Batman and Deadshot square off. Batman, raving mad, screams that Floyd swore to him that there would be no fatalities. Deadshot retorts that the Kobra agents were brainwashed scumbags doing God-knows-what to his daughter and that the world is better off without them. Going deeper still, Deadshot claims that if Batman wasn’t so scared, he would eliminate all the criminals in Gotham and rule the city. The only thing that keeps him from doing so is that he is a coward. The mask allows him to continue to hide in fear. Lawton digs down deeper, trying to get Batman to agree to go “masks off,” and continuing with the logic that he knows Batman enjoys the brutality, enjoys the violence and bloodletting but lacks the constitution to actually carry out the final deed and put criminals down. He asks for Batman to be honest with him for once and fight head to head with their masks off.

Batman replies knowingly, that Deadshot doesn’t know the first thing about him but that if he sticks around, Batman will teach him.

The two men go deep and dark into a fight with clearly personal overtones. But as Deadshot appears to gain the upper hand, his emotions also begin to gain the upper hand over him. At the last moment, Batman uses Lawton’s energy and ferocity against him, knocking Deadshot out of the fight without permanently damaging him. Deadshot claims that in all of this, he is just a bad guy, destined to turn on Batman and fight only for personal gain. Batman counters him again, saying that above all else, Deadshot is a father first. Being a father means he isn’t allowed to be a bad guy anymore. He has to put someone else before him in everything he does.

As the two men contemplate the violent means they use to achieve very different ends, the discussion is cut short. Over the horizon, a helicopter appears bringing Harley, Captain Cold, and Captain Boomerang to bear on the escapees. There’s a number of ridiculous moments in which Harley, piloting the chopper, makes some logistical decisions based around the fact that she confuses a submarine with a helicopter. It’s nonsensical but it’s a nice departure from the very serious tenor of the rest of the issue. Ultimately, the chase takes the entire crew to the edge of the hulking Hoover-esque dam and it is clear that something climax-y is about to happen.

Meanwhile, nearby Zoe Lawton is undergoing the final preparations of the Kobra ceremony which will change her into a snake mutant as well as allow the leader of Kobra to inhabit her body. Kobra soldier Keenum still wants the ceremony to be done to him so that he can become the embodiment of Kobra’s power, and Zoe simply wants to go home. As the ceremony begins, Zoe is introduced to the waiting Kobra crowd as Recoil, The Serpent’s Fang and the leader of Kobra. Zoe simply whimpers, “Daddy, please…help me!”

Back at the dam, what’s left of Task Force X is still trying to apprehend Batman and Deadshot, but Harley Quinn’s piloting skills leave something to be desired. Deadshot can’t quite decide if Batman truly means to keep him alive, but everything is taken out of their hands as Harley crashes the helicopter and Batman and Deadshot are forced to jump off the Dam to into the lake below… bringing the issue to an end.

Analysis: There’s an unfortunate filler quality to this issue that the story arc had thus far done a great job of avoiding. But all the way down to actually showing the origin of Batman as Deadshot thinks it might have gone in his head, the forward progress of the story grinds to a halt here, even if the action in the issue itself is actually fairly breakneck. There is a sort of inevitability to the fight between Deadshot and Batman that is at once necessary to showcase and at the same time entirely redundant. We know that Deadshot and Batman are diametrically opposing forces that have been pushed together to achieve a common goal, so actually stopping to have them beat each other up here just feels like they needed to make this story arc one issue longer and having this fight helped the creative team and editorial staff make that happen. It’s too bad though because they could just as easily pay a little extra attention to whats going on with Kobra and the nature of this ceremony that seeks to resurrect the leader of the monstrous cult and maybe flesh out why Zoe Lawton is such a good candidate other than the fact that fundamentally altering or destroying Deadshot’s daughter might be a desirable outcome for them. There’s also a decent reporte going between the members of Task Force X that are on Batman and Deadshot’s trail. Giving them a little more screen time might have helped to sell this as an issue of Suicide Squad and not an issue of the Batman/Deadshot miniseries. It will be interesting when this gets collected to see if it, in fact, get’s marketed that way or not.

One thing to note throughout this arc is that there has been a different artist for each issue, and art chores are actually handled by two different artists on this issue in particular. Knowing in advance that Suicide Squad would have the absolute marquee guest star situation going with Batman for the entire story arc, I always wonder how these type of editorial decisions get made. Overall this has been a good story, despite the fact that this issue has felt a bit superfluous. Having a real ace artist to hold things down in this situation helps to move the story along and make the issue feel much more enjoyable. Having neither a star artist nor, in fact, even a consistent artist makes me feel as a reader that there is not much interest in this story by the editorial team and that if they cared more, they would make things like that a priority.

Final Thoughts: Deadshot and Batman are two of DC’s most high profile characters and this story has been up until now highly enjoyable based solely on the writing. As the story slowed this issue, it brings attention to the fact that a bit more focus on the art might elevate this arc to greatness. But that gives us something to look forward to seeing improved, along with the fate of Zoe Lawton!