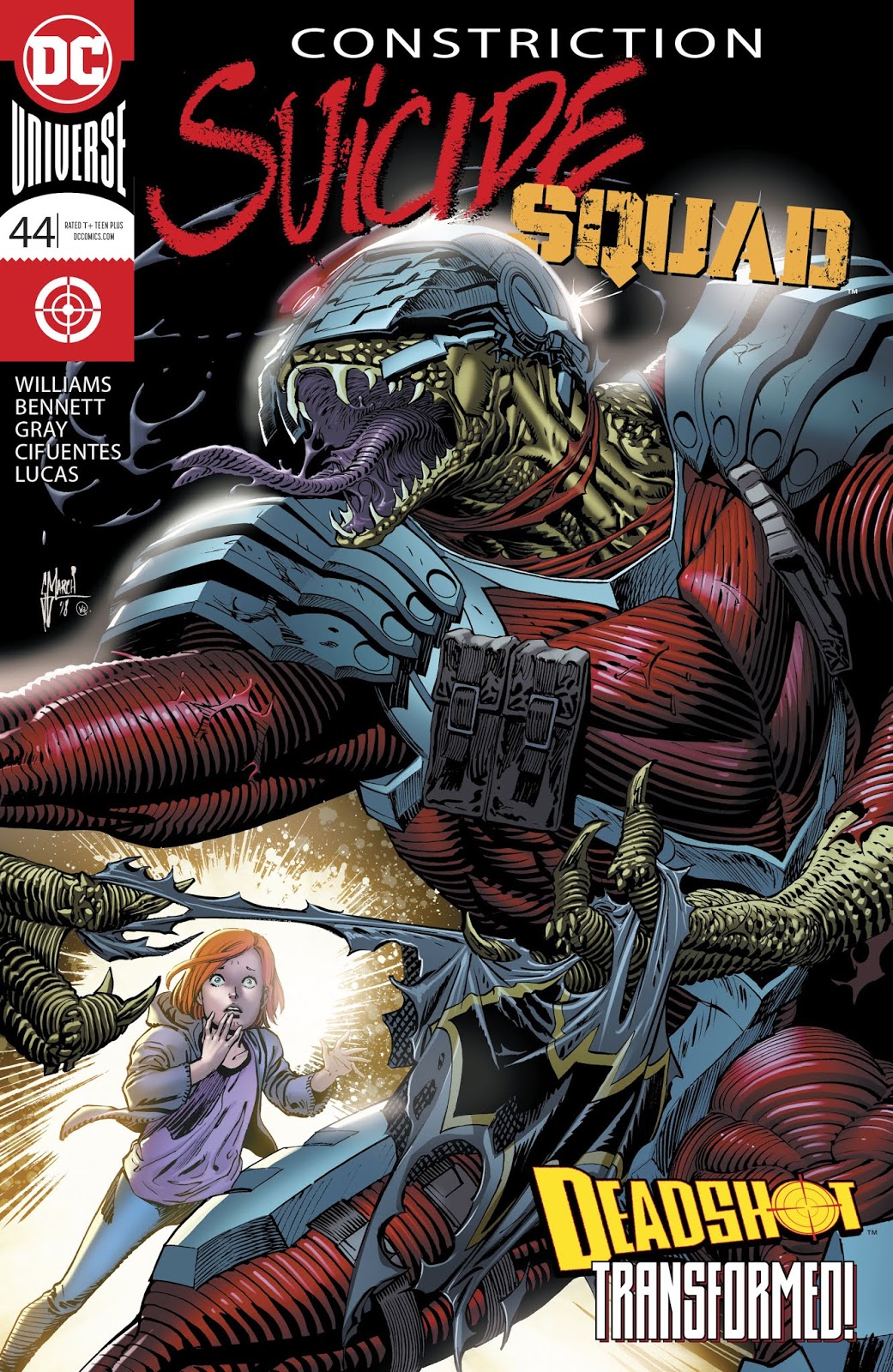 Overview: There’s only one thing that could force Deadshot to make the ultimate sacrifice. But will that be enough to save his daughter from the fiendish mind of the Supreme Leader of Kobra?

Summary: Credit where it’s due, each issue of this story arc has left Batman and Deadshot hanging from a more precarious cliff than the last. This issue literally picks up with our two “heroes” falling from a cliff overhanging the outlet of a dam with Harley Quinn, Captain Boomerang and the crumpled remains of a helicopter close behind them. And while Deadshot considers what, if anything, he has to live for, Batman is quick to act. Pushing Deadshot clear of the wreckage into the body of water below isn’t enough as the weight of his body armor pulls him toward death. Intervening yet again, Batman dives after Lawton, strips most of his armor away and drags him to shore. In a very “shark repellant” moment, the Bat-computer has run every available scenario and produced the resulting outcome that Kobra must be hiding in a nearby cave system.

Meanwhile, Harley and Boomerang are puzzled by the seemingly spontaneous freeze-over that has caught their chopper mid-fall down the dam’s outlet stream. They trade theories such as Harley freezing the water “with her minds,” and Digger wondering if perhaps he has been chosen by God to survive. Captain Cold can only look on in pitiful wonderment as his comrades give new meaning to the term “frozen in mid-air.” Cold is able to take this opportunity to report back to Task Force X HQ and call reinforcements to the site. Hopefully, they will arrive in time…

Inside the cave system, the Kobra cult leaders are completing the last incantations of the ritual that will bring back the soul of their leader to be reborn in Zoe Lawton’s body. As Zoe struggles, she appears to breathe in the mists of Jeffrey Burr’s soul and her body prepares to become Rekoil, the new host of Kobra’s leadership for a modern era. As the final moments of the ritual are about to unfold Deadshot bursts forward opening fire on the Kobra High Priests. Zoe is able to exclaim, “Dad!” assuring everyone that her will is still her own. Just then, Digger and Harley appear as well. But even though they are supposed to be hunting Deadshot (and ostensibly Batman) for their parts in the Belle Reve escape, Digger promises them that even though he hates Deadshot’s mustache, he and Harley hate “Snake Mutant Terrorist Nutters that want to Kill Me,” more. So, ya know, first thing’s first, they put aside their promise to Amanda Waller and work as a team. Harley throws in a whimsical “Suicide Squad Assemble!” borrowing a familiar line from another established team of heroes.

However, the Kobra Priests seem happier now than ever before and soon it becomes clear that the rescue of Zoe Lawton was part of their plan from the start. With an intriguing twist, they reveal that Deadshot himself was always the main target of the ritual. Kidnapping Zoe was just the sure-fire method to get Floyd Lawton on site. As Zoe, Batman and the rest of the Suicide Squad watch, Deadshot transforms before their eyes. As he begins to develop scales and even sheds some limbs, one of his wrist blasters falls away and is replaced by a more reptilian appendage.

However with the Squad, very little is truly shocking. And if Zoe’s safety had been the main objective while trying to stop the reincarnation ritual, Harley and Boomerang seem to object far less to the idea of Deadshot getting hurt in that process than his daughter. With her trademark mallet, Harley swings for the fences. Deadshot appears more and more under the control of Kobra’s leader, and he easily disarms Harley with his disgusting new prehensile tongue. Boomerang is quick to note that growing up in the Australian Outback, his childhood was rife with attacks by humanoid snake mutants with just such an appendage. Harley is just grossed out.

As Deadshot closes in on his former teammates, Zoe shouts from behind, encouraging her Dad to fight with the strength of will she has always known him to possess. Batman swoops in with the same encouragement. He appeals not to the hitman but to the father only trying to provide the best life he can to his daughter. Hoping that underneath both the current mutation and the hardened criminal exterior that has been Deadshot’s trademark for years he can reach a layer that has yet to succumb to the reptilian control. But unfortunately, the Deadshot that responds to those appeals is the one controlled by Jeffrey Franklin Burr, the Kobra Supreme Leader who’s essence now resides in Deadshot’s body. He fires at Batman, clipping him squarely in the head. Pausing to congratulate his High Priests, the newly reborn Kobra Lord immediately begins to inquire after the readiness of other factions. So drunk on the victory of claiming not only a new body but that of Kobra’s sworn enemy Deadshot, the Kobra leader almost forgets that one last enemy stands in his way.

Zoe Lawton, holding the wrist blaster that fell from the still-mutating body of her father, blasts away at the priests and the Kobra leader himself. As life slips away from Deadshot’s body, so does the soul of Jeffrey Franklin Burr, cursing the short-lived return to corporeal form as it’s snatched away from him. Zoe sobs, realizing that with a single act she has killed her own father left her in the position to fulfill a horrifying destiny; to become the next Deadshot. Batman puts a hand on her shoulder. “No you won’t,” he says. Kevlar on the cowl saved him from what should have been a deadly shot, and his prowess when it comes to field medical procedures comes in handy reviving Deadshot. It also helps that Zoe’s shot missed his heart. “I hate guns,” he mutters.

Meanwhile, the sniveling Kobra lackey who has been observed throughout the story finally gets his chance to offer his body as a sacrifice, and apparently, Jeffrey Franklin Burr will live to see another day as the Supreme Kobra Leader.

Outside the caves, Captain Cold finishes a beer and waits to be taken back to Belle Reve, content to have saved his friends even if they were too dim to notice. Batman captures the twice-newly corporeal Rekoil and leaves him for pickup by Amanda Waller and her crew. But when Waller emerges from her command chopper, her main line of inquiry is after Batman. The Squad, however, isn’t squealing this time around. And when it comes time for Zoe Lawton to give her version of the story, she can only smile telling Waller that it was all down to her Dad. Deadshot, in this case, was the hero.

Analysis: It’s hard not to enjoy this issue as everything really wraps up rather nicely at the end of “Constriction.” Certainly, some things are more convenient than should really be plausible, but after all, we are enjoying comics here. What is truly likable in this issue is that writer Rob Williams, who may have been guilty of the occasional stalling segment, doesn’t mince words at all as the story flows as if from the outlet of the dam where we pick up the beginning of the issue. There are some particularly memorable lines from both Harley and Digger throughout and the classic duality of comic violence is nicely provided for. Captain Boomerang in particular, often the butt of many jokes, takes full advantage of the opportunity to provide his own comic narration and we’re all the better for it. Joe Bennet’s art is above average and by that I mean excellent. He carries the story and provides ample action without taking us out or away from what’s really going on. And when the story beat moments really matter the heroes and villains (admittedly it’s hard to tell who’s who) really wear their intentions. When Zoe believes she’s just killed her own father, we can it in the lines on her face. That she believes she is destined to follow in his footsteps of her father is just as vivid. The weight of all this macabre fate is imprinted on the reader’s mind and it’s not until Batman pulls her out of this bloody destiny that we believe she is truly rescued.

All of this allows for a bit of a cushion so we can believe that nobody was hurt in the chopper crash, and, among other things, Batman survived a direct headshot from Deadshot. After all, we’re here to enjoy comics and holding everyone to physics and laws of nature isn’t the main objective. Truly bombastic comic story arcs tend to leave the occasional loose end which is fine as long as we get a few nice splash pages in trade.

At the end of it all, we’re left with an interesting lead into a new story with the leader of Kobra now among the living. Some characters that are often relegated to McGuffin status (like Zoe Lawton) got to explore their motivations a bit more fully and Batman played a part without completely hijacking the outcome of the story.

Final Thoughts: While the story lagged at moments in earlier issues, this final chapter was a fun, fast-paced read with a quality of art that rose above some of the previous installments. We were given a chance to hear from characters like Boomerang and Zoe Lawton who are almost always relegated to the sidelines. More importantly, while Batman swings in to assist in crucial moments, it isn’t a Batman story at its core. Keeping the focus squarely on the Squad is a challenge with the Dark Knight on board and Rob Williams showed he could manage a cast of characters without losing the main premise. While the story had several artists, Joe Bennet’s pencils to finish the arc put a noticeable fine touch on things and carried the whole ensemble across the finish line. Constriction was a good run and the finale put its best face forward.