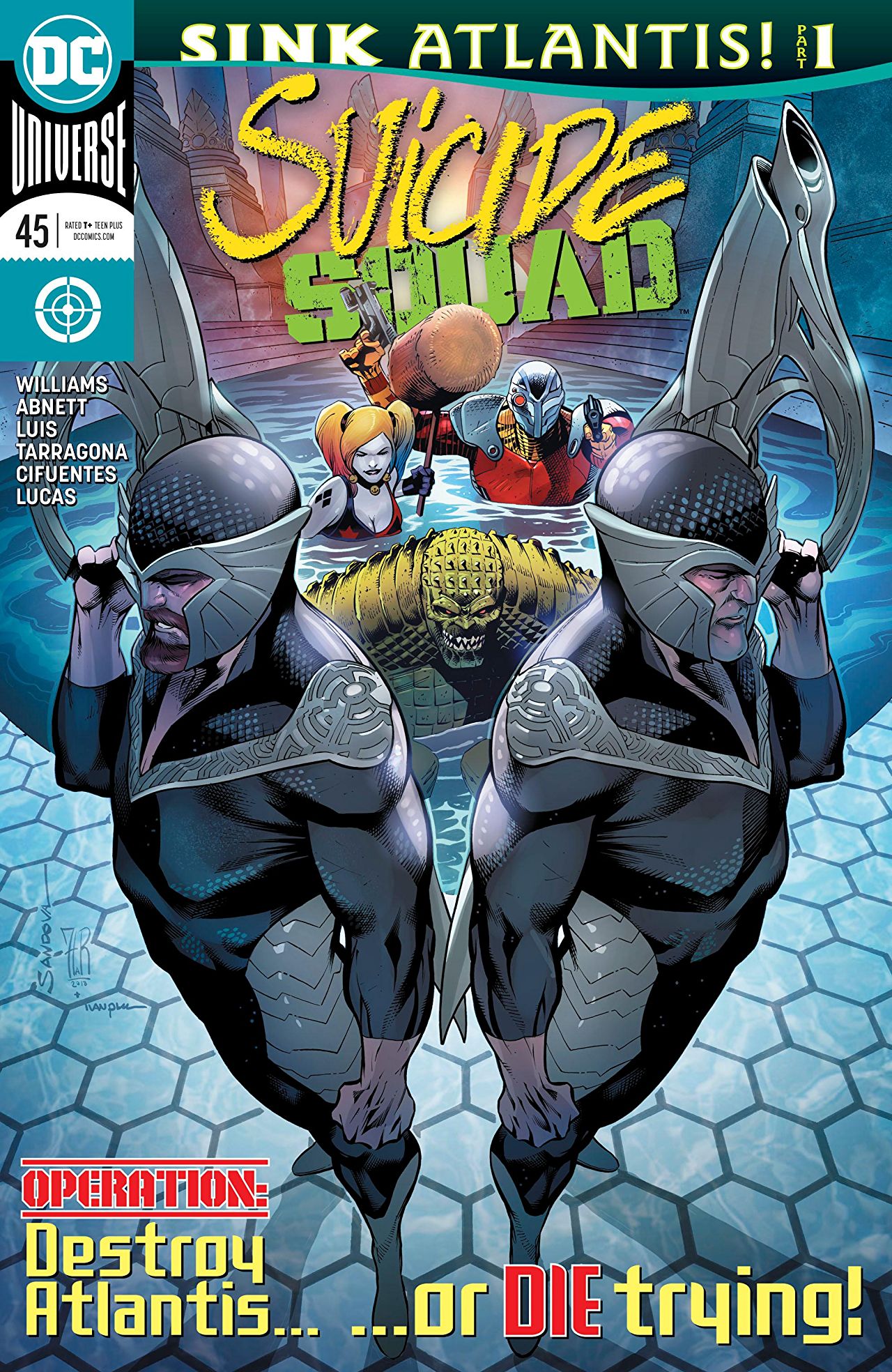 Overview: There is something to be said about the versatility of Suicide Squad as a series. As a team, the versatility is built in. Amanda Waller wields Task Force X with a chilling level of expertise and that has always been true. But it is the way this book is able to pivot away from the last storyline, “Constriction,” and move effortlessly into an incursion against Atlantis that is really something to behold. Then there is the versatility that leaves us on the edge of our seats as the lives of characters from across the DC Universe hang in the balance. Meanwhile…. Harley Quinn picks her nose.

Mixing deadly serious with diabolically zany isn’t always an easy job, but it’s the very definition of versatility. While Rob Williams continues to helm the book, Dan Abnett joins him this arc for a crossover with Aquaman called “Sink Atlantis.” And no matter who loses the fight between Task Force X and the Atlanteans, we’re guaranteed to win.

Synopsis: We open with a serene view of Americana… and even voice-over from Harley can’t take away from the quintessentially perfect Endless Summer. It’s a perfect day at the beach. And really who wouldn’t want to spend their summer- especially dog days like we’ve had lately- at a beach like this? There’s just one problem. As a particularly primo wave prepares to crest, a form begins to take shape just beneath the foam. The wall of water continues to rise filling beach bums and babes alike with panic and dread. The view pulls back. Atlantis, long the realm of water-breathing humanoids and other deep-sea life forms, appears to be rising above the waves.

A troubled-looking Mera gazes out from a palatial balcony at all she commands. She waits for her coronation ceremony and all of the dignities and responsibilities it will bestow upon her. But there is a problem. Now that Atlantis has risen above sea level, her gaze falls upon some portions of land under the jurisdiction of the United States. “Keep your friends close and your enemies closer,” she muses as advisors and caretakers scurry about. One advisor looks at her quizzically, wondering which land-dweller originally uttered the quote: Machiavelli? Sun-Tzu? Mera smiles, it’s a quote from Arthur’s favorite movie The Godfather.

Below, Aquaman looks just as troubled. No longer the king of this domain, it takes every ounce of control he has to stay clear of the ceremony and leave Mera to enjoy her day. And anyway, the rising of Atlantis seems to have been his fault (for more on that, check out Dark Nights: Metal.) On this day of all days as Mera waits to accept the crown. Arthur has been around the surface dwellers for too long, however. He knows that Atlantis reaching the surface will cause the leaders of this world to do more than raise an eyebrow.

Meanwhile, in a briefing room at the White House, a veritable whos-who of Washington’s finest is raising eyebrows, voices, tempers and blood pressure. In the back of the room, looking much quieter than she likely feels under her pantsuit (She’s not actually wearing a pantsuit, but you get the reference, right?) Amanda Waller’s eyes roll nearly out of their sockets. Exactly this type of bickering and nonsense is the reason that she formed Task Force X in the first place; So that when partisan political posturing ends, the actual work can get done. Whether or not the American people, or even, say the President of the United States know they need Amanda Waller’s expertise in this area is more or less beside the point. As the more hawkish members of the committee see one of the President’s closer advisors announces in no uncertain terms that the United States will make no move against Atlantis. Waller is already communicating the details of the engagement back to Belle Reve penitentiary in order to prep the necessary team members. Some of whom we already know, and some, including a “replacement for Enchantress” that may offer more mystery than clarity.

When electing to engage in espionage against a country that boasts nearly all of its territory underwater, it is important to have access to a submarine. And indeed, Amanda Waller wastes no time in filling hers with a lethal cadre of fighting criminals. Harley Quinn, who is quick to make it known that she “hates flying” is among them, Deadshot is the temporary team leader. Captain Boomerang, a liability in clandestine operations that require a degree of finesse is not among the crew. Neither is Katana. Deadshot and Harley are both still not in 100% fighting shape having just faced off against Kobra, Batman and other assorted strangeness in the last story arc. So Amanda Waller announces the arrival of Lord Satanis and The Master Jailer. Lastly, Killer Croc joins the team, which appears to be a major tactical error on Waller’s part, as Croc’s current disposition could stand to be improved by about 100,000 milligrams of Zoloft.

“Nothing matters,” he sighs wistfully.

“Inspirational,” Waller quips. And this time she very nearly loses both eyes in such a heavy rolling movement. With that, the Squad is sent into action.

There’s a plan, with Waller there is always a plan, and in this case, it’s actually quite simple. Atlantis is above sea level. They need to send it back below. Waller provides Lord Satanis with a magical device that has the power to do exactly that. All they need to do is get the device down to a heavily guarded, nearly inaccessible section of the Atlantean Kingdom called the Silent School. Once there, everything else should just fall into place. There’s no room for error, but if each team member does their job, they should be able to avoid collateral damage as well. For Deadshot in particular, this is crucial. He will kill anyone for money, but he won’t kill anyone without cause.

Behind closed doors, Waller is chastised by one of the same Generals that tried so hard to give her a headache earlier. He seems to have some dirt on her and knows about what became of Rick Flagg. So it seems that Waller’s interest in this mission isn’t strictly national security based. She’s also trying to save her own skin.

While the Squad drops to the depths of the sea, a great deal of hijinks ensues. Costumed bad guys taking themselves too seriously are too much for Harley Quinn to ignore, and she gets a great deal of satisfaction making fun of, in particular, the newer members of Task Force X. But when the team, traveling in the belly of a dead whale, reaches their destination, they are once again all business and displaying the professionalism that makes them so formidable.

Meeting up with their contact in the Silent School, the Task Force prepares to drop their magical payload and make for the surface. Before they can do that, however, Deadshot finds that the Silent School is harboring a number of refugees from other areas of Atlantis. They do not believe that Mera’s rule is legitimate and they want Atlantis put back where it belongs as soon as possible. Unfortunately, in an era of fake news, they aren’t all in possession of the facts and have yet to realize that Atlantis’ current positional problem has nothing to do with Mera’s crown.

Among the refugees, there are quite a few children, and if they are to carry out the plan as presented by Waller, those children will die. Deadshot is unable to carry out a plan with that high a price tag and an argument follows. In the end, it turns out to be a moot point. Taking the device from Lord Satanis, Deadshot pulls it from its housing. The telltale “radiation” warning sign makes it clear that sending the water nation back to the ocean floor was never in the plan. Task Force X has been tricked into coming here to destroy Atlantis, not to sink it.

Analysis: The creative team of Rob Williams and Dan Abnett writing along with Jose Luis on pencils do a sort of comic book alchemy here. It’s not the individual ingredients that go into Suicide Squad #45 that make it pop, but the exact proportions and measurements. There’s just enough Harley talking trash, a scoop of bad guy monologue and a pinch of heroism from Deadshot’s corner. Shake that and stir in some political intrigue and the espionage that comes into play any time Amanda Waller walks into the room. Bake in some visuals from under the sea including dead whales and a giant squid. Let it simmer and what comes out is more than the sum of its parts and it’s definitely good for seconds. Which is a good thing since the second part of this tale comes in the form of Aquaman #39 in just a week. There isn’t a ton of verbose nonsense that needs to be said about this. Suicide Squad is firing on all cylinders at the moment and it’s hard to bring any serious complaints. If you’ve been following along up to here, there is more of what has made this book hum for many moons now.

If there are any concerns, perhaps simply that is so very much how one expects superhero comics to play out that the path unfolds a bit too naturally. You may not guess exactly the specifics of the twist, but you’ll be able to almost hear the twist coming as the pages turn. Harley is maybe a little too Harley, Deadshot is maybe a little bit too Will Smith Deadshot and not the ferocious bounty hunter one might hope. But that’s how the complementary personalities have to work occasionally. In the end, the book achieves exactly what it sets out to achieve. And for the first time in my life, I’m looking forward to reading Aquaman (in one week!).

Final Thoughts: There’s a little something in this book for almost everyone. The rotating cast means each arc can have a different dramatic slant, but Rob Williams anchors the feel with a very consistent recipe. Perhaps it is Dan Abnett’s touch that gives us something exciting to look forward to as everyone’s favorite anti-heroic marauders are introduced to a higher magnitude of political intrigue and espionage. Perhaps it’s simply that every once in a while when you stop and take a very close look, you realize that some teams are simply dialed in and there’s nothing else to do. Whatever the case Suicide Squad remains a romp and it’s beyond steady. Here’s to a blender full of bad-@$$!!