Review: Adventures of the Super Sons #11 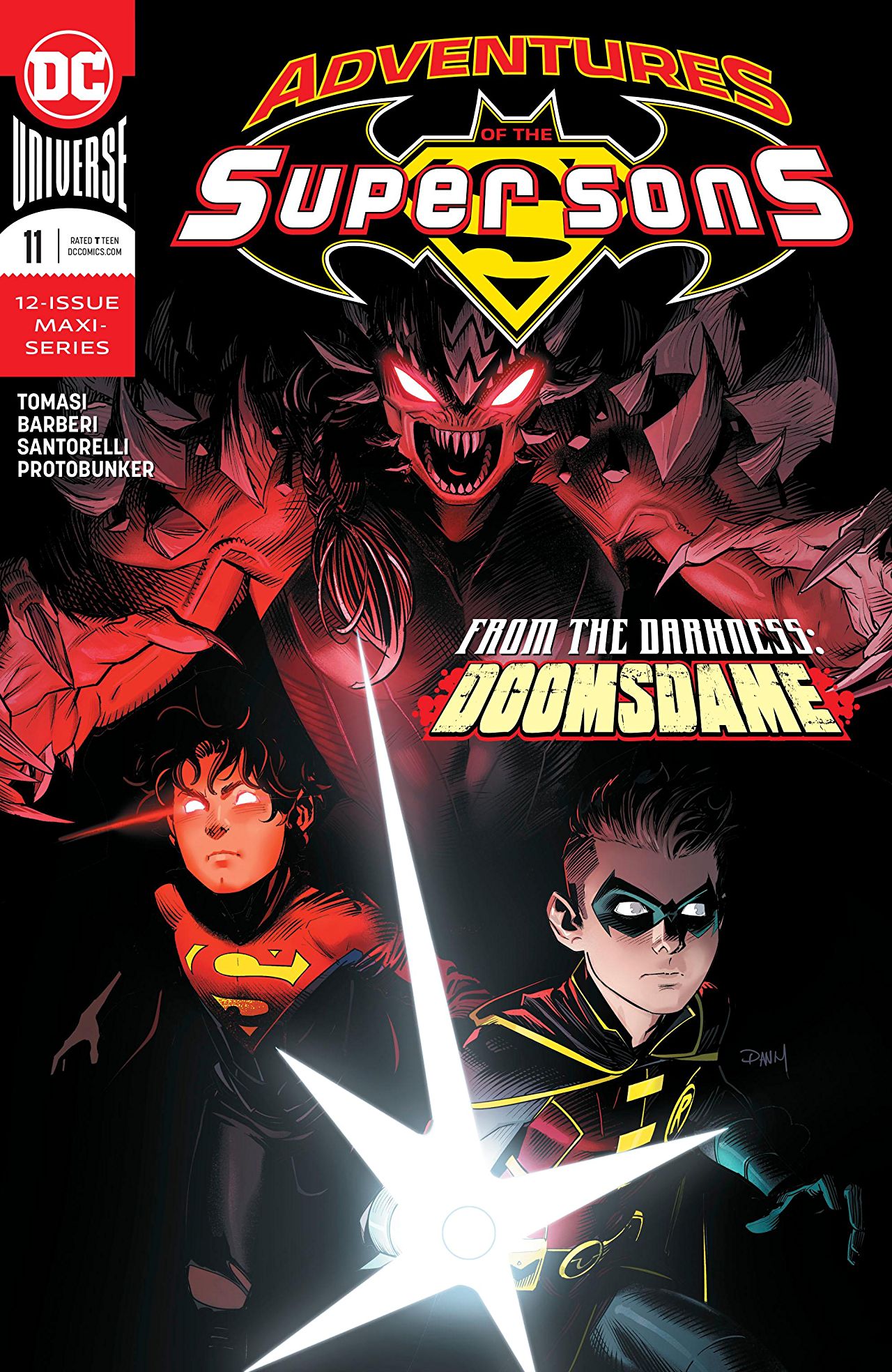 Overview: The penultimate issue of our miniseries comes around and our heroes rush towards home to save the day.

Synopsis (spoiler ahead): After reuniting with their futuristic selves, the Super Sons trade banter with Rex Luthor before trading punches. After the heroes fight off Rex Luthor’s “Injustice Army”, they turn their efforts onto the villainous leader himself. Rather than duke it out, Rex runs towards his big glowing portal in the sky to go to Earth. The Super Sons give chase, only for it to be revealed at the last minute that it was a trap and they are stuck in a white void, forced to listen to Rex monologue indefinitely.

Analysis: This issue was a bit of a challenge for me to review, not because it is good, not because it is bad, but because nothing happens. There are ten pages dedicated to just fighting. And not a singular fight where the two combatants slowly figure out the tricks and tactics of their opponent. Fights are solved in two pages max. Seven of them are just splash pages where the heroes do something action-like with Superboy narrating a single line. The issue itself advertises itself with the Super Sons fighting Doomsdame, and she barely shows up for more than three panels in the entire issue.

This isn’t to say you can’t have an engaging story that’s just set in the middle of a battlefield, but you do need a narrative to exist. You need progress across each page. Instead of just showing a bunch of random action, have a set of difficulties in place that the Super Sons need to overcome first. Using the already existing structure of the comic, and the cover-page, have this rag-tag team of allies the Super Sons accumulated fighting in the background and focus each page on the Super Sons trying to take down Doomsdame. Make her into a legit obstacle that they need to take down before they can fight Rex.

Perhaps, in the beginning, Doomsdame is too tough for the two to take down, and Rex taunts the heroes, but the two use information they have learned over the course of the series to overpower Doomsdame and make their way to defeat Rex. It would take the same amount of pages, and give the readers something to pay attention to as they flip through the pages.

Now, don’t take this as an exclusively negative review of the comic, I don’t think the comic we got was inherently BAD, just, unimportant. I can’t say nothing happens, because of course stuff happens in this issue. At the same time, I can’t really say anything that did happen was worth paying attention to. Typically in stories where the majority of the pages are just splash pages, you can justify it using the artwork, but even then the art is just average. Nothing stands out, nothing grabs you or keeps you wanting to stay invested.

Final Thoughts: There are many ways this could have been done better, but it could have been worse. If you’re already reading the series, no reason to stop now, but I definitely don’t recommend picking up the series based on this issue alone.