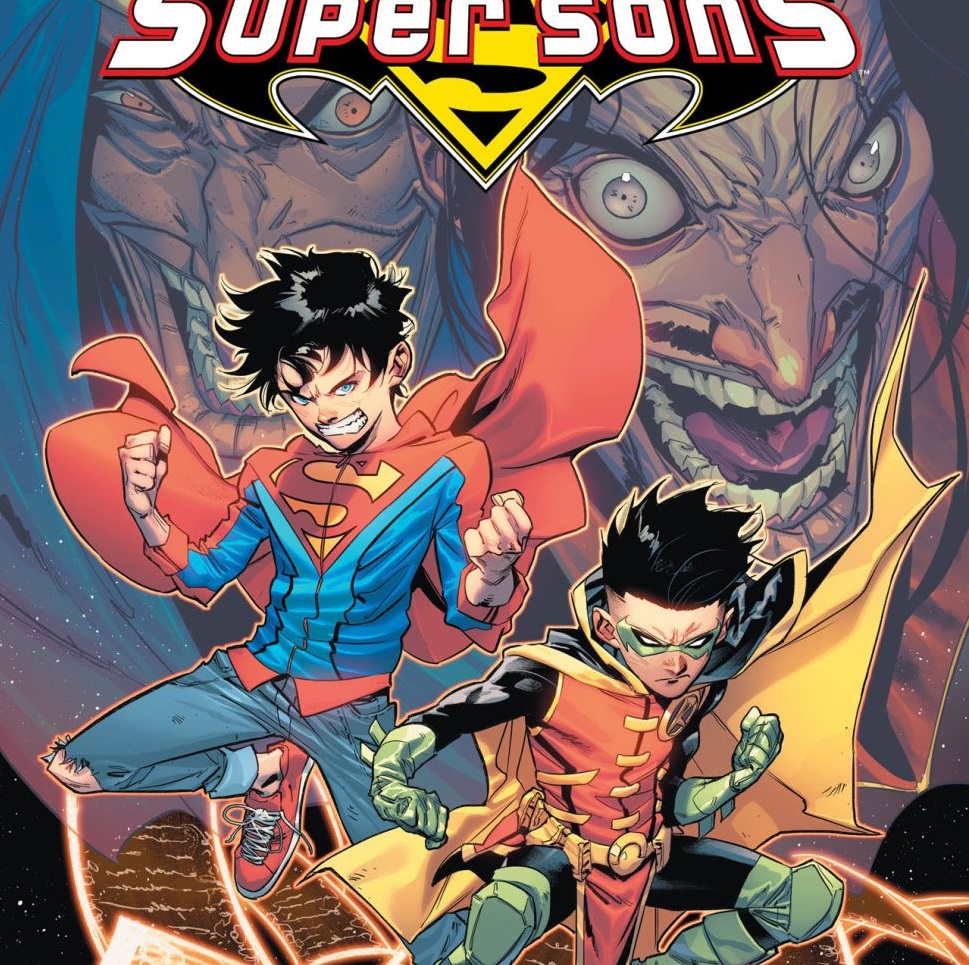 Overview: In Challenge of the Super Sons #1, Superboy and Robin team up to save a member of the Justice League prophecized to die on the parchment of the Doom Scroll.

Synopsis (spoilers ahead): In the far future, Challenge of the Super Sons #1 begins with two irritated seniors shouting back and forth at each other and gesticulate widely in front of a television screen. Their sparing match is both verbal and virtual as they smash their fingers across the buttons of a video game controller, each trying to beat the other’s character in the game.  The video game itself is one based on the two men; on the screen, Superboy and Robin battle it out as their older, real-life counterparts argue over the inaccuracies of their voices in the game and who is really winning.

Behind them, two young children creep quietly past and stop at a bookshelf, pulling off the next volume of the story that they’re reading. Despite the fact that they’re both supposed to be in bed fast as sleep, the kids open the novel and dive back into their story.

The title of the book gripped in their hands is stitched across its spine; Adventure of the Super Sons: Doom Scrolls.

In the (sort of) past, (days after the events of Adventures of the Super Sons) Damian Wayne and Jonathan Kent make their way out of the West-Reeve School Library, both in a bit of a surly mood. Despite Jonathan’s dedication and thorough work for the past two weeks to uncover a cheating scandal within the school, Damian has not already solved it, but informed the school’s headmaster of it, neatly taking care of the problem. Unfortunately, he’s also taken away Jonathan’s chance to solve the issue himself and potentially get a job on the school paper.

Their snappy comments to each other don’t stop as they both exit the school and make their way down an empty alley and exchange school uniforms are for crime-fighting costumes. Tonight, their patrolling Metropolis (the decision being made on the fact that Lois is making chili) and the lack of transportation for Robin is easily being solved by catching a ride on Superboy’s back.

The night is calm without any emergencies, so the boys fill their time by helping a nurse and her small children unload a (literal) mountain of groceries from her car. Shortly after, however, their quiet evening is disrupted by the sudden appearance of a lady clothed in a purple robe and fire glowing from the pits of her eyes. She screams about the Doom Scrolls, death on parchment, and the story from the other side as both boys stare at her in confusion.

Suddenly, the night is illuminated by a bright flash that explodes from behind her.

Later, in Metropolis, the lady robed in purple, known as Rora, pulls out a distressed scroll. As a brilliant light appears in front of her, she murmurs to herself that she has been waiting so many centuries all for this one moment, to be free from Savage and Faust.

As the light fades, Superboy and Robin emerge, dark cloaks around their shoulders. They’ve returned to the 21st century and confer over the Doom Scroll, a document given to them by Rora in order to save the person that appears on it. They only have one hour to save the victim doomed to die and can’t tell anyone about it. If the victim finds out about their prophesied death, the punishment would be the instant death of an innocent.

Robin notes that they’re going to need every minute in their hour as they look at the golden symbol of the Flash being hit by a bolt of lighting inked upon the Doom Scroll.

Later, with minutes remaining on their timer, the boys arrive in Central City, (the journey made possible for Robin by the use of a rocket envisioned by Superman and built by S.T.A.R labs) and catch sight of a red blur crossing the city.

Below them, the Scarlet Speedster flashes by along with the last remaining seconds on the boys’ timer. They know how he might die, as the scroll prophecied that lightning would strike him dead, but they can’t account for when that might happen.

The clock ticks, less than two seconds, and finally zero. Their hour is up. Thinking fast, Robin tosses Superboy his staff, which attracts a bolt of lighting that would otherwise have killed the Flash. Despite the power of the lightning strike, Superboy is able to pick himself back up without any injuries. The Flash is nowhere to be seen, unaware that the two young heroes just saved his life.

Dusting himself off, Superboy wonders if they’ll have time to regroup with Rora and figure out their next step. Staring at the doom scroll, Damian tells him to wonder no more. Inked in gold on the document are two W’s, the symbol of Wonder Woman.

Analysis: Writer Peter J. Tomasi and artist MAx Raynor delightfully bring back the fun and lighthearted story of Superboy and Robin in Challenge of the Super Sons #1, which is yet another great thing to bless the year 2021.

This story takes place right after their adventures together, bringing fans back to a time when both heroes were young middle schoolers, determined to follow in their father’s footsteps and fight crime, help the innocent, and when needed, save members of the Justice League.

Rora, the deliverer of the Doom Scrolls, gravely instructs the two heroes to save the victim prophesied to die within an hour and without informing anyone. Why this has to be isn’t necessarily made explicitly clear, although it’s safe to assume it’s a challenge set forth by either (or both) Vandal Savage and Felix Faust. Never one to back down from a challenge or potentially endanger someone’s life, Robin and Superboy are quick to agree without much concern and successfully save the Flash from dying by a bolt of lightning. The plot isn’t multi-layered or intricate, but it offers a foundation for the larger focus of the story; the friendship between Robin and Superboy.

While the story itself is clearly targeted to a younger age group, shying away from any of the darker, more mature themes that comic readers might see in the issues of Batman and Detective Comics, Tomasi writes both characters and the dynamic between them so well that I was entertained throughout the entire read. The sarcastic comments that Robin and Superboy toss back and forth to poke fun at each other were creatively written, maintaining a constant sense of humor and fun throughout the issue. The two boys feel less like best friends and more like brothers, their interactions reflective of siblings. (I was definitely reminded of my own exchanges with my brother and sisters). And as an added note, I greatly enjoyed the art done by Max Raynor and colors by Luis Guerrero, whose talents bring the writing to life with creative scenes and amusing character expressions.

Challenge of the Super Sons #1

Perfect for young readers but still entertaining for adults, Challenge of the Super Sons kicks off with snappy comments and fun moments, giving fans another story to add to their collection. I'm happy to once again be reading a story centering around Robin and Superboy and I'm ready to sit down, buckle up, and enjoy the ride!