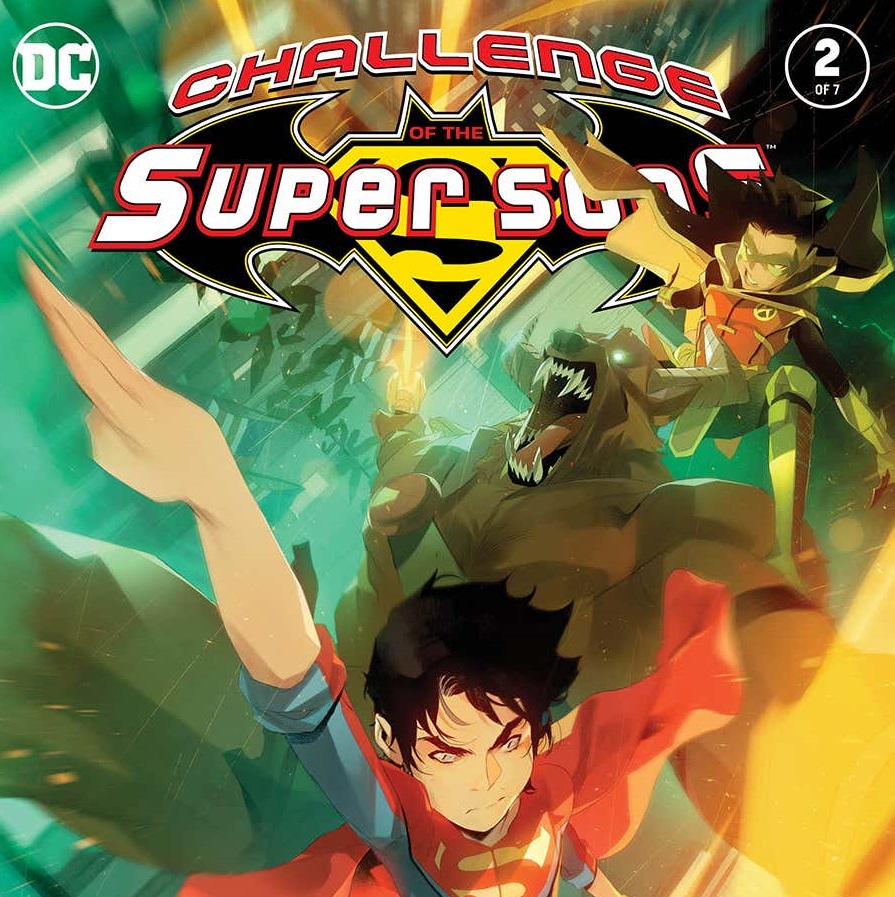 Overview: In Challenge of the Super Sons #2, Superboy and Robin work together to complete the task set before them by the Doom Scroll and the villains behind their predicament are revealed.

Synopsis (spoilers ahead): In Washington D.C., Superboy looks incredulously at the white rope Robin shows him, asking if that’s really going to be able to help them save Wonder Woman. The Doom Scroll has revealed that something sword-related is coming in the next few minutes to kill the Amazonian warrior, who is currently stopping a bus from crashing into traffic.

The rope, called the Bind of Veils, was created by the gods who reverse-engineered the threads that make up the Lasso of Truth. Robin borrowed (stole) it from Batman’s private weapon collection designed to take down the Justice League, a revelation that is a surprise to the half-Kryptonian.

Robin easily brushes off his friend’s shocked exclamation and explains that the rope, once cast upon Wonder Woman, will create an illusion over the real world that will only affect her. With Wonder Woman under the Bind’s spell, Superboy will have enough time to scout around nearby and discover the threat without Wonder Woman spotting them.

The boys put their plan into action swiftly, and not a moment too soon. As Wonder Woman helps the occupants of the bus climb out, Robin secures her with the Bind of Veils just as a creature that greatly resembles a minotaur explodes from a magical portal. The monster wastes no time attacking Superboy, declaring as it does that it has climbed from the bowels of the earth with a sword forged by the god of war himself and tasked by Felix Faust to bring him the head of an Amazon.

Superboy doesn’t take the hits sitting down, however, and Robin is quick to join the fight and help his friend out. Despite the effect that magic has on him, Superboy finishes the fight with a powerful punch, knocking the creature out.

Several minutes later, Wonder Woman stands over the unconscious form of the creature restrained with her lasso, gazing in curiosity. It’s obvious to her that someone was clearly looking out for her.

On the rooftop of one of the nearby buildings, the boys leave; there isn’t any message on the Doom Scroll yet, so they decided to utilize their time to go back and check in with Rora. They need to make sure the situation with Savage and Faust has been handled.

“Good idea,” Superboy agrees. “It’s been over five hundred years since we met her… there’s tons to catch up on.”

Flashing back to the past and then several years through it to the year 1520 in England, the man known as Vandal Savage is rudely awakened by a stone being thrown at him. The squire of Felix Faust, Rora (short for Aurora), announces that her master wants to have a word with him.

One year later, Savage bemoans his boredom which is a price, Felix proclaims, that Savage must pay for his immortality. The real tragedy, Felix continues to state, is that Savage’s never-ending life is wasted on the uncurious; the sorcerer has been searching endlessly around the world and through the shadow’d realms for the secret to the eternal existence that Savage possesses.

Boredom is not what Savage struggles with, however. It is impatience and the slow days that feel like an eternity to find out how his story ends. Suddenly, a bright flash of light illuminates the room the men are residing in and as they look out the second-story window to the streets of England, the crumbled forms of Robin and Superboy lay below them.

The boys groggily pick themselves up, surprised to find themselves not at all in Metropolis where they had been just a minute before, helping a woman unload her groceries during their slow night of patrol. They’re surrounded by scared and suspicious townspeople, who form a tight and hostile circle around the heroes.

The young heroes quickly decide to get some space to figure out what’s going on, but before Superboy can fly them away from the town they’re attacked by Vandal Savage. They recognize the villain, and Faust pounces on the chance to apprehend them and use his magic to piece together where, and when, the two boys come from.

Upon learning that they are from this world, but from the future, Faust and Savage exchange maniacal looks of glee as they realize that they’re one step closer to their goal. Behind them, Rora observes both men, fear clearly expressed upon her features.

Analysis: The tale of the Super Sons continues in Challenge of the Super Sons #2, imagined and written by Peter J. Tomasi and illustrated by talented artists Max Raynor and Jorge Corna. The challenge dictated to Robin and Superboy by the Doom Scroll has not yet been completed, and the young heroes don’t waste any time fulfilling their tasks to save the lives of members of the Justice League, without their victims being aware.

This issue similarly unfolds like the previous one as the boys successfully prevent the potential death of a hero, in this case, Wonder Woman, by rescuing her from a minotaur-like creature. The involvement of the “lasso of lies” that Robin acquires from Batman’s secret weapons vault was amusingly explained and Superboy’s reaction to learning about this quite humorously well done. Their exchange at this part in the narrative was probably one of my favorites, especially Superboy’s comment about Batman becoming a super-villain and Robin’s unconcerned response.

Overall, the story’s plot isn’t overly complex or stressful; it didn’t take much more than a well-placed fist to the face for Superboy to defeat the mythical creature intent on killing Wonder Woman. Chances are, the Amazon would have managed to successfully defeat her enemy herself. Likewise, the involvement of some of the heavy hitters in the world of superheroes like Vandal Savage and Felix Faust doesn’t give the same sense of intensity as they have in some other story arcs.

The lack of stress in the story’s plot and development doesn’t detract from the Challenge of the Super Sons #2, however, as Tomasi keeps the energy where it’s most important; in the dynamic between Robin and Superboy. It’s obvious that as the author, Tomasi knows the pair well and keeps the dialogue flowing with such ease that it’s totally possible to imagine it playing out in real life. The quips and sarcastic comments never fail to make the story entertaining and the characters endearing, and overall it’s simply a lot of fun to read this light-hearted and engaging adventure.

Challenge of the Super Sons #2

The story of the Super Sons continues to deliver with its amusing dialogue and wonky predicaments. Despite its kid-like feel, this adventure of Robin and Superboy is one that is still enjoyable for those who love the characters, regardless of age.