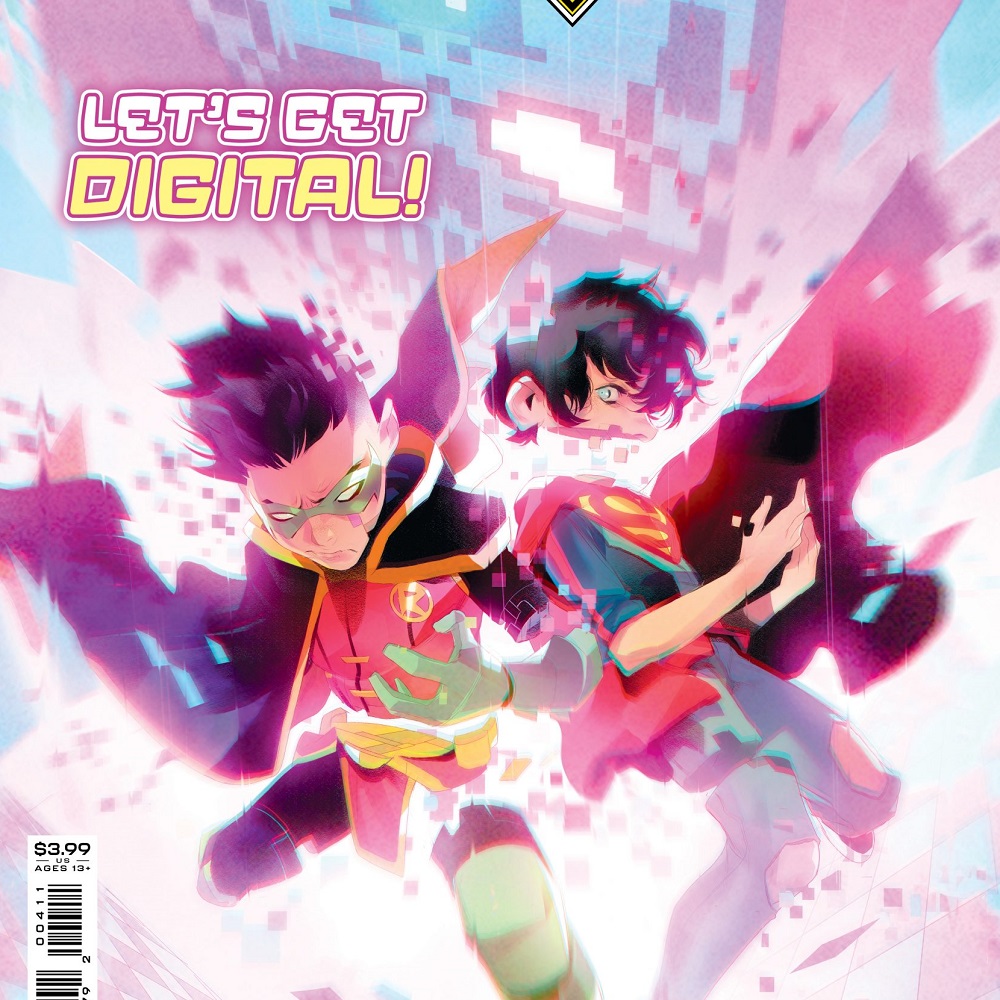 Overview: In Challenge of the Super Sons #4, Superboy and Robin find themselves face-to-face with Vandal Savage while they continue to follow the Doom Scroll and save members of the Justice League, all the while remaining undetected.

Synopsis (spoilers ahead): Challenge of the Super Sons #4 begins in Metropolis, as Vandal Savage, an immortal and notorious villain of the Justice League, threateningly holds the blade of his knife against Rora’s throat. In front of him, Robin and Superboy think through their options and how best to rescue their friend; it was Rora who gave them the Doom Scroll, a mystical parchment that is helping the young heroes save the cursed members of the Justice Leauge.

Savage issues his demand; the boys need to hand him the Doom Scroll, or Rora dies.

After cutting off Superboy’s rallying response, Robin directs Savage to the location of the Scroll, which is inside the flying machine they had stolen from S.T.A.R Labs at the start of their adventure.

Superboy isn’t impressed with Robin’s interruption, or that he just handed the location of the Scroll without a fight, but his mantra quickly cuts off as he registers what Savage is holding. In his hand is a balloon, the one still full of the toxic gas he’d stored in it when they had rescued Hawkgirl.

After conceding to Robin that yes, it was a good plan, Superboy uses his heat vision and pops the balloon right in Savage’s face, giving the boys enough of a distraction to go on the offense. The ensuing fight is over quickly, ending unsatisfactorily.

Savage, by some means, disappears.

Despite their desire to rush off and track him down, the latest message on the Doom Scroll takes precedence. Cyborg is in trouble, and they are the only ones who can help him.

Later, on the rooftop of the Detroit Hall of Science, Robin and Superboy lay beside the Scroll, wearing VR goggles. The VR interfaces will allow them to tap right into Cyborg’s mind without him knowing. The hero in question was infected by some kind of magical computer malware, rendering him frozen.

Inside the VR program, Robin and Superboy have free rein, with their imaginations being the limit. Robin is wholly unimpressed with Superboy’s decision to imagine a horse to ride on (his jet pack being way cooler) but Superboy isn’t bothered. Westerns are a big thing in his house, he’d love a horse in real life.

In the virtual landscape, a motionless Cyborg appears, the main hub of who he is and where his organic personality meets his programming. The menace isn’t far behind; Grid, a digital shadow of Cyborg lying in wait to take him out appears suddenly, not wasting a moment to attack the boys. Thinking ahead is Robin’s forte, however, and not too long after does Robin demand Supberboy to reach into his (digital) head and pull out an anti-virus he’d planted there before they’d logged on to Cyborg’s mainframe.

The anti-virus works just as planned, and the boys hastily make their retreat so they aren’t anywhere near Cyborg’s awareness when he wakes back up. As they prepare to head out, the symbol of Aquaman appears on the Doom Scroll, alerting them of the next hero in need of their help. They fly off and away from Detroit, unaware that they’re being watched by Cyborg.

“Hey, Clark,” he says over his communicator. “It’s Victor. From…work. Yeah, I’m good, but you wanna hear something weird?”

Analysis: The story continues to be a fantastic time with Challenge of the Super Sons #4, humorously written by Peter J. Tomasi and colorfully illustrated by Max Raynor and Luis Guerrero.

Two pre-teens, one with the powers of, well, Superman, and the other with a chip on his shoulder the size of Gotham are the only things standing in the way of certain doom hanging over the heads of the heroes of the Justice Leauge. The composition of the story is perfectly set up to be a fun, wild adventure of a time and that’s exactly what it is. The tone and flow of the story are as consistent as ever, and Tomasi continues to deliver on the banter and characterization of Robin and Superboy.

As with previous issues, the plot, while it does exist within the story, isn’t the focal point; defeating Vandal Savage and Felix Faust while saving cursed members of the Justice Leauge with the help of Rora and the Doom Scroll could have been a much bigger challenger than it is in this story. It’s kept pretty simple and easy for the heroes, however, and in that way doesn’t overtake the focus on the friendship and team-up of Robin and Superboy.

As per usual, I loved the sarcasm throughout Challenge of the Super Sons #4, which feels natural and very in character. The art further incorporates that into the character’s expressions, and the bemusement on the part of Cyborg at the end of the issue was great.

Challenge of the Super Sons #4

I love the well-written dynamic between Superboy and Robin and the befuddlement of the Justice League members as random events happen to them. The banter, character relationships, and comedic insanity of this story are still culminating in a really fun read, continuing to showcase one more story of the adventures of the Super Sons.