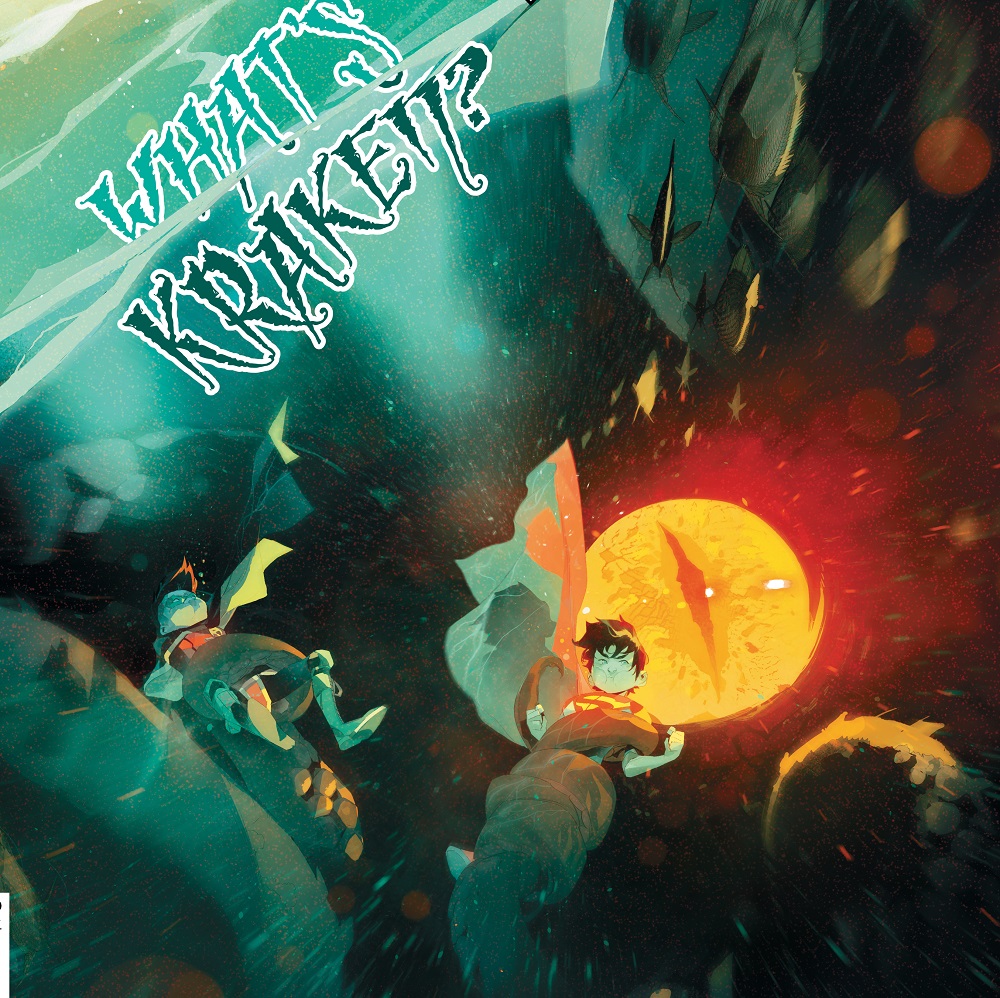 Overview: In Challenge of the Super Sons #5, Robin and Superboy continue to save the cursed Justice League members with the help of the Doom Scroll and Rora, but come to a startling realization about who their next victims actually are.

Synopsis (spoilers ahead): Challenge of the Super Sons #5 begins at the Hall of Justice, where Aquaman sits impatiently on the back of an ambulance as he is attended to by multiple EMTs, and recounts the events that led him to them. He doesn’t remember why he had been so terrified heading up to the surface from the ocean for Justice League monitor duty at the hall, but whatever it was, gave him such a strong feeling of fear that he nearly blacked out from it. Thankfully, however, he was able to make it to a nearby dock before needing to catch his breath, where he was able to recover until a giant sea monster exploded out from under the ocean.

Unbeknownst to Aquaman, the blame for both his bad feeling and the sea creature nearly landing on him lies firmly on the shoulders of two young heroes, Robin and Superboy, who were working hard to save Aquaman’s life. A version of the Scarecrow’s fear toxin specifically brewed by the Batman to defeat Aquaman in case he ever goes rogue was more than successful to get Aquaman out of the ocean, and hopefully away from whatever was going to attack him.

It doesn’t take long for the threat against Aquaman’s life to make its appearance; a Kraken attempts to drown Superboy, a creature clearly intended to take out the King of Atlantis, but Superboy and Robin haven’t failed an attempt to save members of the Justice League yet and this time is no different. The same fear toxin designed to incapacitate Aquaman works just as well as the deep-sea creature; that, coupled with a powerful punch by Superboy finishes the job.

Back on land and in the present, the EMTs are as confused as Aquaman, both as to what caused the half-Atlantean’s anxiety and what they should do with the Kraken they now have contained.

Standing on the rooftop of a nearby building and overlooking the emergency personnel and Aquaman below, Superboy and Robin confer together to figure out their next move. The Doom Scroll decides it for them, however, when a new symbol magically appears across the parchment. They’re both shocked to see their own symbols as they realize that they are the next victims.

Flashing back to England in 1521 after Rora had rescued Superboy and Robin from Faust and Savage, the three of them debate among each other what their next move should be. Rora didn’t have a choice in helping the two men hold the boys captive, but their arrival and memories of their adventures had given her hope and courage to run after them and subsequently away from Faust, who had been controlling her since her parents died at his hands.

The boys aren’t inclined to trust her but ultimately decided that her offer of helping them hide from their captors and get back home is too tempting. They seek shelter in the Nightshade Forest and run into the guardian of the magical place, a giant ogre that leads them into a hut built into a tree so they can hide safely.

They’re not as safe as they think they are, however; Faust, through a glass orb, can watch their every movement and tells Savage that the plan is almost complete.

“No more plans!” Savage responds and snarls that Faust’s magic has failed them again. Blood beats magic, every single time, and he plans to cut the children down, now.

Analysis: Robin and Superboy are back defending against the threat towards the Justice League members in Challenge of the Super Sons #5, written by Peter J. Tomasi and illustrated by Max Raynor and Evan Stanley, who bring the narration to life with colors by Luis Guerrero. While Raynor’s style lends itself to more of a comic book feel, Stanley illustrates the backlash in England with more of a, for lack of a better word, cartoon slant, giving the story a different, more child-like look. Although I do prefer the art done by Raynor, Stanley’s art does a great job depicting the characters as the young kids they actually are.

This issue focuses a bit on Rora as a young apprentice and gives voice to her motivations and reasoning. She may not have been able to act in the past, but her encounter with Robin and Superboy gives her the willpower to change her destiny. That small decision puts a thorn in the side of Faust and Savage, who, for all the time that he has been alive, hasn’t mastered the virtue of patience and closes the issue by declaring the death of Robin and Superboy at his hand.

The narrative on the part of Tomasi continues to be solid work, neatly balancing the flow of the story and characters. The snark and sarcasm between Robin and Superboy are as strong as ever, making this story one that is really fun to read; the dynamic and opposing personalities are spot on and written so much so that the reader can really believe they’re reading a story about two pre-teen boys being superheroes.

There are so many different lines that I absolutely loved, and I greatly appreciated how Tomasi smoothly integrated references to past issues, such as Tower of Babel, and other characters, such as Damian’s reference to Lois and the constant use of Batman’s contingencies for the Justice Leauge heroes.

Challenge of the Super Sons #5

Challenge of the Super Sons continues to be a ball to read, presenting a colorful and fun story that neatly blends action and adventure together in a solidly enjoyable story. From the dialogue to the relationships and pulse of the writing, I’m thoroughly enjoying this series and look forward to the future issues to come.