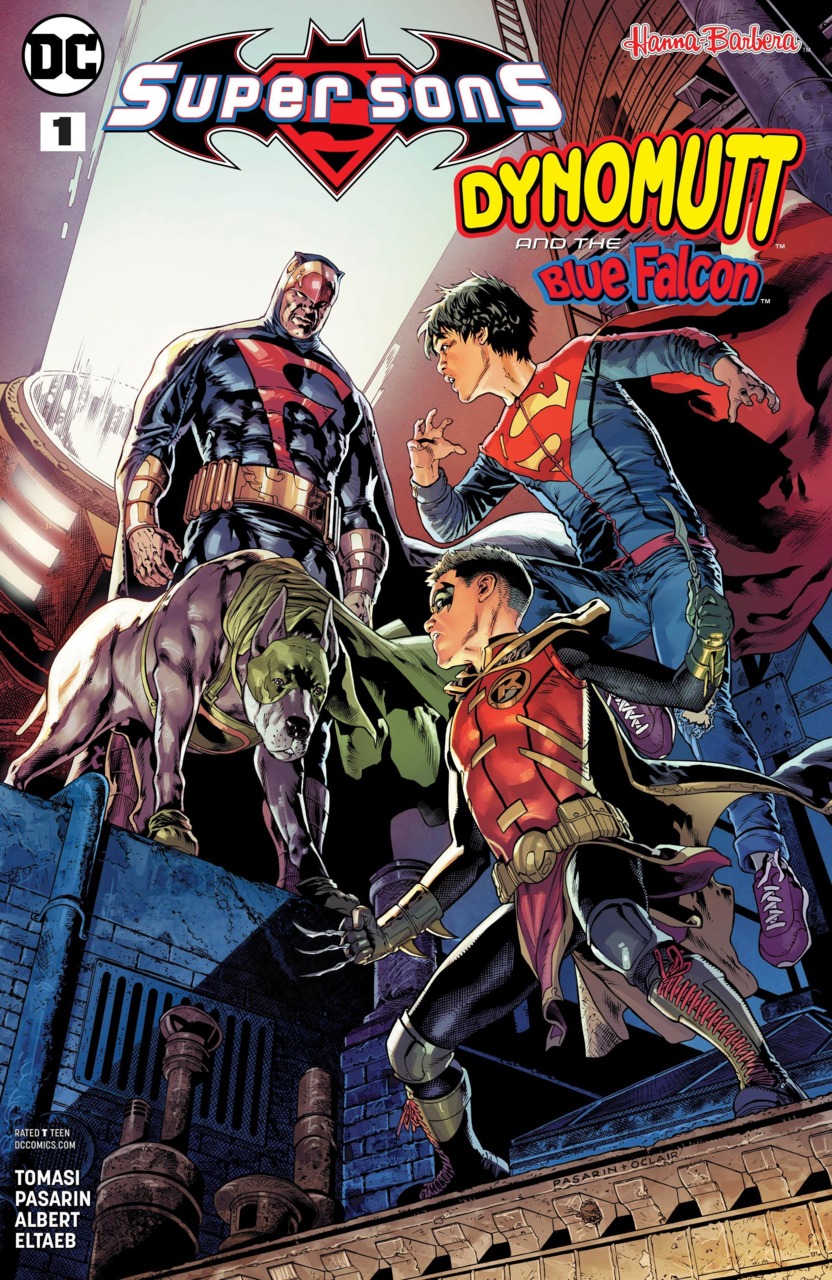 Overview: Jon Kent and Damian Wayne are visited by a damaged Dynomutt who needs help to save his best friend Blue Falcon.

Synopsis (spoilers ahead): Twenty years ago, rich kid super scientist Radley got a dog for his twelfth birthday. The two are inseparable for fifteen years until the pup gets ready to die. However, Radley uses his super science abilities to turn his pal into a robotic hero Dynomutt.

In the present, Jon Kent is at a wake for one of his parent’s friends. Damian shows up all Robin’ed up and asks him if he wants to skip the wake and get out on the town. As they talk, a seriously beat up and broken Dynomutt shows up and says that he and Radley, also known as the superhero Blue Falcon, have been attacked by Red Vulture.

They head to Red Vulture’s hideout. Red Vulture created by Blue Falcon just as Dynomutt was. However, RV’s body is decaying and he wants a more permanent solution and plans to use the dog body as is his solution. Jon and Damian arrive and commence fighting with BF and RV and some bird bot warriors. Red Vulture goes to download himself into the dog but Damian has put Dynomutt back into the body. This shocks the Vulture, who demands Blue Falcon kill the kids. Dynomutt is healed and back in business and confronts Blue Falcon, who becomes conflicted. Red Vulture shoots a death beam at Dynomutt but Blue Falcon jumps in front of it to save his four-legged robot friend and is killed. Dynomutt goes to kill Red Vulture but Damian and Jon intervene and say that he should be brought to justice instead.

Damian and Jon go to Radley’s funeral. After the mourners leave the grave-site the casket emerges from the ground. Dynomutt takes Radley’s body to this lab and resurrects him. The two can now be BFF’s again.

There are some odd choices, why does Blue Falcon have synthetic Kryptonite? Does he expect Superman to stop by? Damian is defeated very easily, doesn’t seem like the grandson of the Demon’s Head here. Also, it isn’t totally clear how Dynomutt got back into his robot body and what the ‘trap’ they set for Red Vulture was.

The weirdest part of the story though was why Red Vulture wanted to be put into Dynomutt’s body. Why didn’t he have Radley make him a new vulture body? It doesn’t really make sense. Like it was just to raise the stakes for no meaningful reason.

The penciler is Fernando Pasarin, inks are by Oclair Albert, colors by Gabe Eltaeb, and letters by Rob Leigh. The art overall is effective. Red Vulture looks decrepit. Radley can be identified as a kid, young man, and adult by his chapped lips which might not sound obvious, but worked.

I don’t know anything about Blue Falcon and Dynomutt but they were introduced very well and, except for the issues I note above, the story worked. I felt the camaraderie between the boy and his dog and that warm fuzzy feeling saved the book from being dragged down by its issues.

Final Thoughts: Jon Kent and Damian Wayne help Dynomutt save Blue Falcon in a heartwarming story that despite some plot issues, is reasonably successful in the end.