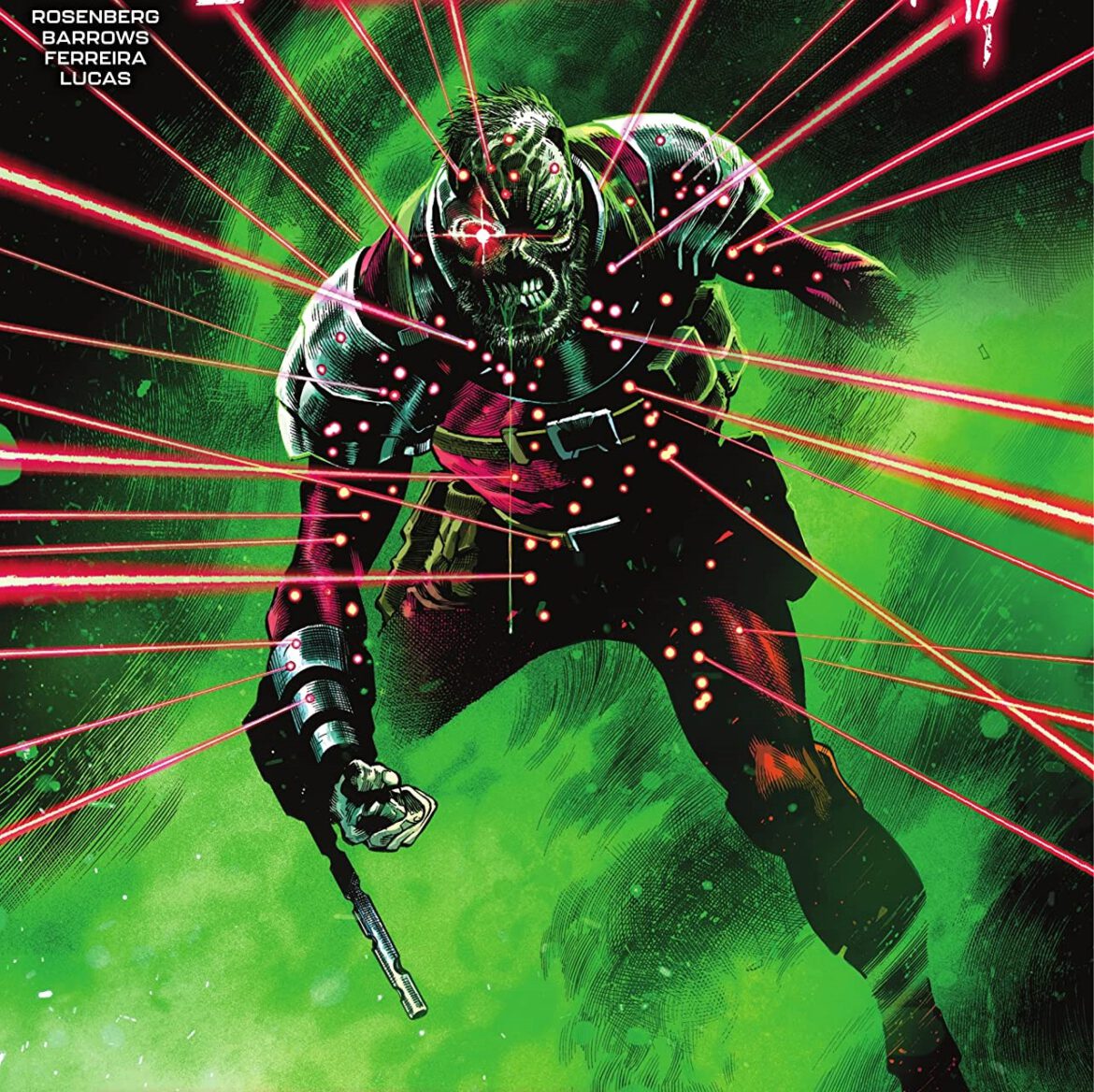 Overview: In Task Force Z #3, the mysterious benefactor of Task Force Z is about to learn the hard way that Red Hood is not good at following orders.

Synopsis (spoilers ahead): Task Force Z #3 begins in the Chop Shop, as Delia and Amelia, both identical women who went by the name of Dr. Shelley fight to keep Jason Todd alive. The bullet wound from Deadshot was more than successful, and despite their best efforts and Hana’s willingness to somehow help, Jason dies, his heart flatlining.

Death is no longer permanent, and with the quick motion of injecting a needle filled with Lazurus resin into him, Jason quickly gasps and comes back to life, demanding to know if they used the resin on him.

The women brush aside his question and tell him to get some rest; dying takes a lot out of you.

Later that night, Deadshot, now looking more like a zombie and less of a man, enters Jason’s room and tells him he wants to apologize, and asks if Jason can tell him what’s going on. Jason explains the use of the Lazarus Resin and Task Force Z. Similar to the Suicide Squad, but instead of a bomb in your head, it’s a needle in your arm. If Deadshot does this for long enough, however, he’ll receive a full dose which will bring him back to life.

In Deadshot’s eyes, the fact that they could save his life but instead choose to do otherwise makes Amanda Waller look like a saint.

An hour later Jason catches Hanna exiting the compound and follows her to a pizza stand where she orders them two slices. Sitting side by side, the two discuss their place in Task Force Z, and the journey that brought them both there. Ultimately, Jason hates Bane’s guts and doesn’t trust Crispin, their ever-elusive and mysterious leader. The two head back inside where one of the doctors meets them, informing Jason that Crispin would like a word with him.

In the comms room, Crispin informs Jason that he has another mission for him. Jason fires back that if wants the mission to get done, Crispin will need to give his team more of the resin. It’s not compassion, it’s Jason not putting his life in the hands of zombies.

Later, on the GNN tower in Old Gotham, the Kobra Cult members prepare to load an arriving helicopter with crates full of resin. To their shock, the helicopter opens to reveal no other than the Red Hood, who quickly orders his team to cut loose and take out their opponents.

The fight isn’t long, however, because Cheshire used contact poison on the Kobra Cult, which affected every member of Task Force Z but Jason due to his new armor. Cheshire was hired to protect the shipment, which Jason is trying to sabotage. The two start exchanging blows; in the midst of the fight, Jason’s pack of resin pills is knocked out, landing all over the floor and on top of a semi-conscious Bane.

As the fight reaches its peak, Jason informs Chesire that those pills in his pocket weren’t for him, they were for Bane. And then in the next second, the afore-mentioned villain has smashed Chesire into the ground, knocking her unconscious.

As the two stare at Chesire, Bane thanks Jason for getting Crispin to increase their dosage. Recognizing that Bane is now fully cognizant, Jason knocks him to his knees with one blow, asking Bane if he knows why, and to say it out loud.

Bane says two words, Alfred Pennyworth, and then Jason kicks him off the roof of the building, watching as the villain falls to the ground far below.

Hours later and across town, a man cloaked in shadow answers a computer, displaying the concerned face of Amelia. She tells Crispin that they have a problem; Jason Todd is gone.

Shocked, Crispin tells her that she better find him before it’s too late, when out of the shadows Jason steps forward.

“I think I can help you with that, Crispin,” he says. “Or should I call you Two-Face?”

Analysis: Task Force Z #3 picks up a little bit after the last issue where two identical women fight to bring Jason Todd back from the dead. Artistic team Eddy Barrows and Eber Ferreira carry on working their magic through the illustrations and support the writing with their use of colors, shadows, and muted tones throughout the series. During calm moments the warm hues are brought out, casting the characters in a more tranquil light whereas the cool, shaper colors highlight the action scenes and more serious moments quite nicely.

Writer Matthew Rosenberg continues the exciting and fun story as Jason struggles with his condemnation of the villains on his team, his decision to take justice into his own hands and kill the man who murdered Alfred, and the giant reveal of the face (or two different faces, as the case may be) of the man named Crispin.

The villains forced to work on Task Force Z are more humanized in this issue, and an almost strange sense of kinship can be felt throughout the pages, such as in the moments where the team is gathered around Jason while the doctors try to save his life after the events of the previous issue’s cliffhanger, and in the instances where they thank Jason for helping them, either with themselves or with increasing the Lazarus Resin dosage.

Perhaps the highlight of the story was the moment in which Jason Todd looked at Bane and then kicked him off the roof, all in the name of Alfred Pennyworth. Although morally and ethically the action is more than questionable and completely out of any line Batman might have taught or put in place, the decision felt very in character for Jason Todd.

The pacing of the story is holding up really well; while the initial issues were quite excitable and a little bit crazy, the overall tone of this issue is much more focused and serious. The societal ramifications of the Lazarus Resin are no joke, and Jason is no longer playing along with Crispin and his machinations and is obviously going to do something about it.

So far, Task Force Z is continuing to present itself as a solid book, combining a unique idea with humor, action, and character motivations that are now diverging and clashing. I look forward to seeing where the creative team leads the rest of the book and what’s to come next!