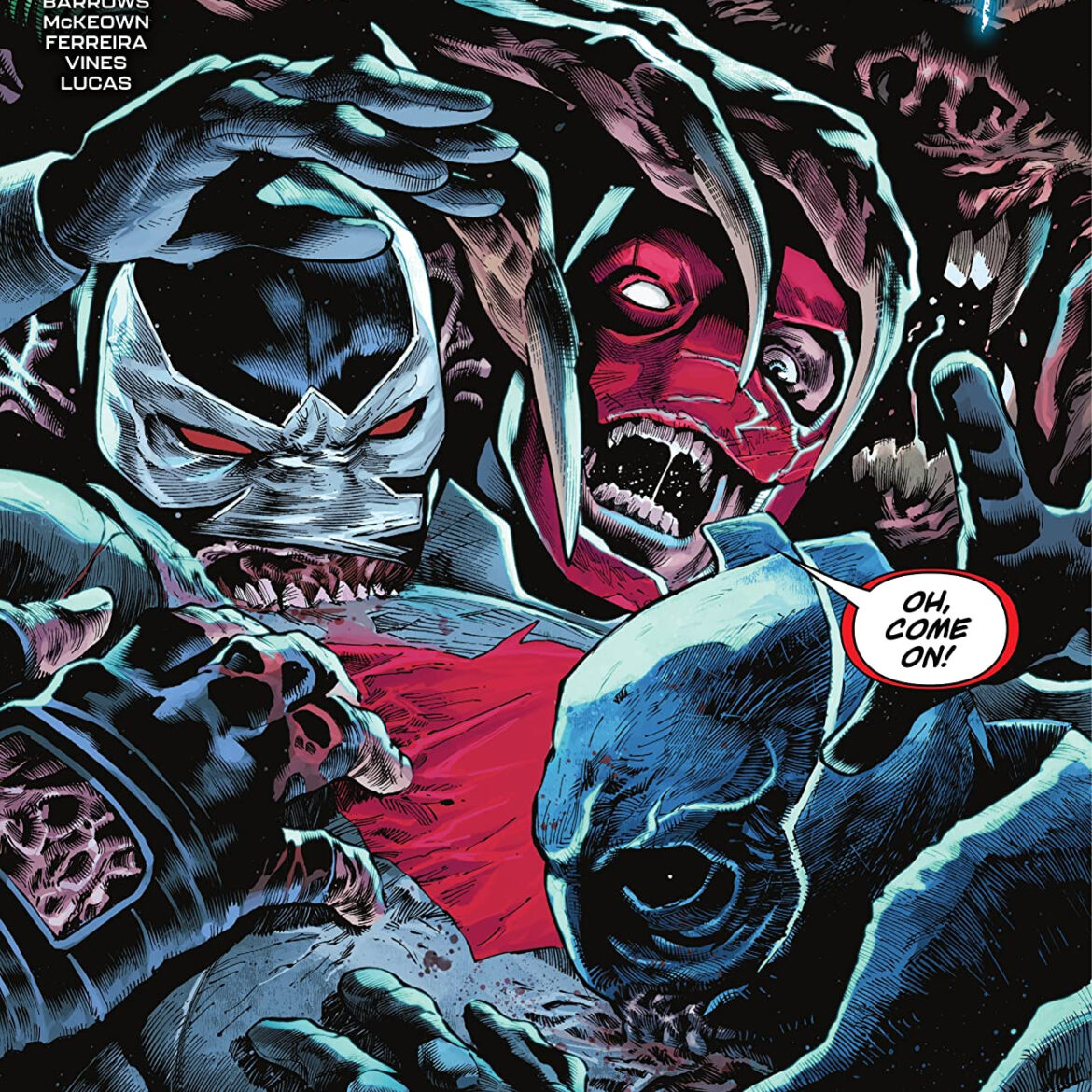 Overview: In Task Force Z #4, things are not what they appear as Task Force Z discovers that they’re not the only team using Lazarus Resin to secretly move around in Gotham.

Synopsis (spoilers ahead): Task Force Z #4 begins inside Crispin’s– now revealed to be Harvey Dent, otherwise known as Two-Face–home (or, base of operations), Red Hood stands before him, holding in each hand a crowbar crackling with electricity.

Neither man is very pleased to see the other. Jason doesn’t appreciate the fact that each member of Task Force Z has been locked away, despite Dent’s claims that Jason was never a prisoner.

Over at the Chop Shop, Dr. Shelley pats Man-Bat on her way, wishing him a goodnight now that all his vitals are normal. Once she’s gone, Mr. Bloom sneaks in and stealthily injects Man-Bat with Lazarus Resin, enough to turn him mostly back into a human. Mr. Bloom explains to a very confused (and concerned) Kirk Langstrom the situation; they are being held prisoner in an underground medical lab and being experimented on and forced, against their will, to serve on a paramilitary task force that only goes on suicide missions. Oh, and they’re dead.

Despite how the situation might look, Mr. Bloom isn’t there to help Langstrom. He’s there because, when the time comes, Langstrom is going to help him.

Back at Dent’s home, Jason demands proof that they actually are working for some mysterious government outfit on a top-secret mission. Dent provides him with a document and explains that they’re mostly a legit government organization; he’s working towards a contract, but currently, they’re operating on a temporary authorization. Although Jason might think otherwise, Dent’s only wish is to help people. Task Force Z isn’t just providing people like Jason and the others a second chance, it’s also a second chance for Dent to get back to being a decent human. Dent didn’t choose Jason for some nefarious purpose, he only chose him because he was a name on a list and because Dent knew that Jason needed this as much as he did.

Dent asks Jason if he’ll make the world a better place with him. Jason pushes his way out of the room, leaving Dent with no definitive answer.

In an alleyway outside, Batman drops to the ground, asking Jason if he was correct.

“Yes. And no.” Jason replies. It is Dent, but it’s complicated.

Batman takes the document Dent had given Jason earlier, stating that the signature looks authentic. Batman had sent Jason in to get information; he’s got it, and now he’s done. Jason disagrees, he doesn’t work for Batman. Jason wants to see things through until the end.

A cry for help further down the street catches their attention, and Batman and the Red Hood continue their conversation as they take down would-be muggers. Jason wants to believe that helping the world can extend beyond Gotham’s alleys after dark, Batman doesn’t believe that Task Force Z is the answer.

Back at the Chop Shop, Dent arrives to find he has a bigger problem on his hands than Jason knowing everything. Amanda Waller stands before him, stating that she’s decided to go with another team. Dent’s little science experiment was interesting, but effective immediately his program is shut down. Waller will be confiscating all of his unlicensed assets, meaning Jason Todd and all the corpses.

Three thousand feet above Gotham, Man-Bat is flying in circles as Jason tells Dent to explain the situation to him again like he’s not a sociopath who trains undead monsters like dogs.

Dent humors him; they managed to isolate some of the unique chemicals that are released in the production of the Lazarus Resin, and Man-Bat’s increased olfactory nerves will allow him to hone in on those chemicals and find the production facility.

The plan works, and Jason and the rest of Task Force Z arrive at another large warehouse, filled with what looks like a massive lab. A man, clearly a scientist, demands to know what they’re doing here, and then catching sight of Mr. Bloom, says it’s amazing that Jason has managed to capture him and bring him back. A second later, the man is knocked unconscious by Mr. Bloom, and then a few moments later, the rest of the corpses that were with him are similarly disposed of by Jason’s team.

Before anyone can do anything else, another group of people arrives, headed by a woman who looks exactly like Amelia and Delia. She works in the lab, and her name is Celia.

It turns out that Celia and Jason both think the other group is stealing their shipments all over the city.

Unobserved by either Celia or Jason, another group of anti-heroes and villains have entered the lab as well. The leader informs their director that they’re in the facility, but they’re not alone. The director demands to know who else is there. The response is the Red Hood, some dead guy dressed like a knight, a bat monster, Deadshot’s corpse, the skeleton form that singing Christmas movie, and a librarian. It’s a mess.

The woman responds through their communicator to clean it up. Nobody gets out alive.

Analysis: Task Force Z #4, written by Matthew Rosenberg and art by Eddy Barrows, Kieran McKeown, and Eber Ferreira with colorist Adriano Lucas, drives the story forward with the reveal of the mastermind behind the whole operation. Harvey Dent, once Gotham’s D.A. and villain is now just a man striving to help people, seeking redemption and a second chance for not only himself, but those he believes are yearning for one as well.

Jason Todd, once Robin and crime lord, now vigilante, is also trying to help the world, and although his goal might align with Harvey Dent’s, that doesn’t mean their methods do.

Running alongside that plot thread are two others by the names of Amanda Waller, who has effectively ordered the termination of Dent’s team, and Mr. Bloom, whose secretive actions have yet to be fully realized. Furthermore, it’s clear that the very conception of Task Force Z was more than just an honest attempt at redemption or to just carry out a government-sanctioned experiment; Jason’s involvement was first and foremost a way to gain intel and investigate Batman’s suspicions. Now, however, Jason’s involved and is going to see things through to the end, regardless of Batman’s inhibitions.

On the whole, I’ve been enjoying this series since the first issue, and it’s continued to remain enjoyable throughout. I love the horror elements used throughout the issues, emphasized by the art and the interaction between Jason and Dent and their sarcastic comments at the beginning of the issue. Additionally, I greatly appreciated the approach Rosenberg took with the moment between Batman and Jason later on in Task Force Z #4; there’s an obvious tension between the two of them and they clearly don’t see completely eye-to-eye (although, which child does with their parent), but it didn’t turn into an emotionally explosive and angst-filled scene. Lastly, the story is further exploring a unique adaptation of the use of the Lazarus Pits, and despite its rather light-hearted approach, it subtly poses the philosophical quandary: do the ends justify the means?

Zombies, suicide squads, and villains desiring a second chance at their humanity are all elements Task Force Z is focusing on while also developing several moving plot threads. It's not easy juggling many different elements, so I’m excited to see how the creative will handle that and, ultimately, how everything will play out.