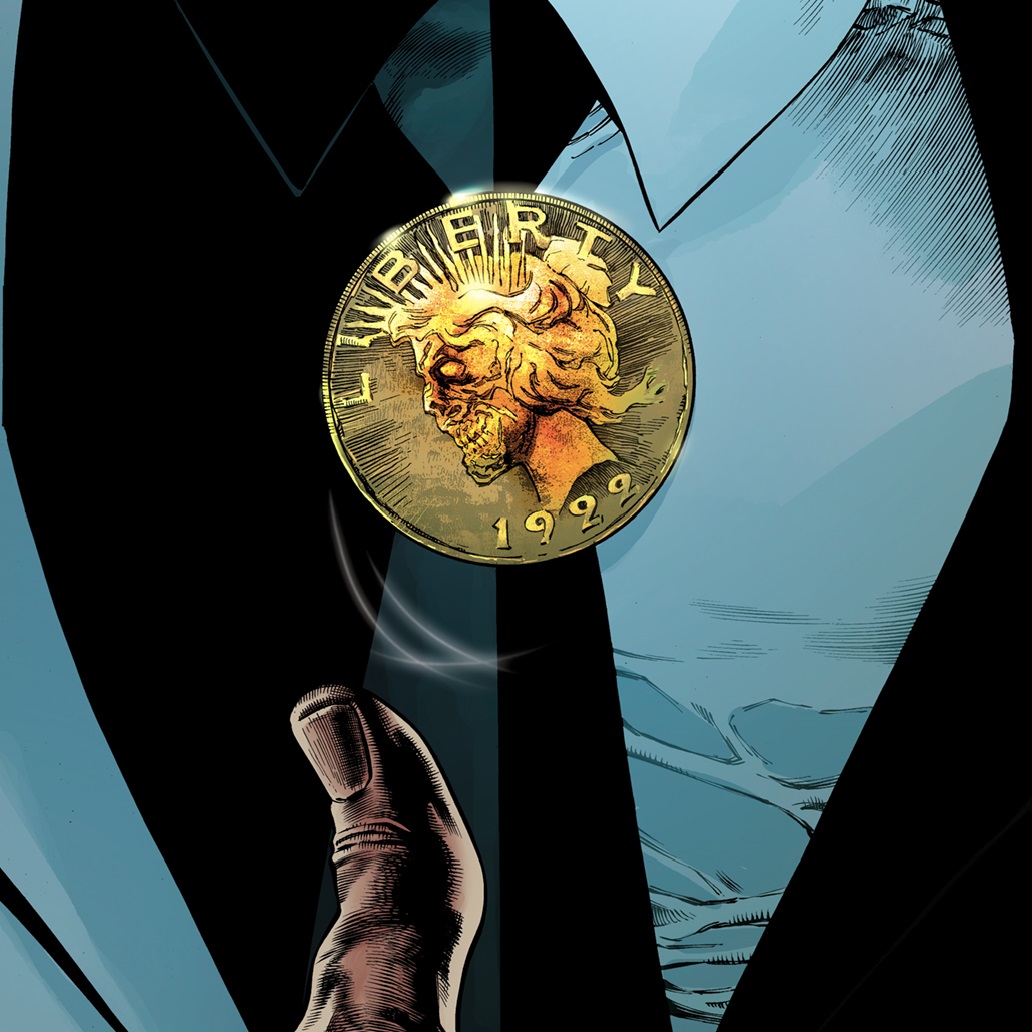 Overview: In Task Force Z #5, members of the task force find themselves in the grasp of an enemy team, face-to-face with danger and death.

Synopsis (spoilers ahead): Task Force Z #5 begins in a secret laboratory, Task Force Z, led by Jason Todd, faces off against what appears to be another undead dead army, headed by a woman who looks exactly like the two Dr. Shelleys and yet is most definitely neither of the twins.

Neither side is keen to drop their weapons, although, as Jason points out, neither team is interested in bringing public attention to themselves or their doings, which engaging in a firefight would surely entail.

Following Jason’s logic, Dr. Shelly’s look-a-like acquiesces and orders them to leave. Before Jason can lead his team out, they’re stopped in their tracks by yet another team, led by KGBeast and multiple other villains.

Jason scoffs and responds by informing KGBeast that they are all federal agents, and he and his team are known criminals and are now under arrest. Ironically, that was the same line KGBeast was just about to tell Jason.

Before further discussion can take place, Man-Bat, prompted by Mr. Bloom, snatches a soldier and smashes their skull in, starting a fight.

Back in the Chop Shop, Harvey Dent slams a door open and storms into the room where Delia and Amelia are engaged in a game of chess. Snarling, Dent demands to know if they’ve finished their assignment and why they’re just sitting around when everything is falling apart; Jason Todd is one step out the door, Waller is revoking his authorization, and now he’s lost contact with the team.

A few moves and one checkmate later, Amelia leads Dent below to their laboratory, explaining that they’ve done what they can, but they don’t have the funding, staffing, time, or experience to properly study the uses for the Lazarus Resin.

Dent waves all that off and asks if their experiments worked; if they’ve built-in memories and programming before, can’t they do it again?

Standing before a massive container filled with Lazarus Resin, Amelia tells Dent to ask the big boy himself as a monstrous form slams its hands against the glass.

Across town in the other secret laboratory, Task Force Z is engaged in a fight with the other mysterious group of beings, a group that looks very much like the Suicide Squad. As explosions reign down, Dr. Shelley runs through to another room, shocked to see Bloom appear next to her.

Bloom simply wants to offer his services in helping her not die, but in return, she must help him remove the power-dampening collar around his neck. Dr. Shelley grudgingly agrees.

Back out in the main room, the fight is brought to an utter halt when Solomon Grundy smashes his fist into Jason’s face, effectively downing the last standing member of Task Force Z. With that, KGBeast demands Madame Crow to get him Waller; it’s time to show that miserable woman their trophies.

At the headquarters of Powers International, a disgruntled Geri Powers finds herself even more disgruntled when Bloom appears in her office. It seems they’ve both found themselves in predicaments of which the other could take advantage of. Without Dr. Shelley, Geri Powers is a CEO of a floundering science and tech company suddenly without the means of making their product that will turn things around for them. Bloom just so happens to be a scientist without a lab, and while he might not be able to recreate Dr. Shelly’s work, he brought someone who can.

In response to Geri demanding to know who that might be, Bloom presents to her the head of Man-Bat.

Elsewhere, Jason Todd wakes up to find himself chained to the ceiling next to Deadshot, both of whom are bound hand and foot in front of KGBeast. On a screen in front of them, Amanda Waller expresses her grave disappointment in both captured individuals and with that informs KGBeast that she is done with Jason Todd and gives him permission to pull the trigger. Crying out in protest, Deadshot breaks free of his chains and jumps in front of the gun just as the trigger is pulled, falling to the floor dead.

Pissed, Waller orders KGBeast to finish with Jason and to make sure he gets everything in the labs and wraps things up by burning the whole site. She then signs off, leaving just the two men in the room. Snarling, Jason states that Waller is playing KGBeast, who fires back that it’s really Jason who was played. Where is the good Harvey Dent to come and save him now?

“Funny you should ask,” a voice says from behind them, and there, flanked by a newly resurrected Bane and Mr. Freeze, stands Harvey Dent.

Analysis: Matthew Rosenberg and artist Eddy Barrows once again deliver a gritty, entertaining issue with Task Force Z #5 as politics, morals, and the pursuit of scientific discovery cause multiple groups of people and literal monsters to collide with each other, all of whom claim to be the ones in the right.

Just when things appear to be contained enough for an actual civil conversation to resolve matters, Mr. Bloom subtly prompts Man-Bat to initiate a fight, which provides him just the right amount of coverage to achieve his goal of removing his power-dampening collar and, somewhat surprisingly, scores himself a job with Powers International. Clearly, his end-game hasn’t yet been realized, and what that is, exactly, has yet to be revealed.

In a lot of ways, Harvey Dent seems to be genuine with his motivation to simply help people; news of the team’s dismantling and potentially losing Jason clearly don’t sit well with him, enough so that he actually arrives in person to rescue Jason from KGBeast. The division between him and Amanda Waller is starting to form, the chasm noticeable now that Harvey Dent has blatantly defied Waller’s orders.

At least Dent isn’t alone with his frustrations regarding the less-than-ideal situation; Waller was royally pissed to have lost Deadshot due to his ridiculously heroic act to save Jason, and managing her minions isn’t as smooth-sailing as she’d like, clearly. Similarly annoyed is Geri Powers, who resorts to negotiating employment with Bloom as a means to continue production and keep her company afloat.

The story continues to balance all three groups, each of which are striving to obtain their own objectives and keeps the story and plot moving. The emotions of the characters are felt and enhanced by the art, which doesn’t shy away from heads rolling and characters getting stabbed. It’s dark, gritty, and manages to focus the story on Jason as the main character but utilizes the ensemble cast tactfully.

Task Force Z remains entertaining and fun, successfully focusing on Jason Todd’s character while balancing a large cast of characters and debating the dilemma of morals and ethics. In the end, there are a lot of moving pieces at play, and it will definitely be interesting to read how they’ll all be resolved.