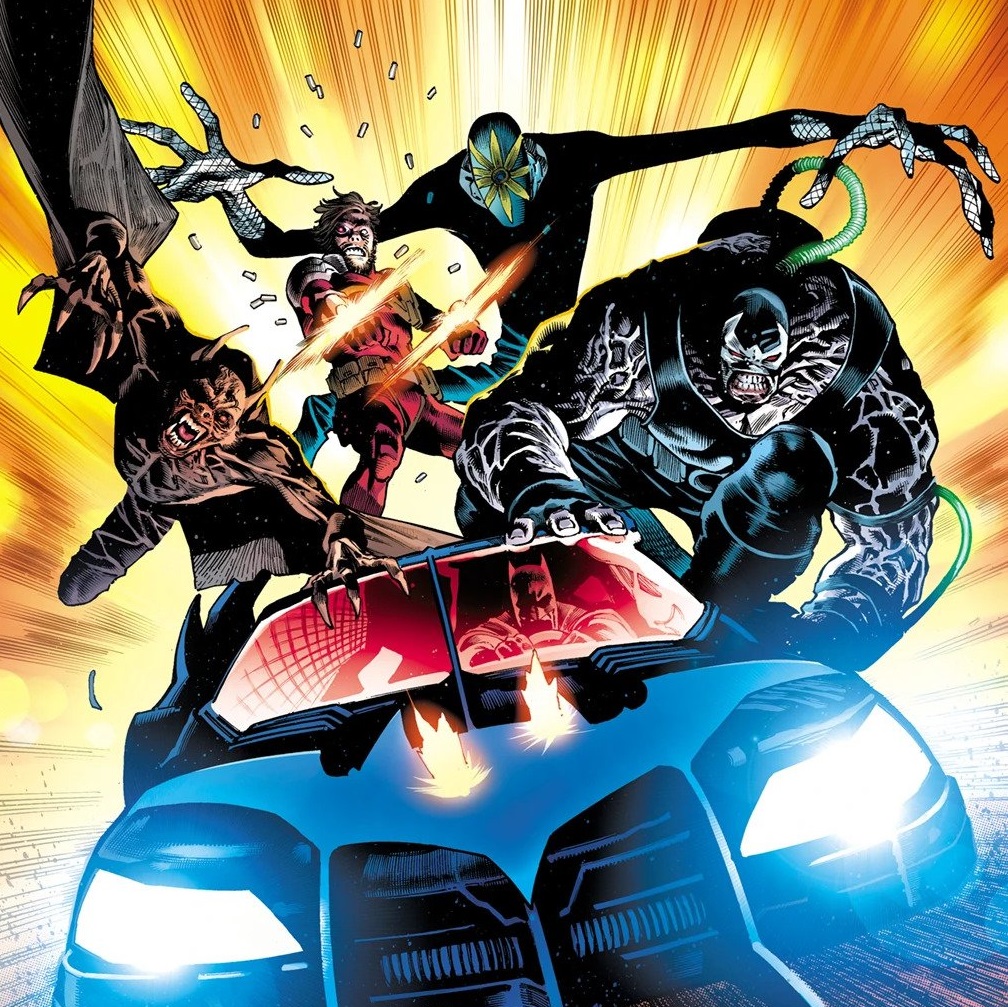 Overview: In Task Force Z #6, the titular Task Force Z finds itself in a grim spot, with its members betrayed by one of their own and bereft of support.

Synopsis (spoilers ahead): Task Force Z #6 begins in a secret laboratory, months ago. The pop of a champagne lid coming off fills the air as a scientist by the name of Dr. Walters Albrecht exclaims that it’s time to celebrate. Geri Powers, employer, and funder of their experiments with the Lazarus Resin has deemed their experiments a success and that production can begin immediately.

The team gathered before him, Bloom, Mitch, referred to as the Resurrection Man, and Dr. Shelley look on unimpressed and unreactive. Mitch replies that Walters is playing with things he can’t comprehend, and Bloom’s only interest lies in asking if he’s allowed to leave.

Scoffing at both their negative reactions, Walters takes his champagne and turns to leave, stating that they should try to make the day one to remember. Agreeing wholeheartedly, Bloom combines two chemicals and smashes the glass container on the floor, causing the whole room to explode in a cloud of flames.

In the present, a very bloody Jason Todd still dressed in his uniform but sans the red helmet, grins at KGBeast. The chances of the man killing Jason before Two-Face and his team get to him are low, and the fight breaks out immediately. KGBeast isn’t impressed with the rescue party; Jason doesn’t waste time, and a few moves later, with the help of Bane, KGBeast lies sprawled on the floor, shocked and dazed after getting smashed into the wall. Noticing KGBeast’s huffing laugh, Jason calls for Mr. Freeze to throw up an ice shield seconds before a grenade goes off, filling the room with an explosive ‘boom’.

Flashing back to several months ago, Dr. Walters Albrecht and Geri Powers walk among the rubble and debris of the room, observing the rescue team clearing things out. Geri Powers is non too pleased to learn that the work is gone, all the data and samples have been destroyed, and both Shelley clones and Bloom’s bodies are missing. Everything will need to be recreated from the ground up.

In a house elsewhere, Mr. Bloom greets a man named Mr. O’Connor as he enters his house, the two Shelley clones with him. Mr. Bloom was an immense admirer of O’Connor when he was Senator; he didn’t vote for the man but was still so sad to see it end so badly and to hear the man has fallen on hard times. Presenting a briefcase full of cash, Mr. Bloom says that he’d like to fix that for him.

Task Force Z #6 jumps back to the present, Two-Face commends Jason for his quick thinking with Freeze and says they will discuss the schematics of Jason working with Bane in the truck. They need to leave before any other “friends” decide to show up. They take with them KGBeast, and as they exit, Jason asks where everyone else is. Two-Face says that they’re it; Deadshot’s brain was destroyed, they can’t find Sundowner or Man-Bat’s heads, and who the hell knows where Mr. Bloom is?

Sometime later in the truck, Jason snaps to Two-Face that they’re going to have a long talk when they get back. The trip home is going to be delayed a bit, however, with the arrival of the Batmobile. Annoyed, Jason states that he’ll deal with Batman and jumps from the bed of the truck onto the moving hood of the Batmobile, telling Batman to pull over.

Later, the two men stare each other down, neither backing from their convictions. In Batman’s opinion, Jason is off running around, following very bad men down a very bad path. Exasperated, Jason demands to know why Batman can’t just admit that he was a father to Jason and just trust him on this one. If there is no hope for Two-Face and others to be saved, then there’s no hope for himself. If Batman wants to lock them away in Arkham or Blackgate, it’s all of them, Jason included. But if not, they need to be on their way to stop something bad that is bound to hurt a lot of people.

Once again flashing back to a time months ago, O’Connor provides Two-Face with a demonstration of the Lazarus Resin, explaining that he wants Harvey Dent to head his project of selling immortality. Later, Harvey Dent presents the idea to Amanda Waller, who acquiesces that Task Force Z could be helpful to her and something she could sell up the chain. It will, however, need a pretty face and thankfully Two-Face already has someone in mind. Presenting a picture of the Red Hood, Two-Face says that they’ll need her to help bring him on board.

Later, at the Chop Shop, free of Batman’s interference, Dent stares at his destroyed laboratory in anguish. The only two people in the lab are the Shelley twins, who hid away waiting for Two-Face and the others to arrive. Bloom marched through and destroyed everything, him and a small army of others who worked for international powers.

In Two-Face’s opinion, they’re screwed; Bloom trashed the lab, took their resin, and although the Shelley Twins might be able to extract some from the remains of old corpses, it would take a few days at least. As a cherry on top, Bloom left with them O’Connor’s dead corpse, and with the resin all gone, no way for Two-Face to talk with him.

As one last resort, Two-Face brings the team and the Shelley Twins to Amanda Waller’s secret office, the same one he pitched the idea of immortality to her months ago, only to find it empty and clean of any sign of her presence.

Two-Face once again exclaims that they are screwed, while Jason says that they’re almost screwed. Waller knew it before they did, but at least now they have confirmation. They were played, but now it’s their turn; it’s time to kill Mr. Bloom.

Analysis: Task Force Z #6 brings to light another layer of the ever-deepening plot, which reveals the puppet master to be none other than…Mr. Bloom.

Matthew Rosenberg and artist Jack Herbert kick things up in this latest issue, with both the plot and accompanying art carrying the story forward. Task Force Z is clearly not having the best day of their lives; Jason Todd manages to escape the grasp of KGBeast with the help of the vestiges of his team, composed of just about half of them. Two-Face’s entire operation is left in tatters by the hands of Mr. Bloom, leaving the team bereft of Lazarus Resin, two dead corpses, an unconscious KGBeast, the Shelley twins, revealed now to be clones and daughters of the Resurrection Man, and finally, a dead ex-senator and Amanda Waller disappeared off the face of the planet. Regardless, it’s most definitely not the worst situation Jason Todd has been in, and in his opinion, they’re not quite screwed.

Their plan to stop something unknown and very bad from happening is almost diverted by none other than the Caped Crusader, who has strong feelings about Jason allying himself with criminals. Whatever way you want to spin it, the “ends justify the means” philosophy doesn’t fly with Batman, and that point is made abundantly clear to Jason. Here, the story really highlights the core face of the comic. In Jason’s mind, the situation is obvious: if there’s no hope for the likes of Two-Face and Bane, then there’s no hope for himself.

While the lead up to this scene was not my favorite–Jason and Bruce beating each other up as a way of facilitating a conversation has been way too overused and isn’t demonstrative of adults trying to repair conflict–I did like the approach Jason took to explaining his point of view. The familial relationship the two men had, as father and son, is stated blatantly and acknowledged for what it was. Sadly, the scene changes swiftly after Jason’s closing request for Batman to get out of their way, however, it presented better than other explosive conflicts the characters have been engaged in other comic storylines.

Overall, the series continues to be entertaining, dark, gritty, and balances just the right amount of cynicism with hope. Mr. Bloom is finally playing his hand, and it’s obvious that Task Force Z intends to respond in kind. There is still no love lost between Jason and Bane, although the latter doesn’t seem to be irritated by the fact that Jason brought about his death (again), however that could be quick to change. Amanda Waller and Bloom’s intentions with his little coup are both still in the wind, and how that plays out will hopefully be revealed soon.