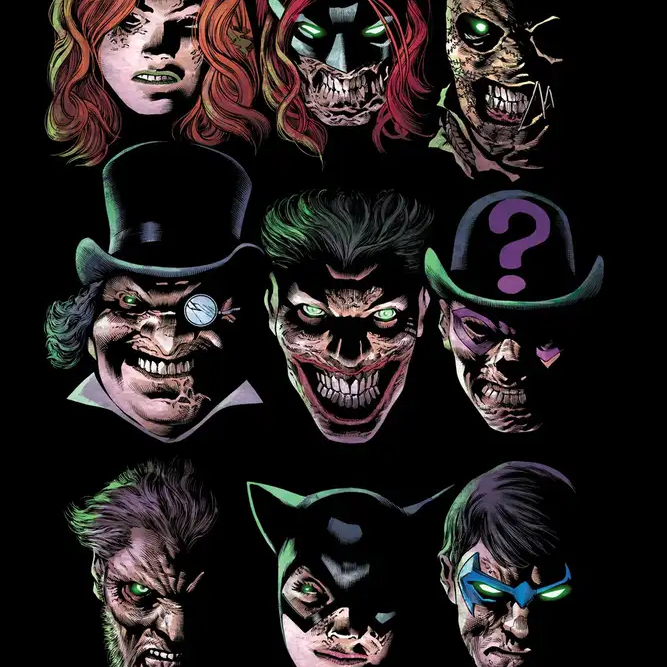 Overview: In Task Force Z #7, stuck between a rock and hard place, such as potentially dying for good, Task Force Z decides to bring the fight straight to Mr. Bloom. Even the best-laid plans, however, go awry.

Synopsis (spoilers ahead): Task Force Z #7 begins with Jason Todd awakening from a horrific nightmare with a gasp and is more than a little disgruntled to find the Shelley twins sitting by his bedside. The team is ready, and although they’ve lost their ability to mass-produce the Lazarus Resin, the doctors were able to synthesize enough to keep Jason’s team operational, barring him getting them all blown up. Again.

The question of how to handle Bloom comes from Harvey Dent, addressed to Jason. Bloom has money, clout, and violent tendencies; he’s thinking ten steps ahead of them and most likely building an army.

Which is exactly what Jason intends to do.

Thanks to KGBeast, who put Amanda Waller’s hit team together and his knowledge of their current location since Waller’s disappearance, Jason sends a member of his team to go hunt down and retrieve them.

Copperhead is apprehended by KGBeast, Madame Crow is captured by Mr. Freeze within a safe house of the Victim Syndicate, and Solomon Grundy is convinced to join Task Force Z by Bane utilizing the tempting allure of friendship. Finally, Victor Zsasz is brought in by Jason himself.

Regardless of the logic behind Jason’s plan, Dent is worried. They need a bigger team, but bringing even more people back with what little resin they have left means that they don’t have much time or any safety net.

Although there is no track record of success backing his decision, Dent decides to try the diplomatic approach first, before resorting to an all-out war.

At Powers International Headquarters, Geri Powers is disgusted by Bloom’s experiments; Man-Bat’s face is fixed in a snarl, while his body remains that of a baby. Dismissing her repulsed reaction, Bloom casually inquires if Geri could assist him in gaining access to the Miraclo formula they’ve been working with, code-named Project Snakebite. This time, Geri’s reaction is calculated, claiming she has no clue what he’s referring to.

Bloom isn’t deterred; he’s simply worried about all the problems headed their way and wants to ensure preparedness.

Just as the CEO demands to know what Bloom is talking about, an employee pokes his head in and catches her attention; the problem in question is waiting downstairs.

Back at the Chop Shop, Amelia and her twin continue synthesizing the Lazarus Resin, pausing when Mr. Freeze returns. None of the other members are present, and catching sight of the bags of resin, Freeze asks if it’s enough to bring someone back from the dead momentarily.

Amelia promptly responds that it’s enough to bring someone back to life permanently, but of course, they need to split it amongst everyone in the team. Catching sight of Freeze’s maniacal grin, Delia commands her twin to stop talking, immediately.

Too little, too late.

Task Force Z #7 continues at Powers HQ, as Harvey Dent greets Geri with acknowledgment of his appreciation for seeing him on such short notice. Clearly, both teams are at an impasse; Harvey Dent is technically wanted by law now that Amanda Waller has disappeared, but Geri Powers can’t call in for his arrest, considering her less than ethical business ventures.

Harvey’s proposition is simple: turn Bloom over to them, shut down his experiments, and stay out of the super-villain business. Or Dent will give a signal, and the team of undead monsters waiting in a van parked in her underground garage will come out and eat an awful lot of her personnel. When federal agents come to clean it up and find that those monsters were made with a product she herself authorized development for, well, like most Americans, the chances of them seeing a clear line between CEO and super-villain might not be very high.

Heading toward the exit, Dent states that they have twenty-four hours to think over his offer. After that, they go to war.

Arriving back at the Chop Shop, Dent takes in the doctors and Jason’s grim expressions and demands to know what the problem is this time.

They have two: their second issue is the fact that KGBeast and Bane are both dead…again, caused by their first problem. Freeze absconded with all their Lazarus Resin, ingesting it all and fully coming back to life.

Starring aghast at the row of dead bodies lying before him, Dent is more than concerned. He’s just told the head of one of the most powerful and seemingly least scrupulous corporations in the world that he’s sending an army after them. An army that’s currently lying in a neat row of dead corpses.

Unless someone has a stash of Lazarus Resin stashed somewhere, now would be the time to come up with a new plan.

Sighing, Jason pinches the bridge of his nose admitting that he actually does. The only drawback is the guy he gave them to is not going to want to give them back.

Analysis: Task Force Z #7 wraps up by leaving the group in a worse shape than when the issue started, backed into a corner, and facing bigger odds with fewer recourses than ever. Harvey Dent is clearly having a day, and just when things begin to possibly look up, the team is stabbed in the back by one of their own (although, it’s definitely not a huge surprise) and left facing an opponent they’re ill-equipped to beat, despite Jason’s recruiting and forward-thinking.

Matthew Rosenberg continues to deliver, the story reading as a part redemptive journey, part philosophical quandary, and part sarcastic comedy due to the ridiculous and somewhat pitiful issues the team deals with. Truthfully, for two extremely intelligent doctors who are able to synthesize Lazarus Resin from a dead corpse, neither display that intelligence by providing Mr. Freeze with the exact details of how much Lazarus Resin they have. This moment felt like a plot device that simultaneously fit the story because honestly, that’s just the sort of thing you expect when reading this series.

Jack Herbert and Daniel Hdr create the art for this particular issue, which at some moments feels very engaging and stylized during the fight scenes, specifically between Jason and Zsasz, and at others a little stiff with some awkward expressions, such as Geri’s reaction to Bloom’s Man-Bat experiment.

The ending of Task Force Z #7 is a great set-up for the story to develop in a very interesting way. Morality isn’t understood in the black and white for the majority of the characters, and exploring that idea alongside their decision-making could provide the environment for some great character interactions or produce the complete opposite. Fingers crossed it’s the former.

Overall, Task Force Z is, minimally put, an entertaining read. Red Hood and Two-Face make a good pair, and there’s enough of a plot within a plot to keep the storyline moving and provide the sense that things are progressing. Now, how Task Force Z deals with Batman in the next issue will be very interesting to read!