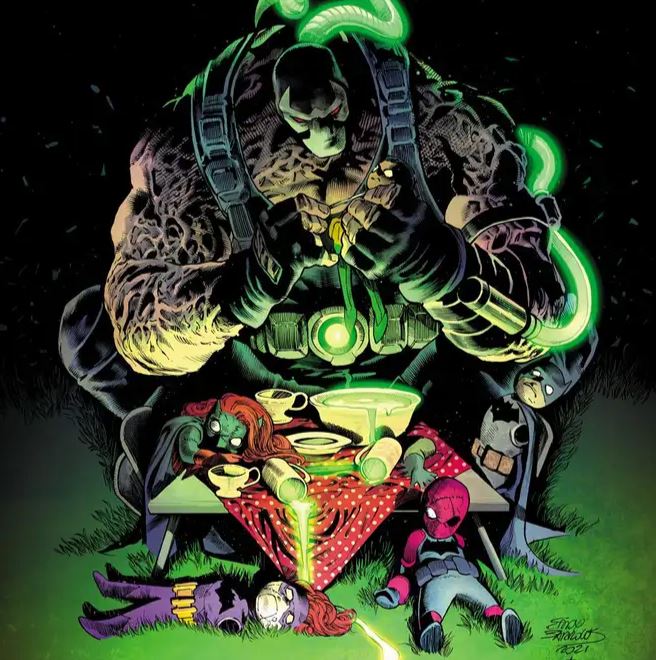 Overview: In Task Force Z #8, Jason’s mission to break into the Batcave brings up several family matters as several unexpected heroes deter him.

Synopsis (spoilers ahead): Task Force Z #8 begins in a (mostly) empty street in Gotham City, as Task Force Z rams their van headfirst into a parked truck, creating an explosion that they hope will work as a ploy big enough to draw out Batman.

Across town and at the location of the new Batcave, Jason observes the Batmobile swerve out of the streets. Jason subtly make his way inside the hideout, telling Dent to stall long enough for him to get the resin and get out.

Unfortunately for him, Batman wasn’t the only occupant in the Batcave that evening; greeting him is non-other than the first Batgirl, Barbara Gordon herself, who asks Jason what brings him around to their side of town.

The ethical violations and lack of proprietary scientific equipment shock Dr. Acheron, but Bloom is not pulled by his dismay and is more intrigued by learning about some of the other projects Powers International has worked on over the years. Surely after working together long enough, Dr. Archeron will let Bloom pry them out of him.

At the Batcave, Jason and Barbara go back and forth for some time before Jason’s able to convince her that he only came to get another communicator to replace the one he destroyed when he was mad at Batman. When Barbara leaves to get him one, Jason recovers the resin sample and departs, only to be stopped by the arrival of Nightwing.

Jason’s actions within the Batcave are known to Nightwing, thanks to Barbara’s security, and unfortunately, there is no way either of one of them is going to come to a peaceful solution. Their fight is brought to a temporary halt by the arrival of Tim Drake, Robin, and Batgirl, Cassandra Cain, before it continues with Jason against his other ‘siblings.’

Across town, Dent manages to steal some extra time by blowing up the Batmobile, but he’s sure it isn’t going to last long.

The brawl between the heroes leads to Jason being thrown into a woman carrying groceries home, and after helping her get back to her feet, everybody resumes their battle. It’s bloody, thanks to Jason, and a verbal spar just as much as a physical one. Nightwing and the others disapprove of Jason going solo and disobeying Batman’s orders to pull out of his undercover mission. Jason retorts that he’s doing something necessary and wouldn’t have stolen the resin if he didn’t absolutely have to.

When Jason lets his guard down for a moment, Nightwing takes advantage of it and manages to knock him down. Despite searching his person, it’s clear that Jason doesn’t have the resin, and it’s then that they all realize the woman carrying the groceries was clearly someone working on Jason’s team. He’d managed to pass it off to her without anyone noticing.

Looking up at them from his place on the floor with his hands bound behind his back, Jason asks Nightwing what they’re going to do about what he’s been working on. Powers International has been and currently is involved with things that are not okay, and it’s been happening right under Batman’s nose. Now, Jason has a chance to stop it, but he can’t convince Batman to trust him on it.

Jason made a deal with some bad people to get what has to be done, and if that makes him one of the bad guys, he’s fine with it because what he is doing is right. They can all compare scorecards when he’s done.

Less than impressed with his argument, Nightwing’s rebuttal is interrupted by Batman gaining his attention through their communicator, saying that Task Force Z’s base is packed up; the whole lab is cleared out.

Batman needs to talk to Jason, and just as Nightwing turns around to relay Batman’s latest update to Robin and Batgirl, they’re all shocked to find themselves alone. Jason has disappeared.

Analysis: It’s dysfunctional family time in Task Force Z #8 as the other members of the Bat-Family try to prevent Jason from departing with the Lazarus Resin while Batman deals with the rest of Task Force Z. While I was somewhat (pleasantly) surprised that it was Jason vs. Nightwing and company instead of a battle against Batman like I was expecting, unfortunately, I wasn’t as taken with the overall predictability of the events that unfolded.

Although I did appreciate the way in which Mathew Rosenberg wrote Barbara and Jason’s conversation and then focused the majority of the story on the dynamic between Jason and the others (and thought to include almost all the current Gotham heroes aside from Damian, Stephanie, and Duke, who are both mentioned). At this point in comics, the plot point of ‘Jason fights the Bat-Family’ has been a bit overused. (I would have been shocked if there had been an actual adult conversation between the characters that resulted in a productive game plan, but that doesn’t mean I wasn’t hoping for it). It wasn’t my favorite way to move the plot forward or provide insight into the strained relationships between the characters, but perhaps later in the series, we’ll be able to see how the heroes of Gotham can all work together and face the enemy in front of them instead of each other.

Overall, I believe Task Force has been evenly hitting a solid score in both the writing and art departments, with some ups and downs. I’m not a fan of the classic trope of Jason versus the Bat-Family, but I still appreciate that they were involved and the amount of time dedicated to developing and presenting their relationships with each other. Harvey Dent’s characterization and interactions with Batman in this issue were comedic and well done, and the scene with Mr. Bloom and Man-Bat actually made me slightly uncomfortable, which I believe was the intention.

There are now multiple groups vying after their own end goals– Jason with Task Force Z, Mr. Bloom, Geri Powers, and Batman and the other heroes of Gotham pursuing Jason and his team. Here’s to hoping that it all leads to an epic conclusion.