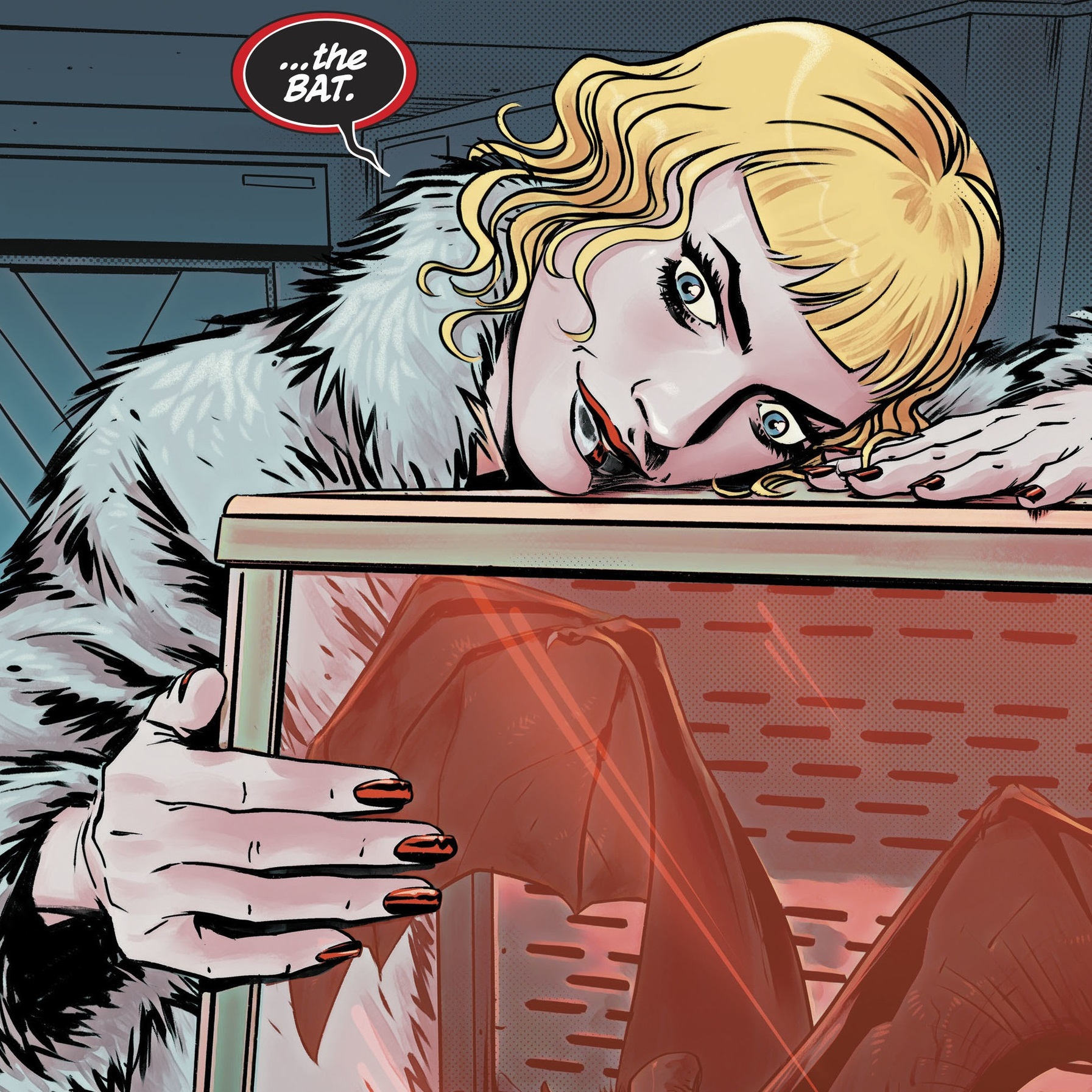 Welcome to Part Two of Twisted Sister: A History of Beth “Alice” Kane, a detailed look at the chronological comics history of Batwoman’s sister (and Batman’s cousin) Beth Kane. In Part One of this article, we left off in the New 52 in the middle of an ongoing story by JH Williams III and W Haden Blackman, so that’s where we’ll pick up now. Beth Kane, aka Alice’s, story continues with the conclusion of the “This Blood is Thick” arc—in Batwoman #24 (by Williams III, Blackman, Trevor McCarthy, et al, December 2013) and Batwoman Annual #1 (by Marc Andreyko, McCarthy, Moritat, and Guy Major, June 2014). If you notice the gap between the final two issues, this is because Williams III and Blackman had a huge falling out with DC Comics at the time and quit/were fired due to creative differences. So the story goes, Williams and Blackman were pushing the relationship between Maggie Sawyer and Kate Kane, hoping to soon make it the first lesbian marriage in mainstream comics. Unfortunately, DC head Dan DiDio and others didn’t like that direction and said no. Despite having already written issues #24-25, Williams and Blackman parted ways with DC on bad terms—with fiery Twitter words exchanged from both parties—leaving those two issues in never-to-be-published-Limbo forever. Andreyko and company were brought onto the book and they finished the arc a few months later. Who knows what Williams and Blackman originally had in mind for Alice? We might never know.

Onto the synopsis of what was published! To lure Batman (and his main target Jake) out into the open, Bones has authorized the release of several of Gotham’s deadliest criminals—Mad Hatter, Poison Ivy, Riddler, Tweedledum, and Tweedledee. These released Arkham inmates, along with a hired Bane, attack the city. The Bat-Family responds to the chaos. Angered at the fact that so many super-villains are being used by the DEO, Maggie Sawyer confronts Cameron Chase. Chase, using her DEO authority, responds by taking control of the GCPD. Meanwhile, Batman wails on Bane and injects a serum into his body that turns his Venom into a virulent toxin. Defeated and in pain, Bane reveals that Bones has set up the whole affair. Across town, Hawkfire busts into a DEO facility and breaks Beth out of captivity. While Batman and Batwoman fight each other, Bones, Chase, and a DEO squadron capture Hawkfire, Alice, and Jake’s military ops unit known as The Crows. Batwoman gets the jump on Bones and company by surprising them with a ruse where Jake wears the Batman costume. The real Batman, Nightwing, and Batgirl then take down the DEO guys. DEO Agent Asaf, on direct orders from the POTUS, takes out the rogue Bones by shooting him in the head, which puts him into a coma. Three weeks after Director Bones’ DEO assault on Batman and the Kane Family, Jake departs for a therapeutic overseas cruise with Beth in hopes of rehabilitating her at Roderick Kane’s old private island estate. For now, Alice is a villain no more. Chronologically, our next Alice-related item is Batwoman Vol. 2 #36-40, entitled “How in the Hell Did We Get Here?” (by Andreyko, Georges Jeanty, Karl Story, and Major, January-May 2015). Beth, seemingly fully-recovered, returns to Gotham, with hopes of turning over a brand new positive leaf. Becoming “Red Alice,” Beth meets up with her sister with the idea that they should become a crime-fighting duo. Unfortunately, Kate is going through some wild stuff at the moment. She’s is convinced that she’s been turned into a vampire! Red Alice doesn’t trust Kate’s new girlfriend Nocturna, clearly aware that the latter is playing her sis. Shortly thereafter, Batwoman and Red Alice patrol together as superheroes! They soon find themselves teaming up with the odd trio of Ragman, Clayface, and Jason Blood against the immortal sorceress Morgaine le Fey! Later, Red Alice exposes Nocturna for the villain that she is. In response, Nocturna meta-power manipulates Kate to attack her own sister. But Red Alice is smarter than that, showing Kate that she’s not actually a vampire—she’s simply Nicolas Cage in A Vampire’s Kiss. Nocturna has merely used her powers to make Kate think she’s a bloodsucker. Nocturna tries to pin a murder on Kate, but Red Alice saves her sis again by secretly recording a confession from Nocturna and sending it to the cops. Red Alice is a pretty damn good superhero (and detective)! Runs in the Wayne-Kane Family, I guess. After a warm embrace and a loving sisterly conversation the likes of which we really hadn’t gotten the chance to see prior to this issue, Ragman interrupts. No rest for the weary! Morgaine le Fey is in outer space and they’ve got to stop her.

This leads to Batwoman Vol. 2 #35 (by Andreyko, Jeanty, Story, Scott Hanna, Dexter Vines, and Major, December 2014)—out of order from a few issues prior—and the conclusion in Batwoman Annual #2 (by Andreyko, Jeanty, Yishan Li, Roberto Viacava, Ronan Cliquet, et al, June 2015). Batwoman and Red Alice join Etrigan, Ragman, and Clayface to become the superhero team of misfits known as “The Unknowns.” After rocketing into Earth’s atmosphere, they fight Morgaine le Fey and her demon army. Red Alice gets knocked-out but is saved by Ragman’s Suit of Souls, which only works because of all the evil deeds Red Alice has committed in the past. The Unknowns crash back down to Earth, but Morgaine le Fey has turned the entire planet into her own Medieval kingdom. While the rest of the heroes hide out and do recon, Red Alice wanders in the void realm that is within the Suit of Souls, coming face-to-face with evil souls that tempt her to stay with them forever. However, Red Alice proves that she’s really atoned for her sins. She truly wants to repent and be good. It is because of this that she is saved. Eventually, the Unknowns break Morgaine le Fey’s spell and return Gotham to normal.

Publication-wise, we also see Red Alice in the alternate universe story (i.e. non-canon) Batwoman: Futures End #1 (by Andreyko, Jason Masters, and Major, November 2014). In this Futures End timeline tale, Batwoman has become a legit vampire (as opposed to a fake one) and has gone insane, becoming violently murderous. Red Alice, having learned Batman’s ID, goes to Bruce and asks for help in bringing her sis to justice. Bruce gives Red Alice a sonic device that can stun Kate temporarily. Batwoman’s former Unknowns team of Red Alice, Clayface, Ragman, and Jason Blood/Etrigan then reunites and strikes against the vampire queen in Gotham. Seeing no other option, Red Alice uses Bruce’s sonic device and then nets her sis. Red Alice then reluctantly puts a stake through Batwoman’s heart, turning her into a pile of ash. Beth returns to canonicity in the New Age/Rebirth Era with Batwoman Vol. 3 #13-15 (“The Fall of the House of Kane”)—the most recent and currently ongoing arc by Bennett, Blanco, and Rauch (May-July 2018). It’s highly debatable and hard to tell whether or not Beth’s New 52 arcs—the DEO story and Red Alice story—are still canon in the Rebirth Era. Some lines of dialogue in “The Fall of the House of Kane” seem to imply that they aren’t canon while others hint at them still remaining canon. We simply don’t know. It’s also highly possible that they are canon, but highly altered versions of what they were before. All we do know for sure is that, when we pick up with Alice, she is in a Swiss sanatorium, where she’s been for quite some time. Kate, as her legal guardian, placed her there and has been keeping tabs on her long distance for a while. When Beth goes missing from the sanatorium, Batwoman believes she’s been kidnapped by the criminal organization known as The Many Arms of Death, which has been fighting Batwoman for a full year. Batwoman’s guess is correct. Beth, back in full crazy Alice mode thanks to having been heavily drugged, returns to Gotham as “The Mother of War”—The Many Arms of Death’s ultimate weapon to use against Batwoman and the entire city. Drifting in-and-out of her Alice persona, the Many Arms of Death lieutenants guide her toward evil. That evil manifests in the form of a dastardly plan to kill everyone in Gotham. With the backing of the Many Arms of Death, a confused Alice mockingly spreads a deadly plague-like disease across the city via swarms of bats. Batwoman knows she (herself) is both a carrier and immune to the disease (thanks to a recent encounter with Scarecrow at a Many Arms of Death bio-weapons lab), so she contacts Julia Pennyworth for help. While Julia preps an antivirus using samples of Batwoman’s blood and DNA, Batwoman flies a plane and uses a sonic-emitter to attract all the infected bats, luring them away from the city. As soon as Julia has whipped-up the antivirus, she crop-dusts it over Gotham in a mini-jet. Batwoman then eliminating any possible traces of the deadly disease with explosives. Meanwhile, Batman, having been contacted by Julia, arrives to confront Alice. And that’s the cliffhanger at the end of issue #15. Pretty good, no? The conclusion to “The Fall of the House of Kane” ends with Bennett, Blanco, and Rauch’s Batwoman Vol. 3 #16 (June 2018). Batman confronts both Alice and Batwoman atop the old Kane Industries Building. An explosive three-way-dance makes its way through the building. Batwoman eventually claims victory by playing a loud recording of a gun firing (which apparently screws with Batman’s head) and then trapping the Caped Crusader underneath a giant letter K. With Alice in a moment of confused calm, Batman reminds Batman that Beth is not just her sister, but his cousin as well. Crawling out from beneath the K, Batman accepts that he should help family. The Dark Knight stands-down and leaves Beth in the care of Batwoman, but tells the latter that she’ll have to retire from crimefighting if she ever messes-up again. Seemingly recovered from her insanity (for the moment, at least), Beth stumbles over to an emotional Batwoman, who embraces her and apologizes. This is a nice way to end the long saga of Alice, for the moment anyway. Alice has gone through so much as a character, it’s fitting to see her somewhat redeemed or, at the very least, acknowledged as something more than the usual super-evil (and one-dimensional) baddie. She’s acknowledged as a legit member of the Wayne-Kane family. Like Kate, she’s Bruce’s first cousin—and that means something. Hopefully, future writers will run with Bennett’s ball and treat Alice with similar respect, providing her with the help she needs from family and friends alike.