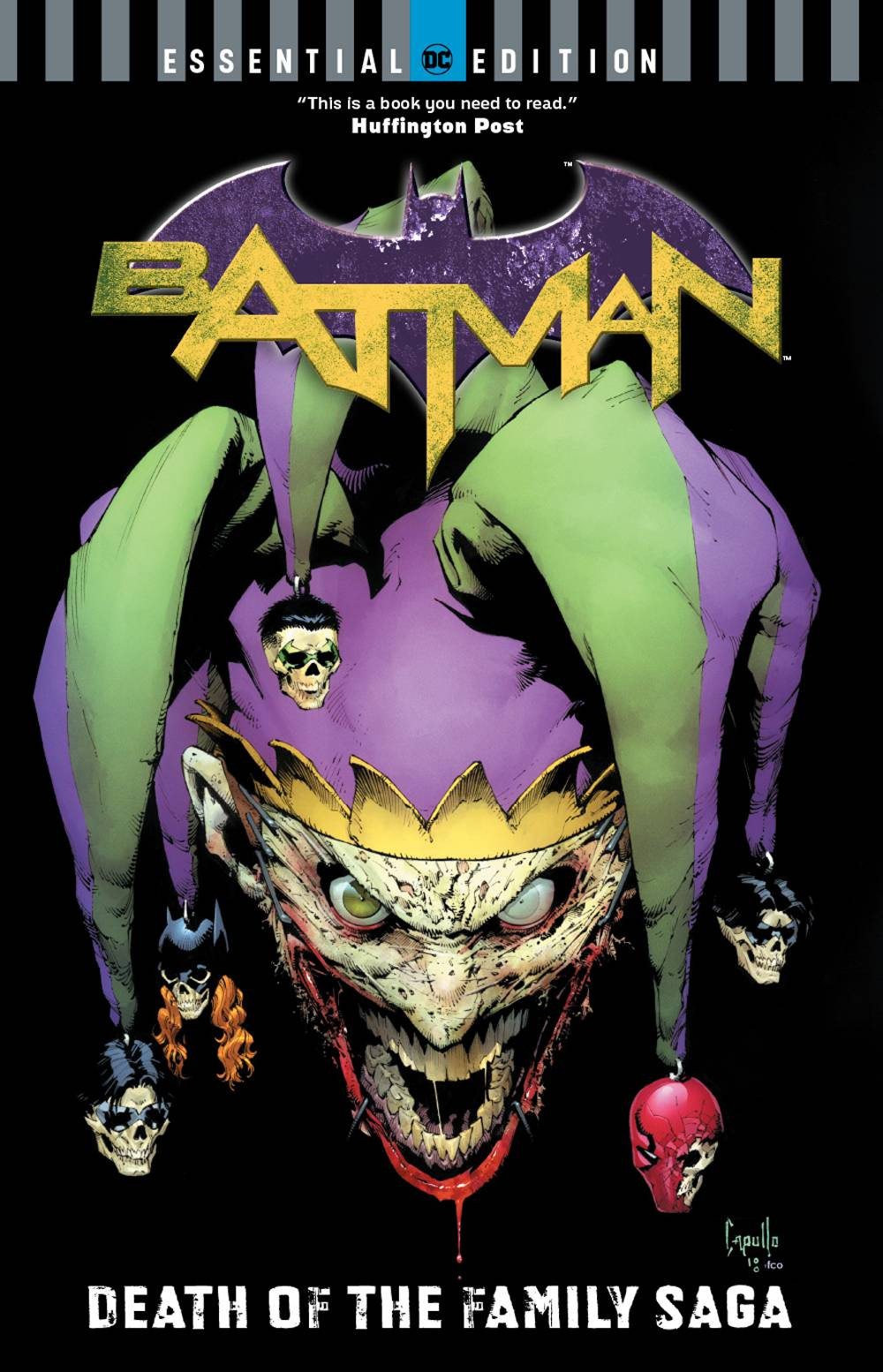 Editor’s Note: This time around we are reviewing Batman: Death of the Family Saga which collects the entire Death of the Family story from 2012-2013. A new trade paperback, with the new original cover shown to the left, was originally planned to release back in April (when this review was actually written up), but was resolicited for August. Now that August has rolled around, the new edition’s release has now been completely canceled. Rather than ignoring the review, we are posting it as the story deserves to be reviewed in some fashion even if the release of the saga edition has been put off indefinitely.

Synopsis (spoilers ahead): Batman #13-After a lengthy absence, the Joker returns to Gotham to retrieve his face, and after a killing spree, he tells Gordon that Batman has his calling card. News of his return spreads to the Bat-Family.  Joker kills people who are protecting the mayor. Multiple clues lead Batman to ACE Chemicals where Harley Quinn disguised as Red Hood tells Batman that Joker is going to take out the entire Bat-Family. Meanwhile, Joker attacks Alfred at Wayne Manor.

Batman #14-Batman returns home to find Alfred gone, but a cassette tape of Joker torturing Alfred, and that he’s planning a celebration. Batman asks Nightwing to help protect the rest of the family so they don’t act emotionally, while the family also wonders if Joker knows Batman’s identity. Joker traps Batman while recreating their first battle at the reservoir. He says he has a book with all the Bat-Family’s secrets, and that Batman will kill the Bat-Family within the next three days.

Batman #15-Batman escapes reservoir but is poisoned by Joker toxin. Batman is questioned by the Bat-Family about the chance of Joker knowing their identities. Batman says that he found Joker’s calling card in the Batcave many years ago and that while highly unlikely, he may have gotten in the cave. Batman uses his detective skills to find that Joker has been transforming Arkham Asylum into something for Batman. A place to come home to.

Batman #17-The entire Bat-Family is tied up around a table with hoods over their heads. If appears Joker has cut off all their faces, and they’re being served their faces for supper. Batman escapes his throne and saves the Bat-Family. Batman and Joker battle before Batman tells Joker that he knows who he is. Batman is electrically shocked by Joker as Joker falls down a waterfall. Batman sets up meetings to talk to each Bat-Family member which are then canceled by the family for various reasons.

Batgirl #14-Joker goons attack Barbara. After phone calls lead Batgirl to a skating rink, she realizes she’s been set up by her brother James. Joker asks Batgirl to marry him.

Batgirl #15-In a flashback, Joker antagonizes and threatens his doctor while also threatening the doctor’s daughter. Batgirl says she’ll marry Joker if he doesn’t kill her mom. Batgirl is then led to a church.

Nightwing #14-Joker breaks into Blackgate prison and asks Raya Vestri (former circus worker who tries to destroy the circus and kill Nightwing) if she’d like to hear a joke.

Nightwing #15-Nightwing wants to get the circus out of Gotham now that Joker is back in town. Raya, poisoned by Joker toxin, fights Nightwing. She dies from the toxin, but has a note written on her body that leads Nightwing to the amusement mile.

Nightwing #16-Nightwing battles circus workers under the influence of Joker toxin. Joker blows up the amusement park. A circus worker knocks out Nightwing and Joker takes him hostage (leading to the events in Batman #17).

Batman and Robin #15-Robin is frustrated that Batman wants him to monitor the Batcave and not go after Joker. Robin and his dog Titus investigate who abducted Alfred. Robin is sprayed with Joker toxin and comes face to face with Joker, and Joker says Robin and Batman will fight to the death.

Batman and Robin #16-Batman and Robin, who is under the influence of Joker toxin, battle each while locked in a cage. Robin escapes, but sees Joker kill Batman, who turns out to be a dojo master who owes Joker a favor.

Red Hood and the Outlaws #14-Jason Todd returns to Gotham and his girlfriend apparently overdoses while Jack Napier (Joker) antagonizes Jason on TV.

Red Hood and the Outlaws #15-Jason escapes from the police. Jason fights Joker. Joker knocks out Jason and drops him in a pit with Tim Drake (leading to the events in Teen Titans #16).

Teen Titans #16-Joker forces Jason Todd and Tim Drake fight to the death to see which one of their supposedly captured fathers will survive. They refuse to play by Joker’s rules and double team Joker. Jason shoots Joker but he actually shot a fake body that emits Joker toxin that knocks them out (leading to the events in Batman #17).

Analysis: This is the second so-called “event” of the New 52. The main title, Batman, carries the heavy load of the story, while the tie-in issues add to the main story. Events with tie-ins can be sometimes very good, and sometimes not good at all. For Death of the Family, the tie-ins are great. They actually matter to the story. They explain how each member of the Bat-Family was captured which leads to the conclusion of the story. They’re thought out well and use characters from each specific family members’ past to tell the story.

As far as the story goes, let’s start with the title. Any Batman fan will immediately recognize the similarities between the names of Death of the Family, and one of the most famous of all Batman stories, Death in the Family. In that story, Jason Todd’s Robin died at the hands of the Joker. So I naturally assumed that in Death of the Family that someone else would die. Not so fast….

Scott Snyder does a masterful job of crafting a multi-layered story with very real human emotions and feelings, including a symbolic death. Who was it that said comics were for kids?

The Joker returning to Gotham gets things rolling immediately. His lack of m.o. is enough to put the Bat-Family on high alert, but when he says he has a book with all the Bat-Families secrets and identities, it sets the family into a frenzy. How does this happen?  Thru chaos, fear, self-doubt, lack of trust, etc. By the end of the story we also have faith, trust, and strength of the family shown.

Batman struggles with a multitude of issues. Asking Nightwing to help him protect the rest of the family so they don’t act emotionally is what most parents would do. Protect their kids at all costs. He also does this out of fear or what Joker may do to the family. He insists that Joker couldn’t have gotten in the cave, but also can’t fully explain how Joker’s calling card got in the cave. His choice to not tell the family about the calling card for years immediately causes the family to worry whether Joker actually knows their identities which results in the Bat-Family being flooded with different emotions.

Batgirl and Red Hood show rage and seek retribution and revenge for the things Joker has done to them in the past. Damian shows defiance, then asks for forgiveness when Batman doesn’t want him involved and disobeys and ultimately get captured. Batman ultimately puts faith in the family saying they make him stronger.

While fans expecting another death in the Bat-Family going into this may have been disappointed, I think the symbolic death of the family makes it a much better story, with a more satisfying ending.

After finding out that Joker wasn’t serving the family their own faces for supper, and that his book of secrets had nothing in it, it shows how much anguish and further pain he has put the family in. The family’s reluctance and cancellation of their individual meetings with Batman show they need time to heal and deal with all the trauma that this has brought on, in their own ways.

While the events and grimness of this story are pure fiction, they mirror many of the same feelings that real families have. Parents want to protect their kids, kids want to show they are individuals and can handle themselves and be responsible. Outside factors can creep in and fester and cause feelings of self-doubt, lack of trust, chaos, or fear. But faith in family and trusting they will be there for you shows the unbreakable bond many families share. All these things make this a great story set within the Batman Universe.

This grim, dark story is the perfect showcase for Greg Capullo’s art, and he doesn’t disappoint at all. Greg is most definitely on the Mt. Rushmore of Batman artists.  The flies buzzing around Joker’s face are a perfect touch that shows how macabre this story really is.

Final Thoughts: This isn’t at all what I was expecting going into the story, but I ended up liking it a lot. A story of good versus evil, darkness, and light. A story that shows the many dynamics that make up a family, whether good or bad. Overall, a well-planned and constructed emotional story.