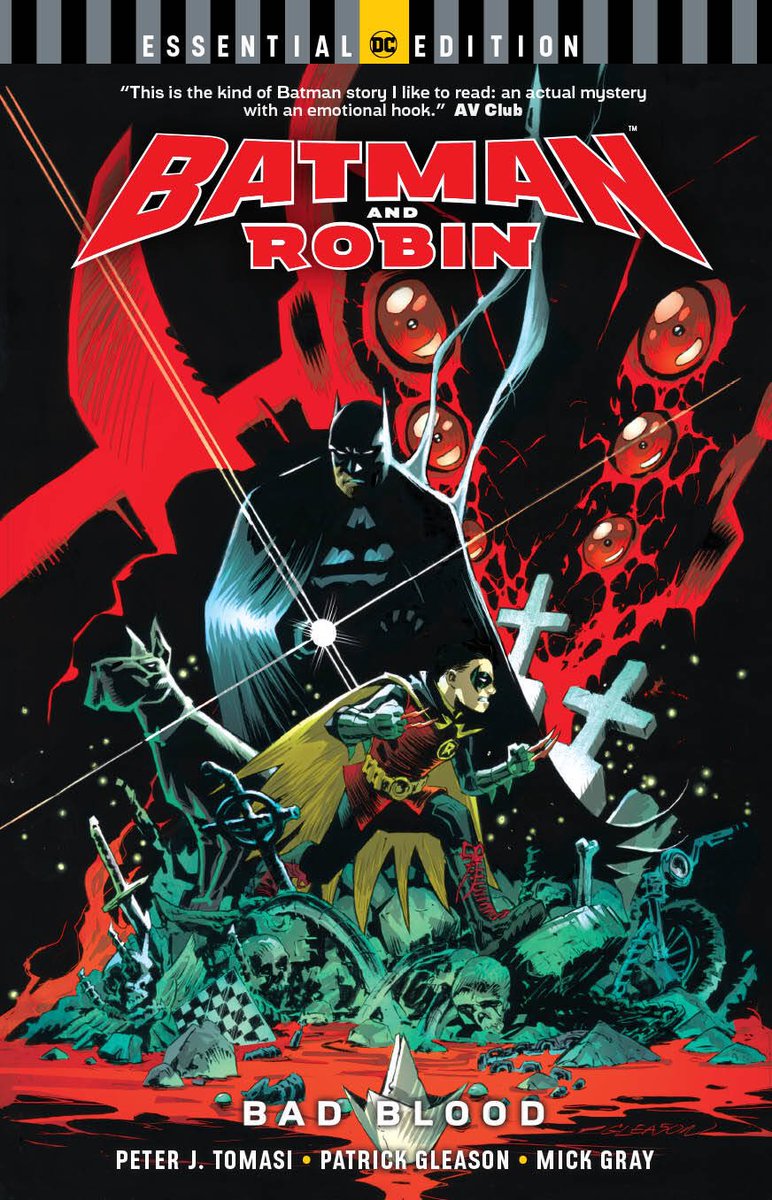 Editor’s Note: This time around we are reviewing Batman and Robin: Bad Blood as a new collected edition is releasing tomorrow in comic stores. This story was previously titled Batman and Robin: Born to Kill and has been previously collected. While not a review of the new collected edition itself, this is a review of the story as a whole rather than the individual issues as the site typically reviews. You can pre-order your copy of the new release by heading over to Amazon.

Synopsis (spoilers ahead): Batman and Robin starts with the Batman of Moscow being killed by the mysterious Nobody. He isn’t happy that Batman is expanding Batman Incorporated.

Heading to Gotham, Batman brings Robin to Crime Alley to talk about the future and let go of the past. Interrupted when they are alerted that Gotham University is being robbed. The Dynamic Duo stop the robbery with a few bumps from Robin. After dealing with some arms dealers the next night, Batman realizes his son is a natural born killer and is determined to help him.

Nobody reveals himself to Bruce as he is picking out a dog for his son. Nobody is Morgan Ducard who is from not very good part of Bruce’s past. Bruce puts the Manor on lockdown which annoys Damian who is playing chess with Alfred. This causes him to lose focus and fall short in trying to win. He storms off in a fury before going out to patrol.

Nobody confronts Robin and kills the muggers that he just crippled. After outsmarting and overpowering Batman and Robin, Nobody set them up for a film and a lecture about Batman’s mission. During his monologue, Alfred locates and distracts Nobody so Batman can free Robin and himself. After Nobody escapes, Bruce gives Damian a brief explanation of who Nobody is. The explanation doesn’t satisfy him so he storms off.

Nobody starts seducing Damian into joining him in his simple crusade of killing criminals instead of trusting in the system. After finding out Damian has left Batman hunts them both while telling the story of Nobody.

Nobody has Robin take out a human trafficking ring with him while playing mind games to “test” Damian. They bring the trafficking ring’s boss back to Nobody’s boat to get more information. Robin activates his GPS to alert Batman. Nobody starts torturing Damian while Batman listens driving him into an insane rage. Battling for Damian’s future and soul, Nobody and Batman fight until Batman gains the upper hand and holds Nobody under his acid bath until the fighting spirit has left Nobody. Nobody taunts Damian into killing him. Damian succumbs to the temptation and asks for forgiveness from his father.

After escaping and making it to Alfred for medical treatment, Bruce and Damian come to an understanding of Batman’s principles and how Damian’s dark side didn’t just come from his mother. While on bedrest for the night, Bruce, Damian, and Alfred play catch with Titus ending with Damian running under the Bat-signal to get back to work.

Analysis: This is the start of Batman and Robin in the New 52 written by Peter Tomasi and drawn by Patrick Gleason.

The character development for Damian by Tomasi is a great start. At first, we just had Damian being a snot-nosed, spoiled, know-it-all, killer ten-year-old. Now we have the start of a ten-year-old that has a father he can look up to and strive to be better, instead of a distant mother demanding perfection without no emotional input.

Nobody/Morgan Ducard’s character is an interesting flip of the coin to Batman. Instead of creating something for criminals to fear, Nobody is a ghost that just makes criminals disappear while sacrificing his soul to feed his need to kill. Nobody/Ducard’s origin is little lackluster having to give the character sufficient trauma with the drive for revenge against Batman for his daddy issues.

Bruce and Alfred’s relationship heads to a new level, as the younger man asks for advice on how to deal with a child like himself. Damian and Alfred’s relationship is particularly interesting as Damian feels he knows more than Alfred (as all children do). Alfred outsmarting Damian in chess and his slight of hands gives you a laugh at how anyone could think the man that raised Batman wouldn’t know how to trick anyone.

Patrick Gleason’s artwork has a excellent use of crosshatching and shading. Making the suits stiff like sprayed on armor when Batman and Robin are not in motion and yet completely fluid while in motion, is always a great idea. Gleason seems to make Robin’s action sequences quick and efficient to show off how much of a cold-blooded killer Damian is. Nobody’s design is inspired, like a spider with all the eyes while working his web to seduce Damian to the dark side of being a wet works operative. The Batmobile in these issues comes off as a tad Tron inspired which is neither here or there. It could be good with some more work or it could be horrid with the wrong coloring and inking.

Final Thoughts: I’m giving this delightful start for Batman and Robin four out of five for starting off with a new villain, but at the same time, not overstretching themselves while still making this story a founding stone in the New 52 relaunch! Enjoy!