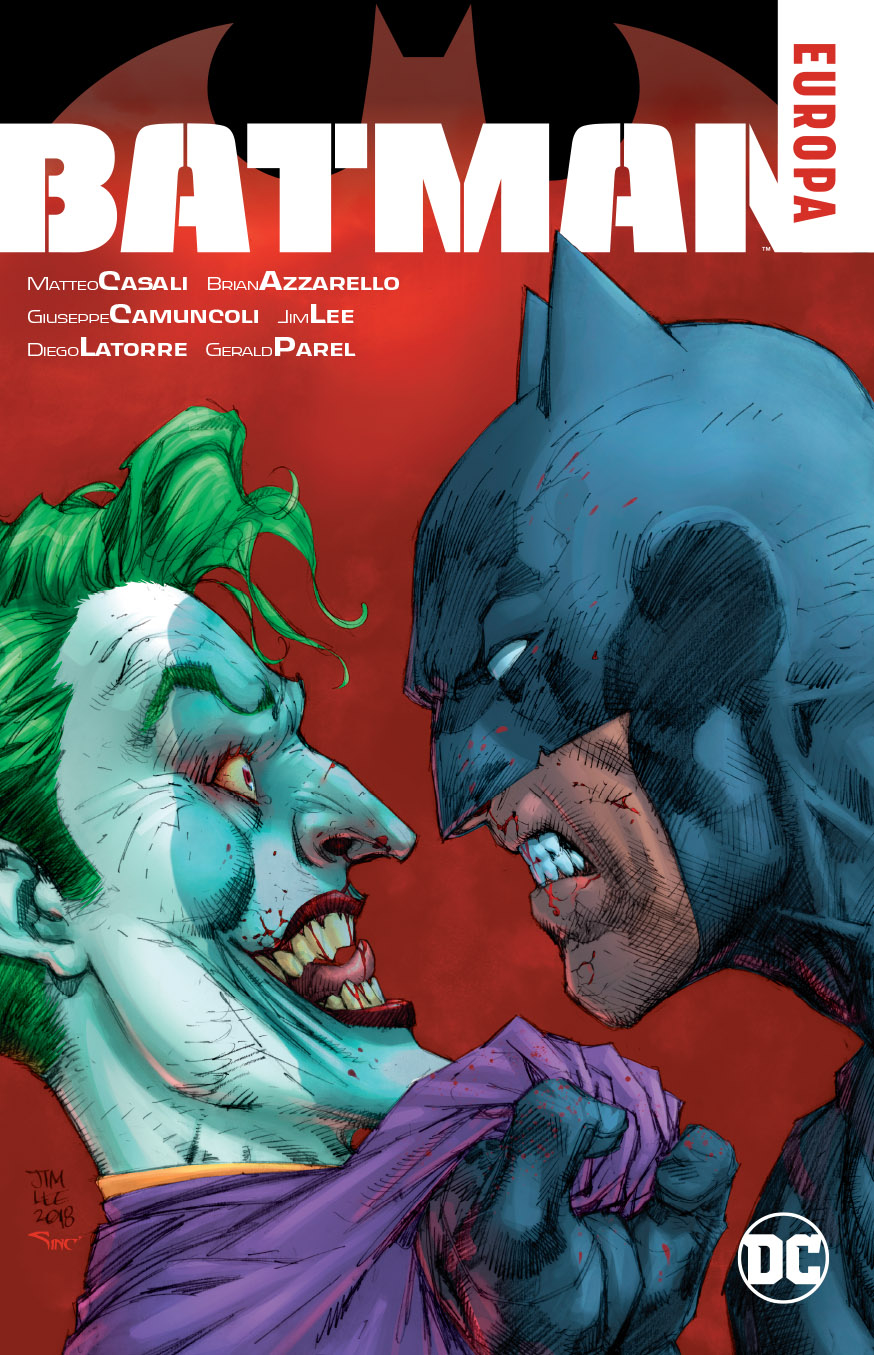 Editor’s Note: This time around we are reviewing Batman: Europa as a new collection in a trade paperback format is releasing tomorrow in comic stores. While not a review of the new edition itself, this is a review of the story as a whole rather than the individual issues as the site typically reviews. You may have some trouble finding a copy as despite being listed on Previews as releasing tomorrow, as the item is no longer appearing on DC’s site. However, you can pre-order your copy of the new release by heading over to Amazon.

Synopsis (spoilers ahead): Batman: Europa starts with Batman and Joker facing off presumably for the last time, the final fight. While reflecting on this, Batman flashes back to the beginning of this conflict as he fights Killer Croc noticing he is off his crime-fighting game. After taking Croc down, he makes his way back to the Batcave where Alfred informs him that the Batcomputer has been infected with the Colossus virus. Alfred makes the observation that maybe it isn’t just the computer that’s been infected. After discovering the virus is biological, Batman sets out to Berlin to find his enemy and the cure. While patrolling the city for information Batman finds a club filled with dead bodies with a certain smile and white skin. Now the chase is on as Batman hunts the Joker down and finds him terrorizing a young woman named Nina. After a brief struggle, Joker reveals that he too is infected with the Colossus virus. Nina reveals the I.S.P. from her employer was in Prague so Batman and Joker must team up to find their cure.

The second part of Batman: Europa starts with a brief flash of Batman fighting a firey machine at night. Flashing to two hours earlier, as Batman and Joker are in the sewers following Nina throughout Prague as they try to lure Nina’s employer out into the open. Batman and Joker talk/disagree while waiting for the trap to spring. Nina is ambushed by an army of wooden mechanical men. The odd couple/team deals with the wooden men while Nina is taken away by one wooden man. We are treated to a brief exchange between the wooden men controller (a possible metahuman?) and what we presume to be Nina’s employer. Batman and Joker find where Nina has been taken to and walk right into the waiting hands of a giant metal battle machine. As Batman fights the machine, Nina is whisked away by the possibly unknown metahuman and the mystery employer where the employer kills the mystery meta. As Batman starts to think he has been defeated by the machine, Joker breaks it from the inside and is freed. This gives Batman time to kick it right into the deep cold water of Prague. Now its off to chase after Nina and her employer to Paris, thanks to Batman secretly placing a tracker on Nina and knowing where she is.

The third part starts with Batman thinking that if it wasn’t for Gotham, he would have settled in Paris for his home base of operations. but that could just be the virus taking effect on his mind. As the bizarre team explores the city via the catacombs, Joker has a surprise for Batman. Jokers surprise is a cirque, le cirque du roi des clowns. The Joker’s fans and followers that will be used to hunt down Nina and the mystery employer. After hunting down a lead, they go to a man who was killed possibly eight hours before leading them to a confrontation of a monster that is half Batman and half Joker who has Nina. After a quick battle where Nina dies, the duo figures out that they need to travel to Rome.

The final part starts again with Batman and Joker facing off against each other possibly for the last time. Flashing back to earlier, Batman reflects on the history of Rome and gets frustrated with Joker thinking he was talking to the clown. As they argue they make their way toward the Colosseum to find dead security guards. They find the half Batman half Joker costume on fire inside the ancient building. The mastermind behind all of this is revealed as Bane and uses his venom to attack them both. As all three fight, Bane reveals he saw Joker kill Nina and that if either Batman or Joker dies the other one will too. Bane’s master plan is that each virus is the other’s cure. He then poses a moral question to Batman. Will he save himself and Joker knowing what the Joker will continue to do? This means that everything that Joker does, Batman is responsible for happening. Batman summons the bats of Rome to distract Bane and beats the steroid-pumped villain unconscious. As Batman ponders ridding the world of Joker, the Joker is too fast for the weakened Batman and knocks him down. He drinks some of Batman’s blood to survive and forces Batman to drink his own blood. Because what is The Joker without Batman? As they heal Batman says “Let’s have some fun.” and beats Joker in retribution for Joker killing Nina.

Analysis: So this story starts off with a good idea. What would Batman do after behind infected with a virus? Apparently, he would team up with the Joker and go down the road of “the enemy of my enemy is my friend.” While the interaction between Batman and Joker is entertaining and comical with some interesting character growth, the premise of this kind of story/team up is very overused, so much so that you can normally figure out what is coming at the end. Granted seeing it was Bane behind everything was a great twist, as I was actually expecting it to be Ra’s al Ghul because of all the world traveling and mystery. It seemed like it was another one of the tests to lure Batman into being his protege again. Bane giving Batman the moral dilemma of either dying with the Joker and ridding the world of the clown maniac or curing the both of them and cursing the world was very interesting to read, so bravo on that clever bit of writing. The half Batman and half Joker figure/creature seemed to only serve the purpose of confusing and taunting readers and a way to get rid of the Nina character just for the sake of getting rid of her. To me, that’s always a cheap cop out for a side character.

The artwork for the first two issues by Giuseppe Camuncoli and Jim Lee start the short series on a good foot. After a bit, you slowly see some fuzzing at the edges possibly because of the virus. That is a good effect in seeing how Batman is affected and slowing down from the virus. Issue three goes right off the rails into abstract art. While this artwork is extremely creative and imaginative it takes away from the form of the story. Honestly to me, it’s little difficult to tell what is happening on each page. Where something began or ended and if it wasn’t for the faces telling how many people were surrounding Batman, it would have been very difficult. Maybe it’s to show the deteriorating health of the duo and minds, but I really couldn’t understand it. Also again the half and half Batman Joker creature is a little random as it doesn’t really seem to serve a purpose other than to taunt Batman and Joker into going to Rome. Issue four gets reigned in little and you can see what’s happening and aren’t confused by the action or movement of characters. The portrayal of Bane is amazing seeing him pop out from normal human to super steroid fueled monster is always a thrill in the few pages we see it.

Final Thoughts: To wrap up, while the writing and artwork have there ups and downs, the general story is still worth reading and enjoying. This is a great graphic novel to bring along on a short plane ride to enjoy. Reading interactions between Batman and Joker, when they are forced to not fight each other, is always entertaining with Batman slowly going from straight man to a little loopy and Joker just being loopy as always.