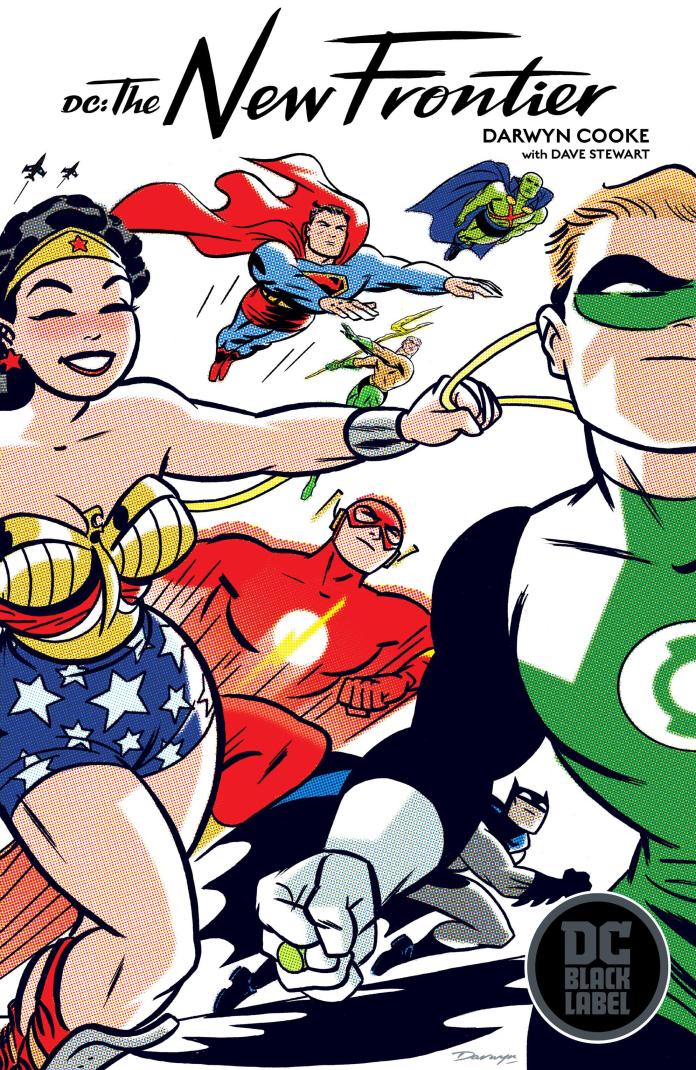 Editor’s Note: This time around we are reviewing DC: The New Frontier as a new collection in a trade paperback format as part of the DC Black Label imprint is releasing tomorrow in comic stores. While not a review of the new edition itself, this is a review of the story as a whole rather than the individual issues as the site typically reviews.  You can pre-order your copy of the new release by heading over to Amazon.

Synopsis (spoilers ahead): Due to the nature of the story and how it jumps all over the world at various times, this synopsis is a little different than normal. I will be featuring bullet points for the various chapters from throughout the story as it is easier to explain what happened.

-Somewhere in the Pacific in 1945, the military squad called The Losers die saving Col Richard Flagg on an island full of Dinosaurs.

-Spring 1948 at an Air Force base, a young Hal Jordan meets his hero and sets his sights on becoming a pilot.

-In 1952, the Mystery men and vigilantes are outlawed by the United States Government.

-In 1953, Hal Jordan is a pilot at the end of the Korean War and is forced to kill another soldier to survive.

-In 1955, Martian Manhunter arrives on earth by accident and adapts to human society.

-In 1957, J’onn now going by John works as a detective and meets the Batman. Together they take down a cult worshipping something called “The Centre”.

-The Flash stops Captain Cold from robbing at the after party of the fight.

-At Nellis Air Force base, Ace Morgan tells Hal Jordan about a test pilot job that he believes Hal might be interested in.

-Hal meets Carol Ferris and is given the job at Ferris Aircraft. He also meets Col. Flagg and starts his training.

-The Challengers of the Unknown meet at the site of there plane crash and decide to band together for good.

-In Tennessee, John Wilson survives a lynching and then makes a weapon. He changes his name to John Henry and becomes a vigilante who kills the men who killed his family.

-In New York City, Task Force X losses a man to a mission.

-Martian Manhunter meets with Batman again and is given the task of finding out what “The Centre” is.

-In Washington DC, Wonder Woman is given a Congressional Medal of Diplomatic Citizenship.

-Hal meets Faraday and is informed of that Ferris Aircraft’s real mission is going to Mars.

-After investigating “The Centre” Martian Manhunter is here on earth.

-In 1958, the Flash evades capture from the US government.

-In 1959, Hal and Carol are dating. Hal is also kicked off of the mission to Mars.

-Martian Manhunter meets Faraday and finds out about the mission to Mars.

-In Tennessee, John Henry is on the run from the Klan, but is caught and killed. His story is told across the country.

-On Paradise Island, Wonder Woman is visited by Superman where he is told a hard truth about America.

-The Flash announces he has quit being a hero.

-Batman is informed of “The Centre” before Martian Manhunter plans to head back to Mars.

-Martain Manhunter tries to board the Mars mission as it prepares to take off, but saves Faraday instead and misses his chance. Faraday then captures and questions him.

-The Mars mission goes bad and before Superman can save them, bith Col. Flagg and Karin die.

-After the funeral, Hal is given a Green Lantern ring.

-At Challenger Mountain, Lois Lane and Jimmy Olson join the Challengers on a mission.

-Superman meets with Batman and Robin in secret to be informed about the mystery of “The Centre.”

-On Paradise Island, something looms over the Amazons.

-At Nellis Air Force Base, Martian Manhunter and Faraday discuss the coming creature and how to defeat it.

-At Cape Canaveral, Superman saves the Challengers from a giant flying monster.

-In the Atlantic, Aquaman sends an army of marine animals to attack “The Centre.”

-Wonder Woman crashes at the recent monster site in Florida and seems to be injured.

-“The Centre” has been reveled and is on its way to America.

-In Central City, Barry Allen sees the recent reports and decides to help.

-At Nellis Airforce base, Martian Manhunter and Faraday head out to help in Florida along with every other hero in America.

-Wonder Woman tells Superman of the horror that is “The Centre” and that Superman must lead them all to victory.

-Superman steps up as a leader and organizes all the heroes to fight. He flies off to start the battle and is promptly shot into the ocean.

-On the moon, Dr. Fate, The Spectre, Phantom Stranger, Billy Batson, and Zatanna have decided not to help defeat “The Centre.”

-Adam Strange is freed from Arkham Asylum and recruits Ray Palmer to save the world.

-The heroes plan to shrink “The Centre” with Ray Palmer’s tech using the Flash as he runs around it to shrink it.

-As the battle begins, losses amongst the heroes occur.

-Inside “The Centre,” reality is warped around Hal’s team of ships. He is forced to abandon his ship and uses his Green Lantern ring to destroy “The Centre’s” mind and save his teammates.

-As Hal escapes, Flash circles “The Centre’s” body to shrink it just before it set to explode.

-Hal contains the blast and throws “The Centre” into space and saves Earth.

-At the celebration,  Aquaman brings Superman back to the mainland.

-All of the heroes form the Justice League. They choose to fight for what is right and to protect Earth.

Analysis: The New Frontier is one of those series that reminds you of how joyful and thought-provoking a comic book can be.

Darwyn Cooke’s artwork is on the level of classic forties to fifties science fiction and fantasy artwork. So lush and powerful, yet not overly complicated in its execution. His definition in characters and background remind me of Norman Rockwell’s slice of American life artwork. But don’t forget Dave Stewart skill at coloring Cooke’s artwork. If not for Stewart, Cooke’s artwork would still be amazing but would not have that amazing POP look to it. The colors make each page of art worthy of framing and are a perfect example of how cultured comic books can be.

Cooke’s writing in this story touches on such a wide spectrum of plot points you almost don’t need the bad guy at the end to feel like you’ve enjoyed a good book. A few points of the story that particularly stand out to me include Batman figuring out that John Jones is not human, but also figuring out his weakness and showing how much of a force to be reckoned with Batman really is.

Wonder Woman staring down Superman and showing how little he is compared to her. Her slow realization that the world of men will not listen to her, shows how even an Amazon warrior can’t put up with a government. Quick fun fact, Cooke is the first artist to depict Wonder Woman as taller than Superman in comic books. Add in the fear and government oversight during an era of McCarthyism and this really is the making of a true period piece. Last but not least, Hal Jordan discussing what could possibly be seen as PTSD for an era that would never admit such a thing could exist, is truly unique as well.

The letterer, Jared K. Fletcher, also deserves a good amount of credit for his perfect placement for this amazing story.

Overall, the story reminds me of a H.P. Lovecraft elder gods, hard-boiled, detective story mixed with a nineteen-fifties science fiction alien invasion movie. It has the cosmic horror, but with that splash of American, “we can overcome anything even space monsters with ray guns” sprit with the added secret government agency hunting down the good guys blend.

Final Thoughts: To sum it all up, this has everything you would want in an action-packed movie, but you get it in this amazing book instead. This is one of those books you can share with one of your naysayer friends who doesn’t believe that comic books can be insightful and clever. It holds up after many rereads and gets more and more enjoyable as a topic of discussion between friends. I’m giving this graphic novel a perfect score for the amazing artwork and story. You will not be disappointed with adding this book to your library.