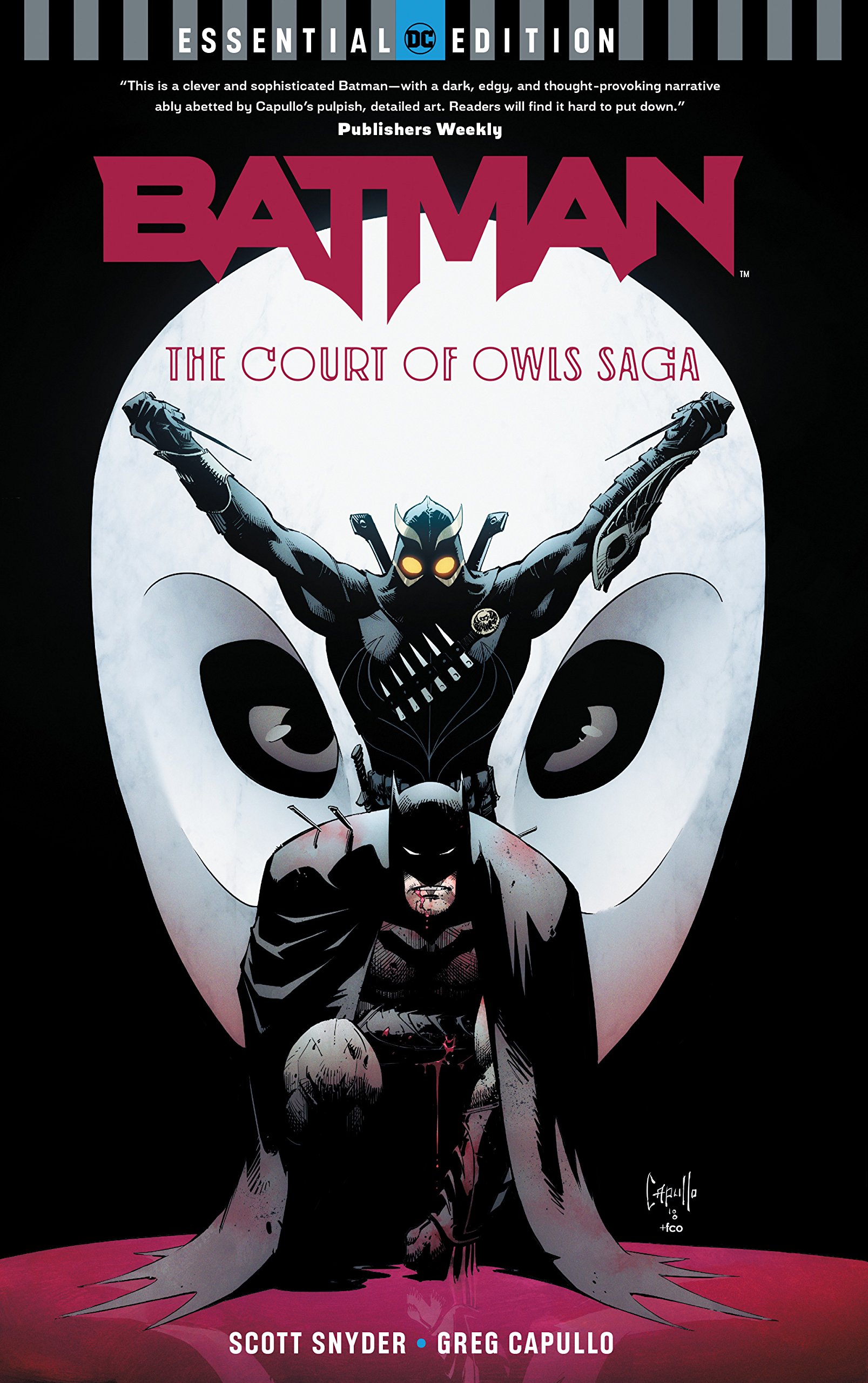 Editor’s Note: Years ago, TBU had a short-lived group of episodes as part of The Batman Universe Specials where we took an entire story and reviewed it at once rather than issue by issue. We wanted to bring this back in written form because there are always a ton of new trades and collected editions getting released all the time. So to kick this off, we are reviewing Batman: The Court of Owls as it is releasing tomorrow in comic stores as part of the DC Comics group of DC Essential Editions. While not a review of the collected edition itself, this is a review of the story as a whole rather than individual issues as the site has previously reviewed. You can pre-order your copy of the latest edition by heading over to Amazon.

Synopsis (spoilers ahead): The start of the New 52 Batman begins with the mystery of “Gotham is…?”. The Court of Owls has returned but Batman doesn’t believe in this old secret society claiming it to be just an old nursery rhyme. Dick Grayson’s DNA shows up on a body of a person that doesn’t exist and the web of the Court’s mystery begins.

After checking and clearing Nightwing of the murder, Bruce goes to meet the new Mayoral candidate Lincoln March on top of Wayne Tower. Instead, he meets the Court’s assassin, Talon, and is thrown off the tower in order to cover his secret identity. Now Batman is hot on the trail of the Court as he discovers they have a base in all of his family’s buildings on each nonexistent thirtieth floor. Digging deeper into the whereabouts of the Court, Batman searches the tunnels of Gotham and is attacked by Talon who throws him into the Court’s underground maze.

Eight days pass and Batman is being led around the maze by Talon and forced to drink drugged water. This causes him to hallucinate turning the Court into mutated Owl people. Coming to a realization, Batman is able to escape using equipment within the maze. Bringing the Talon with him into the freezing Gotham River, he makes it back to Alfred and the Batcave after being saved by a mystery woman in a garage. While in recovery Bruce shows Dick that he learned who the Talon really is. As a relative of Dick, this shocks him and also shows what his life could have been if not for Bruce. Across Gotham, the Court of Owls now has an army of Talons that they send out to destroy their enemies and make Gotham theirs again.

Moving into the Night of Owls, while reflecting on how little he knows about his city, Bruce and Alfred are alerted to intruders to Wayne Manor as the Talons have come for Wayne blood! Fighting his way back to the cave, Bruce is able to gain information for Alfred to crack while they are locked in the armory. Bruce dawns an armored Bat-suit capable of taking on that many Talons. Meanwhile, Alfred uncovers what the Court’s plan is for the night. They call for the Bat-Family and all allies come to Gotham’s aid to defend and save the citizens on the Court’s hit list. When the fight starts going badly for Bruce, he uses a hidden trick and bats come to his rescue. This gives the opportunity to get to Gotham and help the rest of the Bat-Family.

The next morning Bruce is back to brooding and reflecting on current events. He discusses the mystery of his parents’ deaths and whether the Court could have been responsible. Right before Bruce is about to leave for a dinner with friends the puzzle pieces fall into place for him and he runs to the Batcave. Batman goes to the morgue to examine Lincoln March’s body only to find a note “follow me down the rabbit hole?”

Bruce goes to the Willowwood Home for Children after realizing the clues March gave him in a passing story from his childhood. March surprises Batman both by being alive and with a net! March then taunts and teases Bruce with his real identity claiming to be Bruce’s younger brother, Thomas Wayne Jr., abandoned by his family. March says the Court took him in and trained him to be the long-lost Wayne son before Bruce returned from his years in exile and training.

The Wayne brother puts on a high tech suit while telling his story to his supposed older brother. The suit is very Owlmanish though he never calls himself that. The ensuing battle drags Bruce from the children’s home to over the sky of Gotham ending at the currently under construction Wayne Tower where he narrowly defeats his “younger brother” by taking advantage of the explosions around them both.

We end with Bruce in recovery discussing everything that’s happened in the last few weeks involving the Court. His new enemy Lincoln March has disappeared and how unless Bruce gets a DNA sample he will not be able to prove March isn’t his younger brother although he is certain his parents would have told him and he firmly believes the Court brainwashed March into believing he was a Wayne. We end with Bruce claiming “I’ll always be watching.”

Analysis: The first story for DC’s 52 reboot series is a two-part story arc, which was a very bold move in my view when starting a beloved series like Batman. Having to commit to eleven issues could have spelled disaster. DC could have taken the easy out and started off with a single issue origin and gone from there. Instead, they decided to roll the dice believing in there fan base and it paid off. I don’t know about anyone else but I’m personally sick of constantly starting a series off with the origin, besides in passing mentions. When we treat readers as if they know common information or information that can be found very quickly the story can progress quickly and you get to enjoy the meat of the story better.

Bruce Wayne starts off with his cocky “I know and thought of everything” attitude. He can’t conceive of a possibility that he could be wrong with the Court of Owls being real. Batman being humbled by being confronted by an enemy he doesn’t know and that has been living in his world shows that you can devote yourself fully to anything and still be surprised by things.

Scott Snyder’s writing makes you think of Bruce and Dick as brothers. I love seeing that because that’s how I always thought of them towards each other. Reading the process of Bruce’s detective work is always an entertaining part instead of him doing the Sherlock Homes way of automatically knowing what anything is or where something is. I personally can’t stand the Bat-God writing where Batman always has outcome ready and defeats his enemy without much effort. Seeing Snyder’s Batman overpowered like this was very entertaining.

Now something that always bugs me about most some comic writing is the “magic hand waving”. When I say “magic hand waving” I mean they give a quick explanation of how something impossible happens like with the Talons healing and near immortality. The tooth with an unspecified amount of a special metal is enough to conduct a potion that brings dead Talons back to life with a near invisible healing power given enough time. Not trying to be picky, but it is one of those things. All in all, I enjoyed Snyder’s writing style and mystery style. He puts lots of hidden clues in his work where you can go back and look at other issues he has written of Batman and connect dots.

Now, this was my first real exposure to Greg Capullo’s art, having never read any of his Spawn issues. When we see Capullo’s Bruce everything is lighter and a little cleaner. There are no shades. Almost as if Capullo makes Bruce stand in the light at all times to show Batman as the darker half of Bruce Wayne. All of Capullo’s action is extremely fluid nothing seems blocky or chunky; your eye always moves smoothly from one panel to the other without difficulty. Now my favorite sequence of Capullo’s is the maze where Batman’s mind is slowly being toyed with for eight days. The attention to detail on the progression of pictures of the Court’s victims. The slow deterioration of Bruce’s sanity and his view of reality along with the panel shifting from normal to the side to upside-down was perfectly done. The giant demon/beast Batman fighting off the owl people was particularly amazing. That would be a holy grail original comic art page I think either in pencils or inked page. The only two problems I have with Capullo’s art is in the beginning with the first Joker image we see. It is too amateurish to me even though we learn its not really the Joker. The second problem I have is Thomas Wayne/Lincoln March/possible Owlman Suit it has no visible way for flight yet can still fly with hover tech. It seems to overpowered for such a small suit.

Final Thoughts: All in all I would say this story is an amazing way to reboot Batman for new readers and old fans.