Earlier this year, I, along with many other Bat-Fans I assume, had a Batman movie marathon leading up to the release of the new film. In these repeated viewings, I noticed some connections from the Tim Burton Batman movies to the Christopher Nolan Dark Knight trilogy. These connections might be pure coincidence or Nolan paying homage to Burton, but they are too good not to point out, which means it’s time for another edition of TBU Five Things!

#1) Joker at The Head of The Table 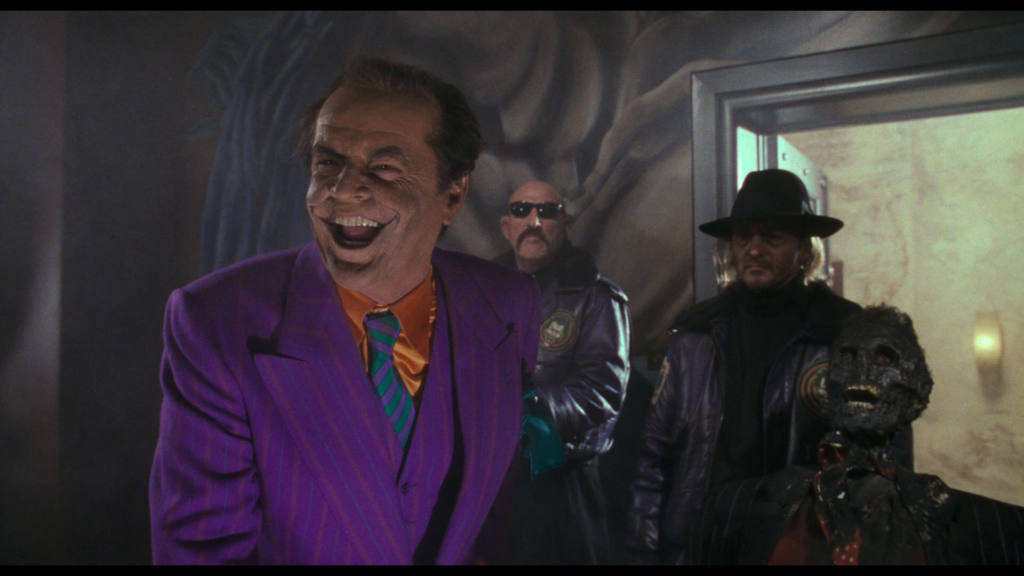 In Batman (1989), after Jack Napier came back from the dead and revealed himself as the Joker to kill Boss Carl Grissom, Joker meets with the mob criminals of Gotham. Joker has painted over his chalk-white skin and sits there with his big grin to let them know that he has taken over. After some pushback from one of the gang members, Joker offers a handshake and proceeds to burn the man alive with his joy buzzer.

In The Dark Knight our first full look at Heath Ledger’s Joker is in a similar scene where he meets with the heads of the Gotham crime families, and after his magic trick, lets the families know that Batman is the real problem and offers to kill Batman for half of their money.

The similarities in these scenes are striking. Each Joker kills someone in a way that only the Joker can, and it puts all mafia members on alert that crime in Gotham is changing. The man now running the show is wearing a purple suit with green hair and a ghastly grin.

#2): Batman Driving Straight at The Joker 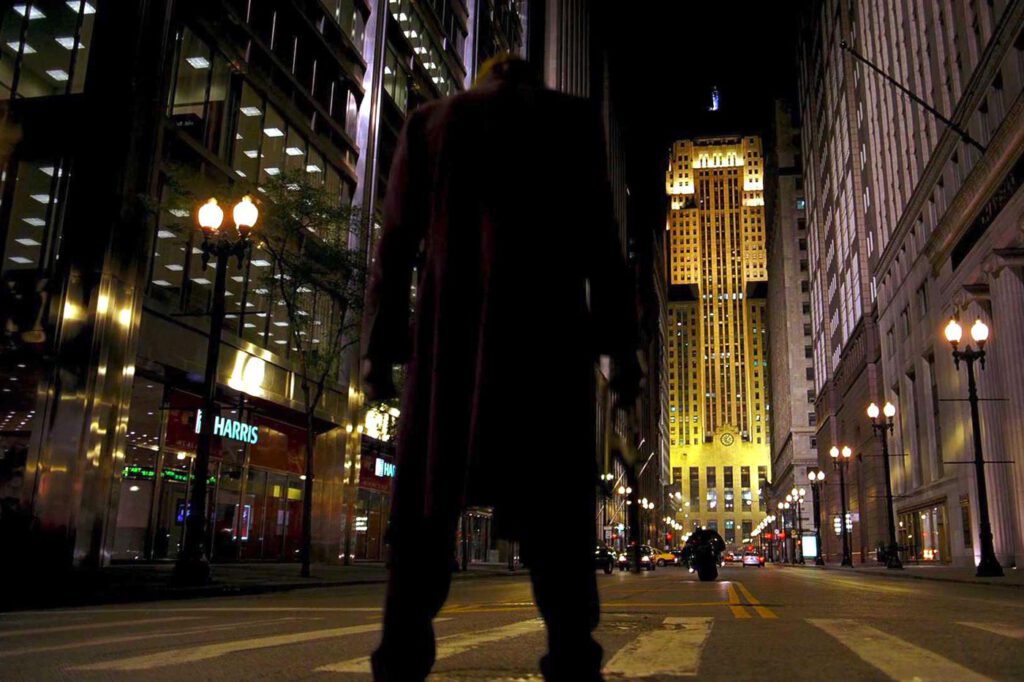 These scenes come at different points in the movie with the moment in Batman happening towards the end and the moment in The Dark Knight happening in the middle, but in a way, they are almost the same scene.

In 1989, after Batman stole Joker’s balloons with the Batwing (I can picture that plane silhouetted on the moon as I write this), Batman is heading straight for the Joker and is locked onto him. However, Joker is able to pull that amazingly comedic gun out and takes down the Batwing in one shot. How that one bullet was strong enough to take the Batwing we’ll never know.

In The Dark Knight, Batman is on the Batpod driving head-on at the Joker. It looks like Batman is going to run him over, and Joker wants it to happen. At this point in the movie, Joker has totally had Batman on the backfoot and has killed Jim Gordon (or so Batman thinks) so no one would have blamed him if he took out Joker then and there. Joker wants to get hit to prove that Batman isn’t the noble hero everyone thinks he is. At the last second, however, Batman pulls off and crashes his bike, choosing to not kill the Joker because he is the hero Gotham deserves.

#3): Race to the Batcave With Vicki Vale And Rachel Dawes 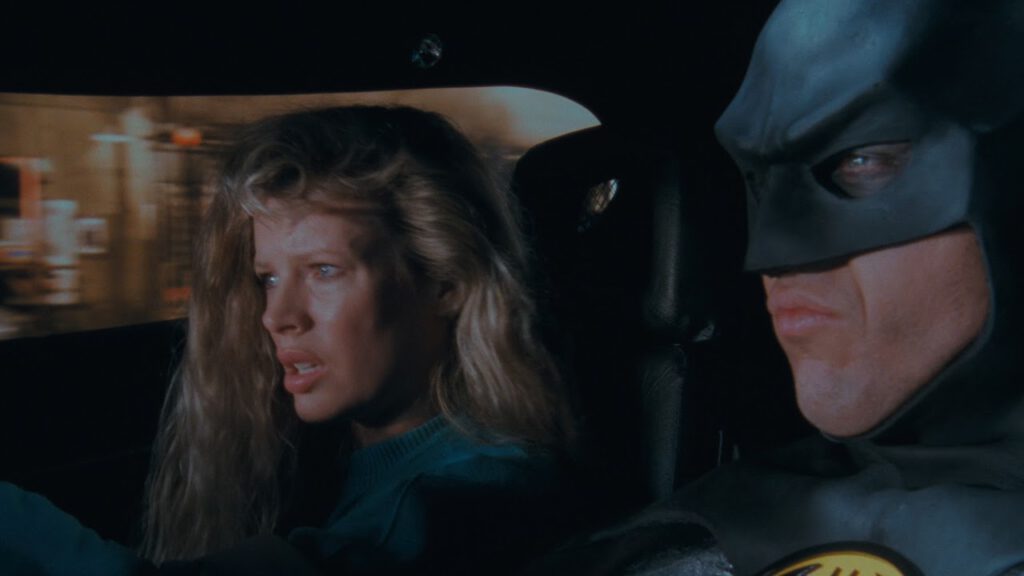 In this instance, both scenes are pretty much the same, but the stakes are very different. In Burton’s Batman, Batman saves Vicki Vale from the Joker at the art museum and takes off through the city to escape Joker’s henchmen. Batman takes Vicki to the Batcave and gives her information on how Joker is poisoning the citizens of Gotham.

In Batman Begins, Rachel Dawes is poisoned by Scarecrow, and the antidote is in the Batcave. After escaping Scarecrow, Batman unleashes the full power of the Tumbler while escaping the police. Batman is able to make it back to the Batcave to save Rachel and give her the antidote to give to Gordon.

In each scene, we see the Batmobile do things we haven’t seen from previous Batmobiles. The ‘89 Batmobile (my personal favorite) could shoot out a grappling hook, so he can take tight turns while going at a high speed. That car could also shield itself with a command from Batman. It was sort of like a fancy LoJack. The Tumbler had a camouflage mode on it and, of course, COULD FLY ON ROOFTOPS! This seems like one of many direct connections of the Batman movies from Burton to Nolan.

#4): The Batmobile Turning Into Another Vehicle 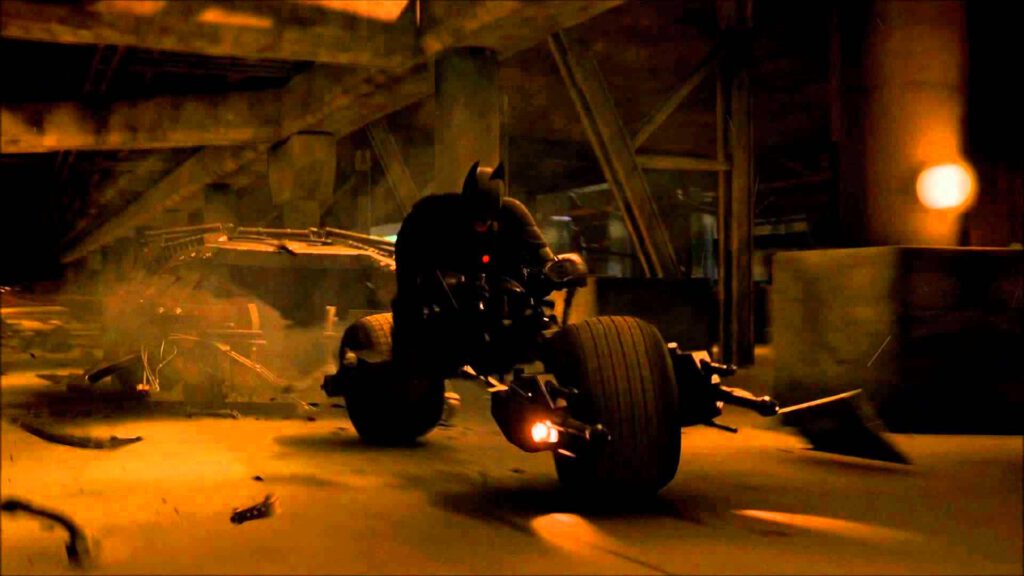 This is the only point on the list that involves Batman Returns. In Batman Returns, Penguin takes control of the Batmobile in an attempt to make Batman look like he’s turned on the people of Gotham. Batman takes back control of the car but not before the GCPD has started chasing after him. In order to escape, Batman ends up turning his car into a missile of some sort after shedding its wings of it.

Before he goes head-on at the Joker in The Dark Knight, Batman uses the Tumbler to save Harvey Dent from being blown up. The Tumbler has taken too much damage, but Batman is able to transform the driver-side wheels into a bike. The Batpod is born, and as Batman rides off, the rest of the car self-destructs.

It’s interesting in that this is the last time we see each Batman with this iteration of the famous Batmobile. Obviously, he had a new car in Batman Forever, but in The Dark Knight Rises, Batman only had the Batpod and Christopher Nolan’s version of the Batwing. 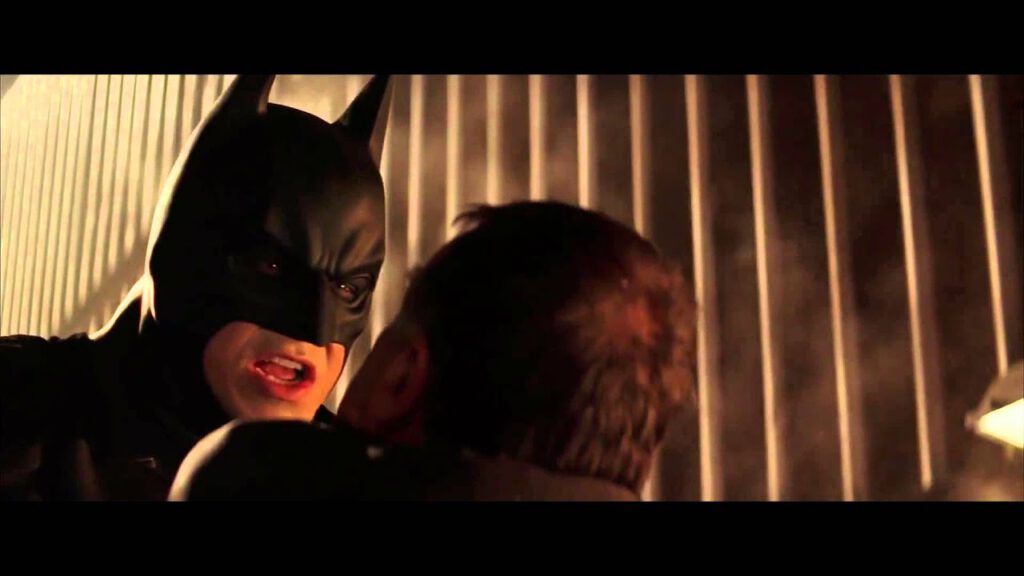 Save the best for the last right?

Each scene is the capper of seeing a new Batman on screen. Michael Keaton says the famous line after he takes out a couple of common criminals. He wants the thug to “tell everyone about him” and spread the message that Batman is real and he is protecting Gotham City.

Christian Bale had a bit more to do before he announced himself. He took out Carmine Falcone’s drug deal down at the docks by moving quickly and taking out all the henchmen. Then, he pulled Falcone out of the car as we heard his gruff, Bat voice for the first time.

Each scene shows that Batman almost has a supernatural element to him that allows him to scare the bad guys he fights. In Batman ‘89, he was shot and got back up before he kicked a man through a door. In Batman Begins, Batman is moving so fast that we don’t get a clear view of him until he rips Falcone out of the roof of the car.

With a character that has been around as long as Batman, there is bound to be some overlap in scenes and moments. These Batman movie connections could be coincidences, but they do seem like lifts and homages from Nolan to Tim Burton. I’m sure Matt Reeves will have more homages and connections in future Batman movies. Until then, I’m still waiting on Robert Pattinson (and Ben Affleck for that matter) to say “I’m Batman.”