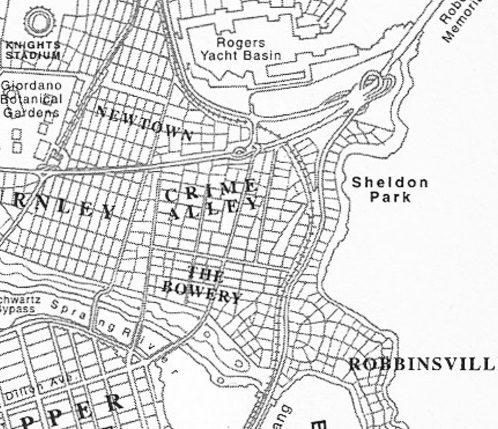 In the history of our Caped Crusader’s crusade against crime, no location has been more significant than Crime Alley. A popular misconception is that Crime Alley is named after the specific alleyway that Bruce’s parents went down. In truth, Crime Alley is an entire district of Gotham.

But how did an entire district of Gotham become known as “Crime Alley”? That’s not a very nice name to call an area of your city. Well, the origin of Crime Alley begins in 1892 with the construction of the Robert Kane Bridge. In Scott Snyder’s story “Batman: Gates of Gotham”, we learn about the creation of a series of large bridges extending from the island of Gotham. Before this, I don’t know, I guess Gothamites would get to the city by boat.

In the book, we learn that in 1881, Alan Wayne commissioned the Gates Brothers for the construction of three bridges in Gotham to help make business run better and to better shape the growth of Gotham in his favor, he organized this funding with the help of the Cobblepot and the Elliot families. By 1892, a fourth bridge was being constructed, but Elliot worried that by connecting the bridge directly to Wayne County, it would give Alan Wayne too much power over Gotham. He proposed they bring in Cameron Kane, the current head of the Kane family who owned the neighboring Kane County. Kane County was apparently closer to Gotham and easier to be built. After some tragedies in the story, the bridge was ultimately built in Kane County, much to Cobblepot’s disapproval.

But why did Cobblepot care about Kane County being connected to Gotham? Was he good friends with Alan Wayne? And what does this have to do with Crime Alley?

Well, for starters, what would eventually become Crime Alley connects directly to the Robert Kane Bridge, the same bridge that connects Gotham to Kane County. And second, Cobblepot was currently Mayor of Gotham, and he was worried that introducing Gotham to all the gamblers and criminals of Kane County to Gotham would hurt his chances of being re-elected.

So Kane County had a lot of criminals, and when they moved into Gotham, the closest neighborhood was where they settled in, with it becoming known as Crime Alley, or “The Criminal’s Alley”. So that wraps things up right? Not exactly. If it was all I had to say on this matter, it wouldn’t be worth talking about in an editorial. I’d just write a review of Gates of Gotham and tell you to read it. Which you should because it’s a great book, especially if you’re a lore-junkie like myself.

So what other piece of juicy info do I have. There are two other important bits of information that were not covered in Gates. 1. The Kane’s are a Jewish Family. 2. There’s a particular bit of history happening at this exact moment in time. a great migration of Eastern European Jewish families.

At this time, large numbers of Jewish cities where being uprooted by the Czar’s change in policy regarding the tolerance of the Jewish community. forcing them out of Russia and into the west. And they kept going west because there were so many of them and no one wanted to hold them all. They eventually made their way to America, land of opportunity, where the streets are paved in cheese.

This might not seem like a serious situation. Immigrants come to America all the time. We see, however, in Paul Johnson’s book “A History of the Jews” we learn that “Between 1880 and the start of World War I in 1914, about 2,000,000 Yiddish-speaking Ashkenazi Jews immigrated [to the US from Eastern Europe]”. Now, all these statistics here are real, this didn’t explicitly happen in DC Comics, but unless DC wants to tell us the Czar of Russia didn’t expel hundreds of thousands of Jewish citizens from his border, we can assume that everything happened the way it did here.

So now we have a bustling city, they just finished constructing three new bridges and commerce is booming. Businesses are flocking to Gotham. This is the perfect place for a displaced family just arriving in America to go to and find their new way. Many of these Jewish communities opened up tailors and other clothing stores, but around the same time, a number of Jewish groups founded investment banking firms, and combining that with a recent decline in farm prices, jump-started conspiracy theories about these Jewish banks, despite these prices being affected by commercial banks, not investment banks. These conspiracy theories hit struggling immigrants hard.

So now these families who just moved to America and traveled to Gotham are finding these doors closed to them. Where do they go? Well, to the only county in Gotham run by a fellow Jew. These antisemitic views could absolutely not escape the Kane families, especially since the conspiracy theories were centered on “rich Jewish bankers controlling the market”.

To summarize, Kane County, a county founded by a wealthy Jewish landowner showered with conspiracy theories about corruption and now full of recent immigrants. Add onto standard anti-immigrant rhetoric still being repeated over a hundred years to this day, and you have a city terrified of Jewish criminals coming over from Kane County to Gotham central. People living in the area soon to be called Crime Alley would flee. Wealthy people first, followed by White Flight programs that existed in real life in response to large African American communities immigrating to cities. Properties in this area were sold with loans offered by the city of Gotham, with property value dropping like an anvil as these new Jewish immigrants moved in. Followed soon by a massive spike in property value in neighboring counties forcing Jewish citizens to isolate only to this one neighborhood. A neighborhood now filled with what people were unjustly calling criminals, and now dubbing their neighborhood as “Crime Alley”, to further enforce discrimination against these individuals.

So there you have it. A possible explanation to the historical reason Crime Alley is named the way it is based on the history of antisemitism and Batman mythology. Any thoughts?