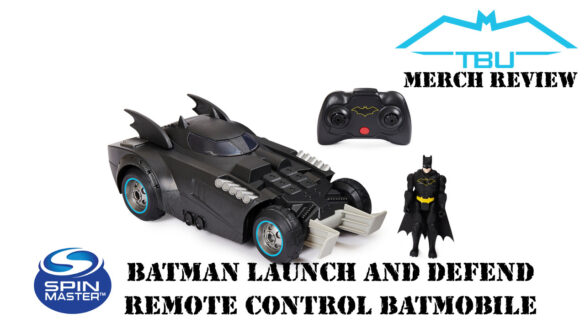 Spin Master continues to step up their game with items that parents were not able to find prior to them taking over the license. This week, we are taking a look at the Spin Master Launch and Defend Remote Control Batmobile. This item was released last year during the Spin Master’s first year of having the license for boys’ toys. This was one of the two Batmobiles they offered in 2020, with another one on its way, as announced in February.

While Mattel held the license for the boys’ action figure line, there were very few Batmobiles they released, much less one with remote control capabilities. This Batmobile not only was able to be controlled with the remote control, but it also comes with a figure as part of the four-inch line that allows for a special play action not seen very often. The figure can be put inside of the cockpit, and with the press of a button on the remote, the figure can be ejected from the Batmobile.

The figure finds its style and color scheme as a mix between the Batsuit found at the beginning of Tom King’s run on Batman and the Michael Keaton version of the character from Batman (1989). It has a cloth cape that does enough for looks, but also doesn’t get in the way of playing.

The Batmobile features a unique style with a battering ram at the front, which lends to the remote control features. It is perfect for taking out villains standing in the way, or even some of the larger figures released, including the Clayface figure, as part of a set we previously reviewed.

If you are interested in purchasing this item, consider buying them on Amazon using our affiliate link to help support TBU. You can find the Spin Master Batman Launch and Defend Remote Control Batmobile on Amazon now.