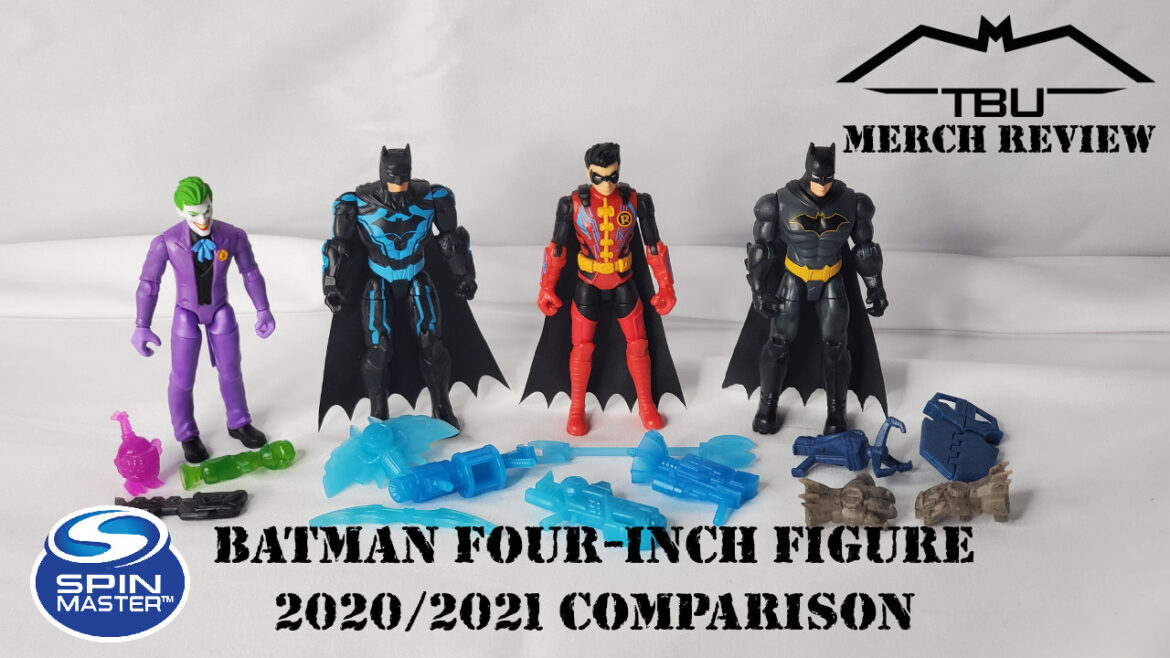 If it feels like we have been reviewing a lot of Spin Master items recently, it is easy to understand why. With only having the license for boys’ toys since the beginning of 2020, Spin Master has released a slew of figures, deluxe gear, playsets, and vehicles for the Batman line. Since we haven’t looked at the individual figures up to this point, today we take a look at the Spin Master four-inch Batman figures, review them, and compare the figures from 2020 and 2021.

The first year of the license being in the hands of Spin Master saw the addition of four-inch figures. What made these unique from the beginning was the inclusion of mystery accessories. These figures come packaged with three accessories that can vary in color. But every time there is a new wave or an exclusive figure released there are more variants available. We posted a breakdown of the new figures that are part of the first wave of 2021 recently.

The Joker figure is from the very first wave of figures released in 2020. The Batman figure that was labeled as a Target exclusive, we believe made its way to Target in mid-2020. The final two figures are the Bat-Tech Batman and Robin which released in early 2021. The main difference between the waves is the colors of the accessories. And when you compare the molds of the first year figures to the second year, it is obvious that they are not as simple as a repaint. Some of these figures are completely different molds with more details. Take a look at the video and see more of the differences.

It is worth pointing out that the line is also expanding outside of new single figures, with new vehicles and deluxe sets released this year as well. This is a bit of foreshadowing as we have more items to review in the future from the line. We do need to point out the Spin Master did provide the two Bat-Tech figures as well as the Joker figure for us to take a look at. The Target exclusive Batman figure, we picked up at our local Target.

If you are interested in purchasing this item, consider buying them on Amazon using our affiliate link to help support TBU. You can find the Spin Master Batman Four-Inch Figures on Amazon now.