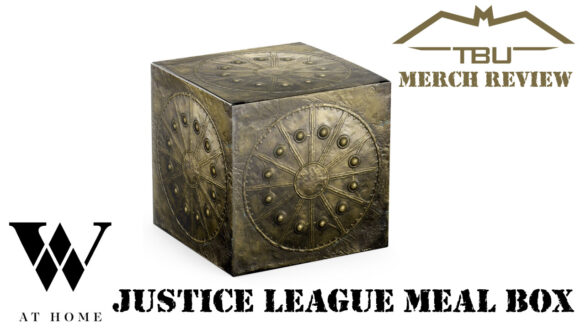 Today we are doing a review that up to this point, is our most extensive review yet. At the end of January, Wonderland at Home announced a specially themed meal box to release in celebration of Zack Snyder’s Justice League. The contents were revealed in advance and if you were willing to pay up, this unique meal could be yours in all of its Justice League glory. The latest TBU Merch Review takes a look at the Justice League meal box from Wonderland at Home.

To start off with, when this was announced, I was pretty excited. I have yet to dabble into the market of meal boxes, but the idea has always intrigued me. Having ingredients put together in advance with specific instructions on how to prepare the meal is something that I am extremely interested in. I juggle multiple hats and it leaves me with very little time to plan and prepare dinner. Over the past few years, I have been trying to eat better, while still maintaining the lack of time I have to accomplish the task makes meal boxes feel like they were created for someone like me.

When this new partnership with Wonderland Restaurants (based out of the UK) was announced with Warner Bros. and the first box was themed to feature Batman, I decided this was the time to try it out. It is worth mentioning that in order to get this box, you needed to order it ahead of time. And as of the time of this review posting, there are only a few weeks left for this limited run to be available. So let’s take an extensive look at the box with the packaging, the food and collectible items included, the meals prepared, and more.

While there were elements of the box that stood out as a fan of not only DC Comics, but of food, the price tag for the box is going to be the biggest hurdle for a normal fan interested in trying it out. While I look forward to more offerings from Wonderland, I hope the price can come down or the collectible nature of the items included goes up to warrant the price.

If you are interested in purchasing this item, as of this review posting, it is still available for a few more weeks. You can find the Zack Snyder’s Justice League meal box at Wonderland at Home now.