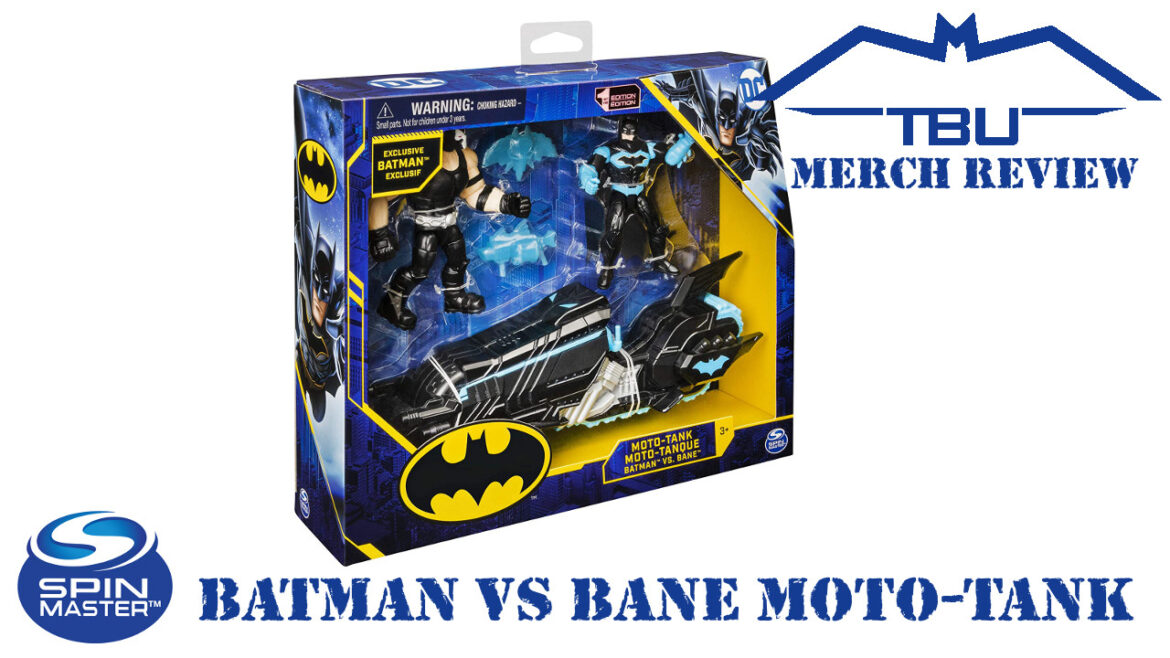 Last week, I was out of town. So that meant that the TBU Merch Review streak come to a halt. That wasn’t because of a lack of trying though as the latest item we are taking a look at is one that has been sitting here for a little bit of time just waiting for a review. Today we are taking a look at the Spin Master Batman Moto-Tank vs Bane set.

This isn’t the first vehicle we have taken a look at. We have looked at a number of Batmobiles over the past few months from the Spin Master line. However, this set is more in line with a set we previously reviewed last October with the Spin Master Batman Batcylce vs Clayface. Interestingly, this is actually the third bat vehicle, outside of the Batmobiles, that has released. Outside of the Batcycle, there was also a Bat-ATV released alongside a Copperhead figure. We haven’t seen that last set in stores, but with the new Bat-Tech theme, that means there is a new vehicle featuring the blue color scheme we have talked about a lot lately.

This new set comes with a different take on a motorcycle, as it is more of a tracked vehicle. It makes it different from past vehicles released, but keeps it around the same size to keep the price point the same as past smaller vehicle sets. The other thing that makes this set unique is that it includes the debut of Bane in the four-inch figure line. Bane previously released in the twelve-inch line from Spin Master, but this is the first time the character has been part of the standard four-inch line. Let’s take a look at the set.

It is worth mentioning that there is a variant of this set that has released as well. Walmart released a deluxe version of this set that features ten additional accessories in addition to the two accessories that came in the standard release. If you are interested in purchasing this item, consider buying them on Amazon using our affiliate link to help support TBU. You can find the Spin Master Batman Moto-Tank vs Bane set on Amazon now.