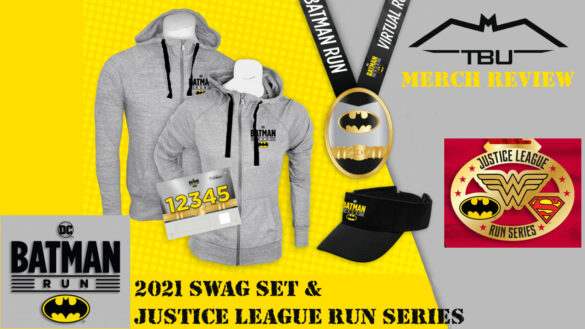 This week the TBU Merch Review dives into the swag set that was exclusive to the Batman Run 2021 series. We previously looked at the offerings for the 2020 set, but will this new set offer better merch than the previous years? What about the merch offered for the other run series featuring Wonder Woman and Superman? And what is the Justice League Run series?

In 2020, the Batman Run series went virtual. That meant that instead of having the races at a physical location, fans from around the world could participate in their own way. Whether it be running or walking everyone has a chance to participate. This also means that the swag set has to step up its game from previous years. This year the main set features a full zip hoodie, a Batman Run visor, a runner’s bib, a race finisher’s tape, and the exclusive Batman Virtual Run finisher’s medal. There was also an upgrade option that allowed you to a headband, compression sleeves, and utility pack.

What made this year different than the past years, is that now there are two other races happening at the same time featuring Superman and Wonder Woman. These races have taken place in the past, but the coordinators behind the event offered a new perk to those who signed up for all three races. By participating in all three races you unlock the Justice League Run series, which will automatically get you the very first Justice League Run series finisher’s medal. This perk is free of charge if you register for all three races.

Given the new perk, it seemed to be a good idea to participate in all three races. That said, we not only have the exclusive merch from the Batman Run, but also the Wonder Woman Run and the Superman Run along with the exclusive Justice League Run medal.

As of publishing, all three run series are still taking place. You can register for the events by heading over to the official website and registering for whichever races you are interested in. By participating in even just the Batman Run 2021 race you will score the exclusive swag.