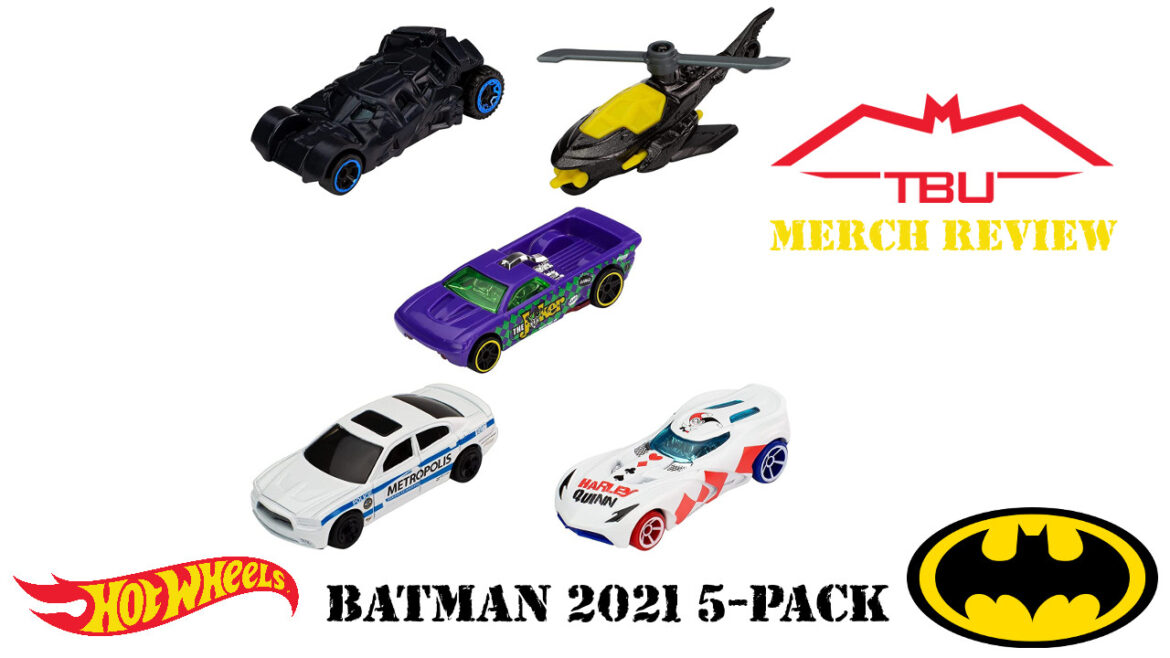 Today marks the beginning of December, a month that is notorious for lots of toys being bought. So we decided that this month we will try and bring you even more TBU Merch Reviews as we make our way through the stockpile of items we still have from 2021. Hot Wheels is our next focus with a new 5-pack featuring Batman for 2021.

Hot Wheels consistently releases a number of vehicles featuring the Batman Universe every year. This year is no different, but the release we are focusing on today just recently made its way to store shelves. The five-pack of vehicles may come across at first glance as reused vehicles from past years, but after further research, we have found that every vehicle is unique in its own way.

The first vehicle is the ’11 Dodge Charger R/T. This look first appeared in a Batman v Superman five-pack in 2016, but now has new rims. The Batcopter is next and features a plastic base not commonly seen with this mold. Then there is the Batmobile from The Dark Knight which features a unique paint with it being a matte dark blue color and chrome blue rims. Then there are two unique molds for Hot Wheels with the Bedlam and Velocita. The Bedlam features classic Joker decorations while the Velocita features what we believe to be the first appearance of the DC Super Hero Girls with Hot Wheels with Harley Quinn being present.

Hot Wheels are sometimes overlooked for being extremely common, but every year there are hundreds of new versions of vehicles created. But as mentioned earlier, Hot Wheels have been consistently featuring the Batman Universe more so than any other line of toys. Let’s take a look.

While this is just one offering from Hot Wheels, there are plenty of other vehicles featuring the Batman Universe. You can purchase this Hot Wheels 2021 Batman 5-pack and many other Batman items from Hot Wheels by heading over to Amazon and helping support TBU in the process. Out of the group of five vehicles, which one did you like the most?