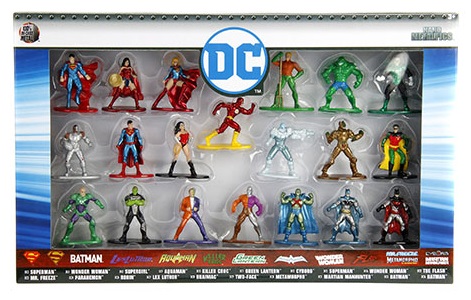 Just in time for the holidays, TBU was sent two new pieces of merchandise for us to share our thoughts about. These items come from Jada Toys. Jada Toys has been around since 1999, but if your collection is focused on items from The Batman Universe, you may not have heard of them until just recently. I, myself, discovered some of the items that they are releasing since they have a license for DC characters just over the last couple of years. The company itself got it’s start with die-cast vehicles and the success allowed them to branch off into other items over the past eighteen years.

One of those things that they started in 2016 is a line of metal die-cast figures. The line, called Nano Metalfigs, reminds me of the early 1990’s toy line of Mighty Max from Bluebird/Mattel with the main difference being that Jada’s line is made of real metal. That means they are more durable, but they are also larger than the Mighty Max figures. They have significant weight to each figure as well. Although we are focusing on the DC line, they also offer figures for Harry Potter, WWE, Street Fighter, Marvel Universe and Disney. And we all know that it is always great when you can have figures from different universes in the same size/type of figures. It just means you can play…..er, um….collect more of them.

Jada was kind enough to send over two items. The first is a twenty pack of figures from the DC Universe. If you are specifically looking for TBU characters, this set does not have a shortage of them as it includes two different versions of Batman, Two-Face, Mr. Freeze, Killer Croc and Robin. With over twenty-five percent of the set from The Batman Universe, it is a great way to start your collection. In addition to the twenty pack, Jada also offers a ten pack which has yet another version of Batman as well as five packs which almost always offers a TBU character. The other unique part of the line is that they also offer single packs for certain characters as well. Some of the figures that are available in the single packs include Commissioner Gordon, Joker, Harley Quinn as well as different versions of the characters based off of versions of the characters that have appeared in the animated shows, the classic Batman television series and the live action films. The best part of the single figures has to be the price, as each single pack is priced at $0.99 each. You may have to track them down at stores, but that is always half of the fun of collecting a line.

But the main reason this line had me excited was because of the playset that they offer for the figures. We all know that plenty of action figure lines release tons of figures and even vehicles, but up until recently, toy companies have not offered very many playsets for their figures due to the size needed not only for the figures to be used, but also the amount of shelf space that it takes up. Back in 2012, Playmates Toys offered a playset for their line of Teenage Mutant Ninja Turtles and it ended up being one of the hottest toys of the season. Toy companies have since taken more risks with playsets including Mattel releasing a Batcave playset for Batman v Superman last year as a Wal-Mart exclusive. This year, they changed the colors on various pieces and rebranded the set for Justice League available at more retailers.

Jada has an advantage over the other companies when it comes to the playset though. Due to the smaller size of the Nano Metalfigs, the playsets can be larger and have more details as well as feature things that other sets can’t, but stillnot take up as much space. The Nano Scene, as they call their playsets, features the Batcave with multiple moving elements as well as a light up floor which features the Batman symbol. The set is available at Wal-Mart according to their site, but there are plenty of other retailers online that offer it as well. The other item that Jada sent over was not the playset, but something unexpected. As part of the Nano Scene line, they offer a Light-Up Collectible Case to store the figures you collect from the line. The case features two different way to display it as you can either set it up on a table or the base stand folds down and it can also be wall mountable. Small LED lights light up the figures as they are stored in the case. And while it is meant for displaying Nano Metalfigs, the size of each compartment just so happens to fit a standard LEGO minifig as well. So it can be used for a variety of items to be displayed.

Overall, this line of collectibles is really great. With a variety of different figures, the detail presented in such a small item and the price being so reasonable, this is a great item for any collector to get into and start their own collection. Be sure to think of the single packs, available at stores nationwide, when thinking of stocking stuffers this holiday season.