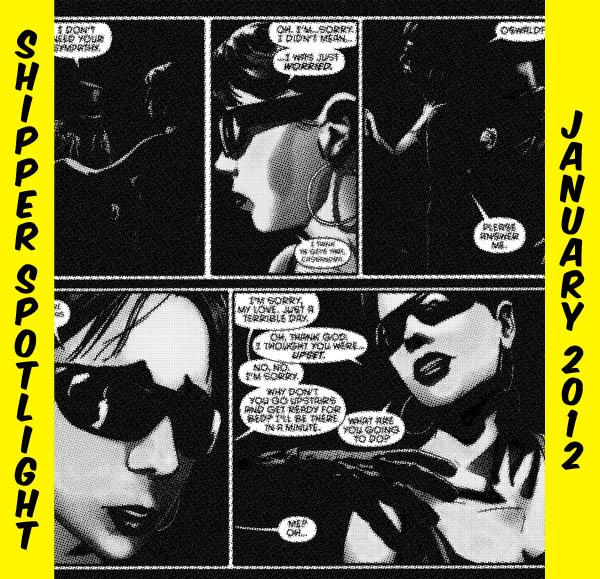 Shipper Spotlight is a monthly editorial by your very own Shipper-expert, Stella.  Each month I will take a look at the developing and new relationships (romantic, familial, platonic, and team-oriented) that appear in the Bat-books.  How are these relationships progressing?  Which are portrayed well?  Which should never exist?  What is my pick for SHIPPER OF THE MONTH?  Stay tuned each month for this serious look into the world of fictional relationships.

The Shippers as they stand now after the month of December:

BATGIRL: Babs currently only has a strange relationship with her roommate and a struggling restart with her recently returned mother.

BATMAN: THE DARK KNIGHT: Bruce really wants to pursue a relationship with Jai but life/Batman keeps getting in the way.

BATWOMAN: Kate Kane and Maggie Sawyer have a sweet and developing relationship.

BIRDS OF PREY: Dare I say it?  An actual team!

DETECTIVE COMICS: Bruce and Charlotte Rivers sitting in a cabin in Colorado.

NIGHTWING: Dick wants something more with Raya.  Raya is rather standoffish.  Babs gives a pep-talk to Raya.

PENGUIN: PAIN AND PREJUDICE: Penguin and Cassandra, could this be a match made in heaven?

*Denotes SHIPPER OF THE MONTH pick.

#5: Certainly the ‘huhbuhwhat?’ moment of the year (besides any issue of Batman: Odyssey) has been the strange/random appearance of Barbara Gordon, Sr.  Even though the previous issue ends with the red-head’s appearance, this issue does not begin with it.  Rather, Barbara flashes back to her rather uncomfortable first re-meeting with her mother after she reminisces about father Whittaker taking out his three sons with some loving bullets.  Loving parents and ghosts…of course this segues to Barbara, Sr.

The relationship, if we can call it that, does not start out well.  The words, tone, and facial expressions all show how open and vulnerable Barbara, Sr. is being, while Babs just wants nothing to do with her.  Her curt statements leave Babs portrayed as passive aggressive and hardened.  On the inside, it is obvious how painful this interaction is for her.  And why shouldn’t it be?  She has not seen her mother for a great while, her father was greatly hurt by her mother’s absence, and now Barbara just wants to come back and pick up like nothing has changed.

Barbara is naïve thinking that she can just come into her daughter’s life without there being any difficulty.  It is also a little difficult to imagine being friends with someone whom you cannot forgive or perhaps even trust.  This relationship, while I do not think that it should even exist in this book, does seem to reflect a realistic and strained absent mother/daughter relationship.  If this relationship is able to retain its realistic feel, falter, and grow slowly, then it will be something worthwhile.  If we see mother/daughter bonding within the next few issues with no hint of the pain or friction that we have seen here, then I would cry foul.

We discover that Robin has left his father’s side and actually took Morgan up on his offer.  Robin is ready to fight without fear of crossing the ethical line and becomes the Damian we always knew he was born to be.  However much it hurts to see Damian go to the proverbial ‘Dark Side,’ this relationship really suits him.  Morgan has embraced the belief system that Damian was indoctrinated with as a young boy.  With him, Damian would be able to drop the façade and embrace his true self.  The loss of his cape is symbolic of this; symbolic of Damian shedding his life with Batman.  Damian seems to still be fighting this lifestyle change, though he protests more with words than actions.  When Morgan and Damian go to work on the human trafficking group, the images and silent actions are like a lethal ballet.  It occurs to me that this duo is like Slade and Robin on ‘Teen Titans.’  Where Morgan and Damian differ is that Damian is willing.  How willing he truly is depends upon whether he pulls the trigger or not.

In stark contrast stands the relationship of Bruce and Damian.  How ironic that Bruce is able to grow so much with Damian in absentia.  He discovers the macabre and telling drawings that Damian has been creating since he arrived.  Only then he realizes that he has not been listening and is determined to get his son back.  Bruce truly becomes a father in this issue, though it will not matter if he does not make the necessary changes when Damian comes back into his life.  The sadness and desperation that Bruce feels in this issue is truly gripping and makes me hope for a positive resolution.

#5: I had already stated my belief that there was going to be some sort of relationship develop between Kia and David…did you mark my words?  This issue certainly shows no romantic progression between the two, but at least we get to see that David fumbles when it comes to interactions with females!

As David and Kia discuss her survival of the butchering of Massacre inside the police station, David tries to comfort her by saying,

“You have nothing to feel ashamed about. There’s no sin in survival.  And I believe he spared you simply because you’re a woman.”

Oh no he didn’t!  This obviously creates some friction between the two.  Whether or not this will continue has yet to be seen.  If David continues along this path, it may be a while before anything romantic happens between the two characters.

#5: The team has not progressed much since the previous issue, but the conversations and fight-choreography that occurs between them makes it seem as if they have been together for longer than they actually have been.  They trust each other, and isn’t that what every team needs?  Trust?  Will the Birds survive Ivy’s shady deal or Ev’s belief that Dinah set her up?  And speaking of Ev, who is June?  Friend?  Lover?  Sister?  This will certainly be something that we should keep track of.

Finally, it is important for a team leader to work well with all of her teammates, both individually and all together.  Dinah’s relationship with Babs is unclear.  Babs obviously has a problem working with ‘heroes’ who may tiptoe along the border between legal and illegal.  We see a hostile relationship and an easy one, depending on which Batgirl is present.  The relationship between Dinah and Babs has always been a personal favorite of mine, so I hope it progresses beyond this confusing dichotomy.

There are some great scenes with Dinah and Katana in this issue.  I really see Katana as representative of other members of the team.  How does Dinah relate to them?  How can she be both a friend and a leader?  The sparring scene strikes an emotional chord with me, especially to hear of Dinah’s loneliness.  We see that the team can serve Dinah just as much as Dinah can serve them.  Serve not only as something with which to fight crime, but as a family.

#5: When we last left Dick and Raya…there was not really a ‘Dick and Raya.’  Dick wants to pursue an actual relationship while Raya is uneasy about it.  Raya nearly knocked on his door but ended up walking away.  In this issue, Raya continues to avoid Dick as if he has the plague.  Unfortunately, as department head Raya must talk to Dick.  While the conversation starts off awkward and forced, Raya ends up giving in to Dick’s charm.

It seems like Raya and Dick may have a chance, if only they get over their issues.  It DID seem that way, until we see Raya and Raymond (aka Saiko) kiss in the end.  It is frustrating to think about all we readers had to go through in reading the progression between Raya and Dick, and now this relationship (and all the pain we experienced) was for naught.  What exactly was the point of this?  Once Saiko is defeated, will we/Dick be expected to forgive Raya and accept her once again?  Is Raya worth it?  I guess we will wait and see.

#4: What do Penguin and the Fantastic Four’s Benjamin Grimm have in common?  They were both able to find love despite their appearance because of a blind partner!

The ‘love’ between Penguin and Cassandra is both touching and tragic.  Cassandra is worried for Oswald and he misinterprets this, replying harshly to her.  It seems that even though Oswald has found someone to care for, he is still somewhat hardened due to his lifetime of being mistreated.  But, when Cassandra backs off and feels hurt, Oswald quickly redoubles his effort to be a caring man and lover.  This is why I think this relationship to be tragic.  Penguin has potentially found someone to share his life, and while we would expect him to discard his life of crime, we ultimately know that this will cause a rift and something unfortunate to happen to Cassandra.

Cassandra may be blind, but is she naïve?  At the playhouse, she defends Oswald to Batman, explaining that she sees ‘different things.’  Losing one’s sense certainly heightens another.  Could Cassandra see something in Oswald that the world neglects to see?  Remember that Padme Skywalker continued to see good in Anakin, even on her deathbed.  This certainly came true in the end.  Could there be a chance for Oswald to be a ‘good’ person?  This love and faith that Cassandra shows is touching and makes me want to hope for a bright outcome.  This is the reason why this relationship is my choice for SHIPPER OF THE MONTH!

RED HOOD AND THE OUTLAWS:

#5: If you are not reading this comic, but have seen panels from the first issue, I bet you are expecting very specific things.  I am not sorry to disappoint you!

This issue contains perhaps the best characterization of Roy Harper that has been seen thus far.  He only shows concern for finding and helping Starfire.  Even though he admits to not knowing Kori well (except in the Biblical sense), he is so caring when he finds her, letting down his jerky-façade.  Even Kori calls him a ‘kind man’ and one who brought ‘light into a world that has not shown me much kindness.’  Roy continues with his newfound pathos and tells her that this group has found each other for a reason and that they are going to be fine.

This page, filled with emotional moments, actually makes you want to care for the characters involved and makes one actually think that a relationship based upon this level of compassion (rather than the type of compassion found on a beach) is worthwhile.  Of course, just as this thought enters the reader’s mind it quickly ends.  Starfire shuts Roy out after he tries to show compassion for her troubled past.  How can a relationship continue with this level of fluctuation?

#1 made the relationship purely physical, but this issue makes it clear how much we are meant to get invested in the relationship.  Is it worth the time or risk?  I guess we will have to wait and see!

That’s it for this month’s installment of Shipper Spotlight.  Where will the Shippers lie next month?  Who will be my next pick for Shipper of the Month?  Stay tuned next time to find out!