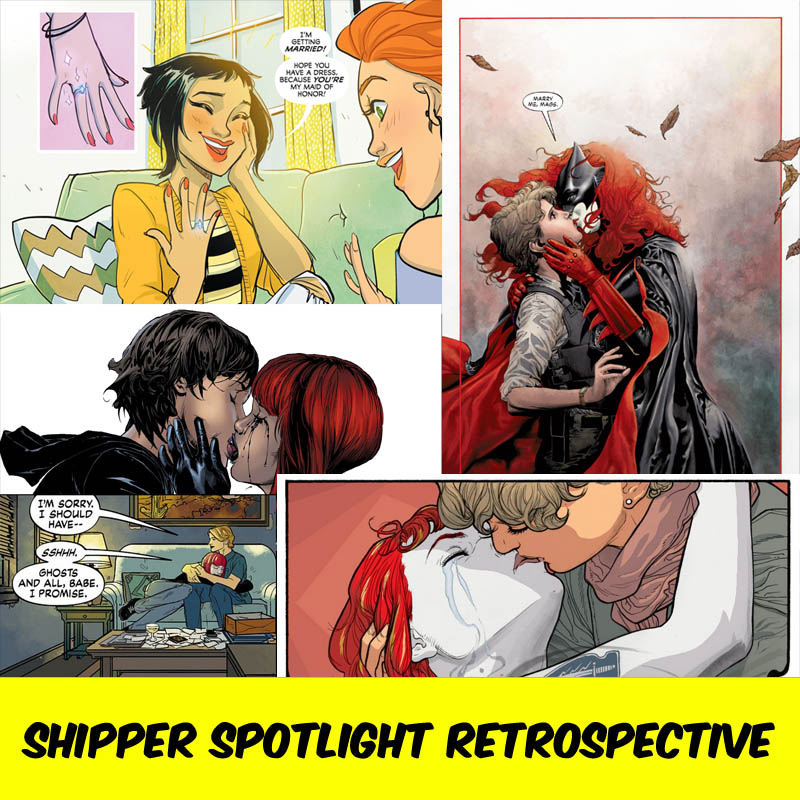 The ending of Batgirl #42 and the reappearance in the pages of DC Bombshells #1 of the Kate Kane/Maggie Sawyer relationship that we enjoyed in the Batwoman title got me first thinking about what I am going to discuss here. A myriad of emotions came to me at this time, including anger, resentment, sadness, and loss. I started this conversation in Batgirl to Oracle Episode 104, and I plan on continuing it here, but I cannot say when or how the conversation will end.

If you have ever read my Shipper Spotlight articles that began at the inception of the New52, I praised few relationships that were given to us throughout those early runs. In fact, the one relationship that I espoused as the best and most realistic relationship on page was Kate Kane and Maggie Sawyer. In a time when characters were having sex on rooftops with their costumes on (Catwoman), sex on a plane (Nightwing), and, perhaps worst of all, being hailed as a gay incarnation of a Golden Age superhero only to have his fiance killed in issue #3 (Earth 2), Kate and Maggie were diamonds in the rough. Their relationship grew organically, they were strong emotionally rather than physically on page, and they did not fall into bed the first time they met one another.

Unfortunately, the pair was not allowed to cement their relationship permanently with marriage vows. Let me point your attention to a quote from Dan Didio (courtesy of the Beat) after it was announced that Kate and Maggie would not be allowed to marry:

“Heroes shouldn’t have happy personal lives. They are committed to being that person and committed to defending others at the sacrifice of their own personal interests. That’s very important and something we reinforced. People in the Bat family, their personal lives basically suck. Dick Grayson, rest in peace—oops shouldn’t have said that,—Bruce Wayne, Tim Drake, Barbara Gordon and Kathy Kane. It’s wonderful that they try to establish personal lives, but it’s equally important that they set them aside. That is our mandate, that is our edict and that is our stand.”

So why am I upset now? Why am I bringing this up again? This is why: Kate and Maggie are the champions needed to lead the charge for DC Comics LGBT characters due to their well-developed and emotional relationship. The marriage of Alysia and Jo, supporting and frequently forgotten about characters, would not have the same impact nor the power to create a lasting change.

So, Alysia and Jo…who is that girl again? If you have not been reading Batgirl from the beginning (the Gail Simone beginning) you will have no idea who this character is. I, your friendly neighborhood Batgirl-fan, am here to chart the Alysia/Jo relationship with a side-by-side comparison to, and analysis with, the Kate/Maggie relationship.

The Kate/Maggie story does not end there, but I will stop my analysis there since Alysia/Jo are only at the point of the engagement and there is nothing more I can explore at this time.

Now within Didio’s quote above, the key words there are ‘heroes,’ and ‘Bat family,’ but do the same rules apply to minor characters associated with the Bat-family? Maggie falls in this category, but so does Alysia, who was once the roommate of Barbara Gordon! Also, if you recall, Gail Simone had some unfulfilled intentions to develop Alysia into a vigilante. Would she then be a member of the Bat-family? The time may be past to talk about this at length, but I also think it is irresponsible as a creator to put a group of characters in a ‘no happy zone.’ This is something that defines Bruce Wayne, perhaps, but the origin stories of the other characters are not Bruce’s origins. Pigeon-holing these characters also overshadows the stories that could be told with a dark veil that they cannot seem to escape. How can we enjoy our favorite characters if they keep encountering tragedy and dark storylines?

While a marriage between Alysia and Jo would certainly make an impact in DC Comics (though they are really behind Marvel’s marriage in Astonishing X-Men between Northstar and longtime boyfriend Kyle), the real tragedy is that Kate and Maggie do not get that honor after we have followed that couple for a long time and Kate was one of the only (if not the only) gay-leads to have her own comic (at the time). Unfortunately, Kate is just another casualty in Didio’s happiness-killing edict.

We have yet to see how this develops in the pages of Batgirl, but I will be reading closely, and I hope that you all will too! #KateandMaggie