TBU Versus: Volume 1-Batman vs. Superman Round One 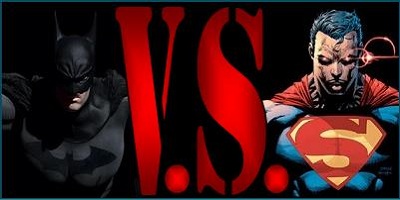 It's time for the first round of our first TBU Vs. match-up. Remember, the winner of this fight may not necessarily be the one who won in the comic that is being referenced. This round's fight takes place in an Elseworlds graphic novel titled, JSA: The LIberty Files, by Dan Jolley and artwork by Starman's Tony Harris, who has also worked on Ex Machina.

First let's cover some background. The Batman in this comic, being an Elseworlds and all, is thankfully Bruce Wayne. Superman, however, is not Clark Kent. In fact, though Clark Kent is his earth name, his Kryptonian name is not Kal-El. In this Elseworlds interpretation, Zod is our Superman. And yes, this counts. He is Kryptonian and has all of the same powers Clark/Kal would have except he is not held back by the moral code that Clark has learned from his parents and his upbringing. Also, the time period is during WWII. Bats is an operative for the government, and so are his partners (which he's reluctant to take on) whose aliases are the Clock and the Owl (Rex Tyler and Charles McNider, respectively). There are other Justice Society members re-imagined in this too. They all play a part in this fight. But we'll mention them later. They are a part of this fight assessment. Ok, let's get to it. Oh yeah, and if you guys haven’t read this series, SPOILER ALERT!

Batman's motivation in this is protecting the entire planet from a now rogue agent named Superman. As a member of the human race, and an agent for the United States government (in this interpretation), he takes responsibility for this by leading a team of other extraordinary agents to take down this rogue agent.

Zod/Superman's motivation is that the government is working on the Manhattan project and wishes to destroy this weapon as the radiation from it could harm him greatly. After this, he will attempt to take over the world. After all, he's Zod. What else would his motivation be?

By nature, Bats is a cautious fellow. And vigilance… well he is a vigilante. I'd say Bruce will always have this one in any fight. It keeps him on his toes.

Zod is aware of how powerful he is. He's not cautious. Even Clark Kent, is usually rather foolish, and brazen and rushes right into any situation. Zod is rarely prepared in this story for Bruce's plans.

Batman has several members of this Justice Society help him in this showdown. They include alternate versions of Red Tornado, Hawkman, and the Atom (the original Atom, not to be confused with Ray Palmer). Also, Huntress, Sandman, the Flash (Jay), Ted Knight (Starman), and Hourman. Also, Terry Sloane (Mr. Terrific) brings a serum to duplicate Supes’ powers!

Zod has no aid in this fight. It’s all Kryptonian might keeping him from being dominated by this exceptional team.

Batman is given a serum that duplicates Superman’s powers. However, it is only in its early stages and is incredibly toxic. Bruce takes it out of desperation, after witnessing several of his teammates murdered by the merciless Kryptonian. He nearly dies taking it. But it gives him an edge, nevertheless.

Zod is using his full array of Kryptonian abilities. His super-strength is his crutch, he only rarely displays his speed, except when he’s incredibly angry. His heat vision is his deadliest one, in my opinion as he vaporizes Hakwman with one look. Flight is the only other one he displays. But we all know that there are others.

Batman clearly is at a disadvantage. It’s an open environment, and he can’t fly.

Superman has the upper hand here. With his flight ability, he’s capable of just flying away when he tires of fighting the members of the Justice Society.

6) Is the story memorable?

For me, Batman’s leadership and ideas for attacking Zod are excellent for me in this story. He is the main character through each of the three books, and it’s his narration that we follow. Batman is incredibly memorable for me.

Zod is memorable, too. Honestly, this is a twist I didn’t see coming when I first read this book. I was unprepared for Zod being the Superman of this world, and capable of fooling the entire United States government. His backstory is exceptional. However, I’m giving this one to Bats. He makes or breaks this book, and Superman is more of a side character than a main one. Even Rex Tyler, Hourman, has a more vital role than he does.

Batman has plenty of time to prepare for this fight. Once he’s learned that Zod has gone rogue, he calls in the reinforcements and brings his allies for a final showdown versus Zod. Even his prior knowledge of Sloane’s serum comes in handy in this fight.

Zod has no real preparation for this fight. He is unaware of Sloane’s serum and is incredibly surprised by its effectiveness once Bruce uses his temporary abilities on him. Zod is caught unprepared for this fight.

Batman is the winner for round one. Get ready for our next matchup when I assess Mark Millar’s Red Son.