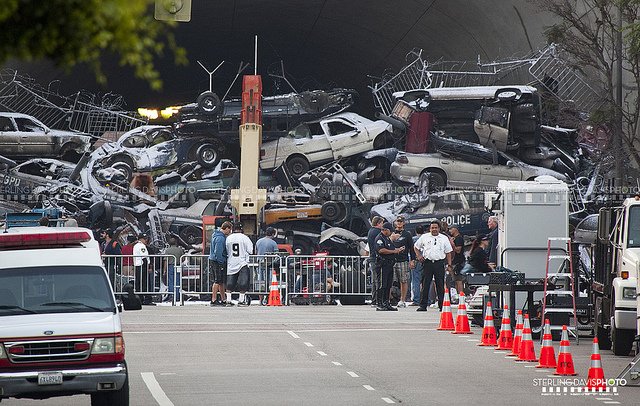 It has been a little while since we last had a rumor mill article, but that has mostly been because the filming has moved away from Pittsburgh and to the more "protected" filming area known as LA. There was a couple of things that happened over the weekend as well as right before the weekend that are worth mentioning, so let's sift through them.

First up, there is a number of sites mentioning that a scene was shot in Los Angeles. Let's go through to images first and then discuss them.

The sites online seem to be reporting that there is a form of destruction in Gotham and for whatever reason, there is a ton of cars piled up in front of a tunnel. What it appears to me is that someone is trying to keep people from entering or leaving the city. They do this by blocking off the tunnel. The second image shows the barricades we have seen in the past, and adds to the idea of it not being strictly destruction but a barrier.

Next up, Selina Kyle has been busy. Turns out according to Just Jared, she can throw a mean hook too. Images have shown up showing her battling a thug in front of a child in a civilian guise.

The last rumor we have heard before. Juno Temple has been rumored for a number of roles in the film, but one role seems to be gaining some traction. Total Film magazine (via Comic Book Movie) had an interview with Temple where they suggested Holly Robinson as her role, well here is what was said. "Then there's the big one-The Dark Knight Rises, where Temple plays "street smart Gotham gal" Holly Robinson. Speculation has it that her Holly is the young prostitute first seen in Frank Miller's Batman: Year One, and that she may be the sidekick to Anne Hathaway's Catwoman"

Temple's response in the magazine was:

"I can't talk about that. But I think it's going to be [frick]ing unbelievable. [Christopher Nolan] is awesome! There's something really gentlemanly about him. He's got an insane, incredible vision going on. Just getting the opportunity to work with him is awesome"

So the reason that this is gaining traction is because she didn't confirm or deny the role of Holly Robinson that Total Film suggested. There is still plenty of time to learn her role from the official avenues, and even if they do not reveal who she is playing the film will be released in under a year.

So until next time, take everything with a pinch of salt.