A couple of weeks ago, the current rumor was that Tom Hardy was going to be playing Killer Croc. Well, I told you how absurd that was back than and now we come to the newest rumor of which character Hardy will play in The Dark Knight Rises. 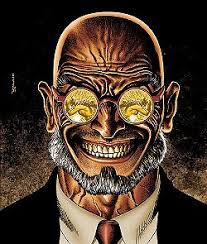 Tom Hardy as Hugo Strange. Well, it could work, but the rumors floating around out there are not helping the belief meter. A new site on the radar called "Batman-News" claims to have a source that Hardy will play Strange in TDKR. Now obviously the source is not named, but the writer of the article on the site had this to say.

I’ve heard that Tom Hardy is in fact going to play the villain. My source strongly believes that Hardy is going to be playing Hugo Strange. This is the first bit of information from this person that I’m publishing, however they have been accurate in the past. For example, this person told me weeks before the recent Christoper Nolan interview that The Riddler would not be appearing in the film. They also mentioned that Rachel Weisz and Anne Hathaway were in the running for the lead female role a couple of weeks before Deadline posted their list. Given their track record so far, I wanted to post this Hardy news that I received via email. Again, this should just be taken as rumor. I’m posting this for the sake of discussion since we’ve hit a dry spell with The Dark Knight Rises news.

So there are a couple of things wrong with this. The first thing is that despite all of the other information being true, this could also have been information that was figured out by educated guessing. The other issue is that this was posted up due to "a dry spell" of news to report. So, let's create news because there is nothing to report. Also keep in mind that this site popped up only when news started to come out about Batman 3.

And the other thing that mysteriously popped up yesterday, even though it has been online since the beginning of the month?

The issue with rumors is they spin out of control very quickly. This was only posted yesterday, and now TotalFilm is reporting that the film will be based on the Batman: Legends of the Dark Knight story arc "Prey." How convenient is it that it coincides with the previous day's rumor?

If The Dark Knight Rises is based off of "Prey" than I am sure Nolan will deliver. However, a word to the wise, do not read into these rumors that float along the TDKR: Rumor Mill.