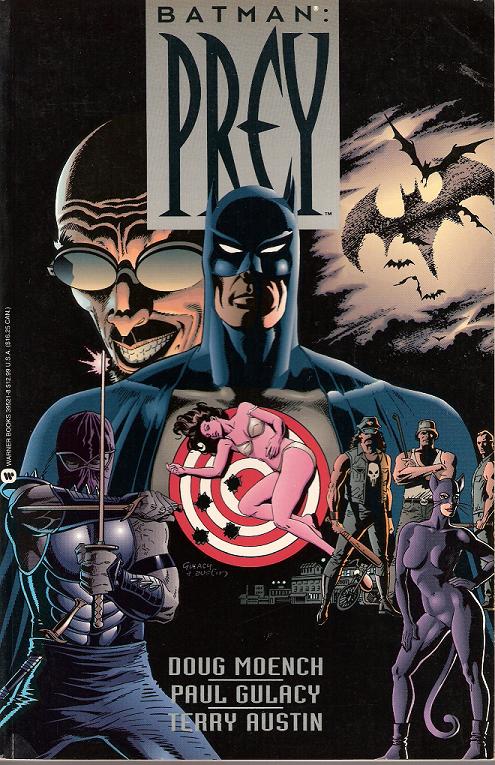 So the big rumor flying about at the moment is the possibility of The Dark Knight Rises borrowing ideas from the comic book story arc 'Prey' or even adapting it completely. With psychologist Hugo Strange involved, who is expected to be portrayed by Tom Hardy. For those of you who aren't aware of the story arc 'Prey' (you clearly haven't been following BBFB, go back and listen to my review of the story here) here is a quick recap.

Hugo Strange triggers the creation of a special task force of the police, charged with capturing Batman during his early days. This force includes Max Cort an extreme police officer, and is overseen by Commissioner Gordon, who is unsure of his loyalties to his police department or Batman. Max Cort eventually becomes his own style of vigilante and hunts Batman and we slowly learn that Strange isn't quite mentally sound. Strange turns out to be obsessed with Batman and his identity, planning to usurp him and take the identity of the bat for himself, something he thinks he can achieve by killing him. He deduces Batman's identity and causes a lot of grief for the Dark Knight.

Now I think that this is an interesting choice of story to adapt. I feel the only way to really raise the stakes in this final installment is to challenge Bruce Wayne's secret identity. That seems to me to be the best way of really cranking up the tension for this final conflict, soon Bruce's allies will be at risk once his secret is revealed, something Bruce won't be able to withstand for long. It seems to be a common thought amongst fans that this might be how Nolan proceeds. Surely that is the only way that any villain, let alone someone as obscure as Strange, is going to cause more damage than the Joker did and upset the order for Bruce. Unveiling his ultimate secret and final safety method is the best way to weaken our hero. However isn't the idea of a crazy psychiatrist a little close to Dr. Crane/Scarecrow from Batman Begins?

And what of Tom Hardy as Strange? I can just about imagine it but it's a little bit of a stretch for me. I would expect Hardy to play the Max Cort character, leader of the special task force, a man on a mission to catch the bat. That could also be transferred to the rumor of Harvey Bullock, perhaps he will lead the team. Either way I think Hardy will take on Christian Bale in some fashion.

So I feel that there is a decent basic premise in Prey, that could be transferred to The Dark Knight Rises. The issue of the revealed identity crops up, the idea of a conflicted Commissioner Gordon is something we are expecting to see and also Strange would offer a psychological battle of minds and will with Bruce as we have seen from the previous two installments villains and even Catwoman fits in the story, another heavily indicated character that will appear. So it does just about fit in with all the rumors we've heard. I'd quite like the idea of the finished film containing some elements from Prey and a few original ideas from Nolan and his team. Simply because Prey itself does not have enough for me to create an entire epic feature film but the idea of Max Cort becoming a vigilante played by Tom Hardy battling the Batman is a tantalizing thought.