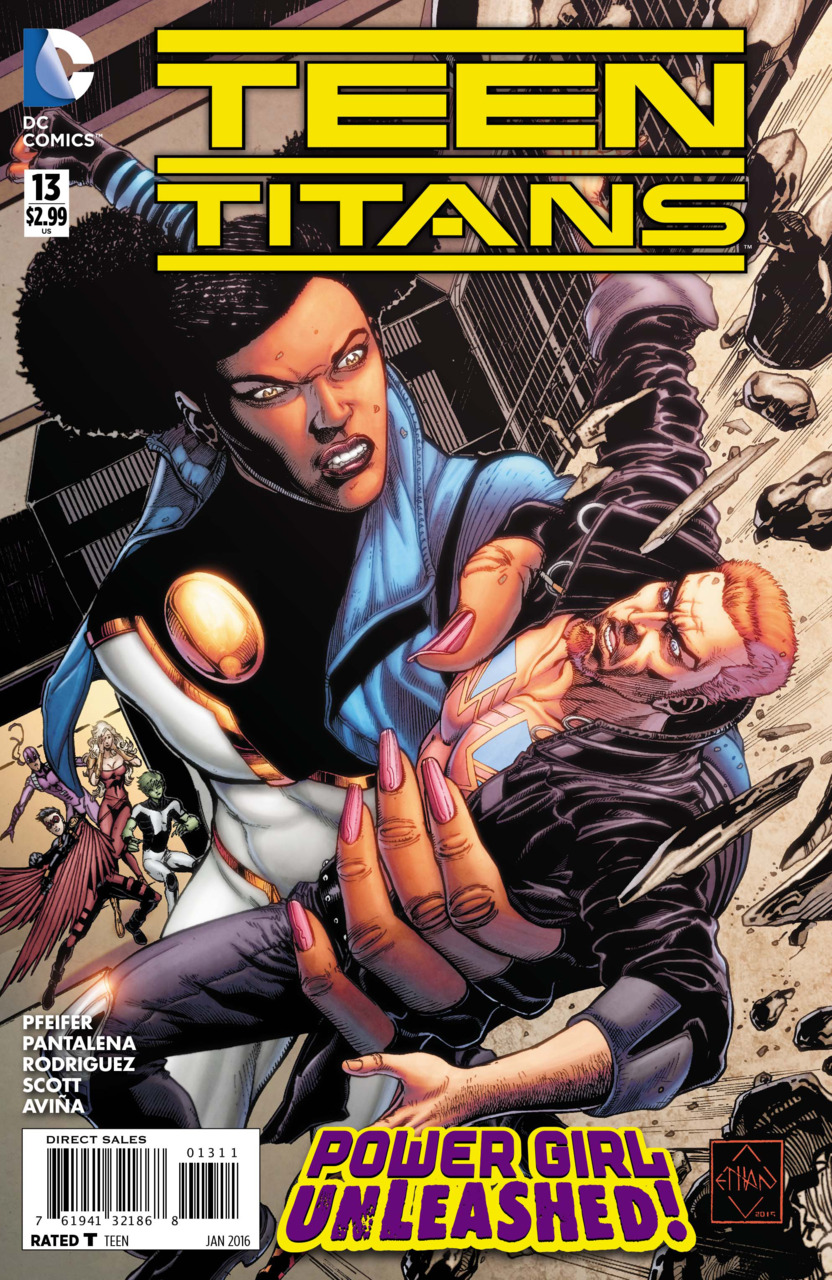 The Elite minus Wonder Girl and Kid Flash assemble in the security level of the M.A.W. prison where the Titans are inside. Black orders Guardian, Klarion, and Indigo to secure the perimeter so no one can get in or out. Power Girl questions what is going on, there were reports of rioting but everything looks calm and she wonders where Wonder Girl and Kid Flash are. Black orders her to stay put and keep an eye on things.

Back at the Chamber of Harvest, Red Robin, Wonder Girl and Kid Flash lick their wounds. Cassie comforts Tim over the loss of Superboy from the previous issue and Bart balks at Tim. He blames the mistakes of the Titans on Tim. Cassie retorts that Tim is realistic. He has dealt with stuff none of them have dealt with before. After all, he was trained by Batman. They need to get back to the prison before the other Titans are taken into custody by the Elite and it may seem impossible. Tim interrupts Cassie saying that nothing is impossible. Tim starts to work because the Titans will never give up. He gets the approval and help of both Cassie and Bart.

Back at the M.A.W., Dr. Psycho starts to mind meld with Raven. In her mind, Raven attacks Psycho. When Bunker and Beast Boy recover from their attacks they see a standing Raven in full costume while Psycho is quivering on the floor.

Back at the security level, Red Robin, Wonder Girl and Kid Flash materialize. And are greeted with the dropping body of Dr. Psycho. Bunker and Raven arrive to inform the three that there was never a riot in the prison. It was all the psychic manipulation of Psycho. All Psycho wanted was Raven’s power and that was his mistake. Red Robin rushes into the prison looking for Chimera. Before the guards can open fire on Tim, Bart snatches their weapons declaring that he is a Titan.

In the Maximum Security level Black comes face to face with Despero. Black says that he was looking for him just not expecting him to be out of his cell. Black wants to take out the Titans once and for all and he needs Despero’s help. Power Girl flies in and Despero changes into Chimera. Power Girl strikes Black and Black retaliates by grabbing Tonya’s neck. Suddenly Tanya grows huge and continues to beat Black. Black admits that while she was with the Elite, he was dosing her with radiation and drugs causing this change in her power level. Tanya smashes Black into the ground. Tim pleads with her to stop before she kills Black and she shrinks into Cassie’s arms weak and sick. The rest of the Elite arrive and Guardian apologizes to Red Robin. Black was manipulating the Elite like he did the Titans before. S.T.A.R. labs dispatches a medical team to tend to Tanya and Black if they have time. Suddenly we hear a voice. Raven starts to teleport the team out but collapses. Soon Red Robin, Bunker and Beast Boy go down as well. We see who the voice belongs to. He calls himself Alpha Centurion and he is there to bring the Teen Titans to justice. Next issue Mug Shots.

We finally get to see the Titans together again. It is good to see Cassie, Bart and Tanya back with the team.

This issue ends with a cliff hanger and questions. Who is this Alpha Centurion? What did Black do to Power Girl and what did he do to the others members of the Elite including Wonder Girl and Kid Flash? There is not much else to this issue other than we see the other characters I frankly forgot about when reading the last issue.