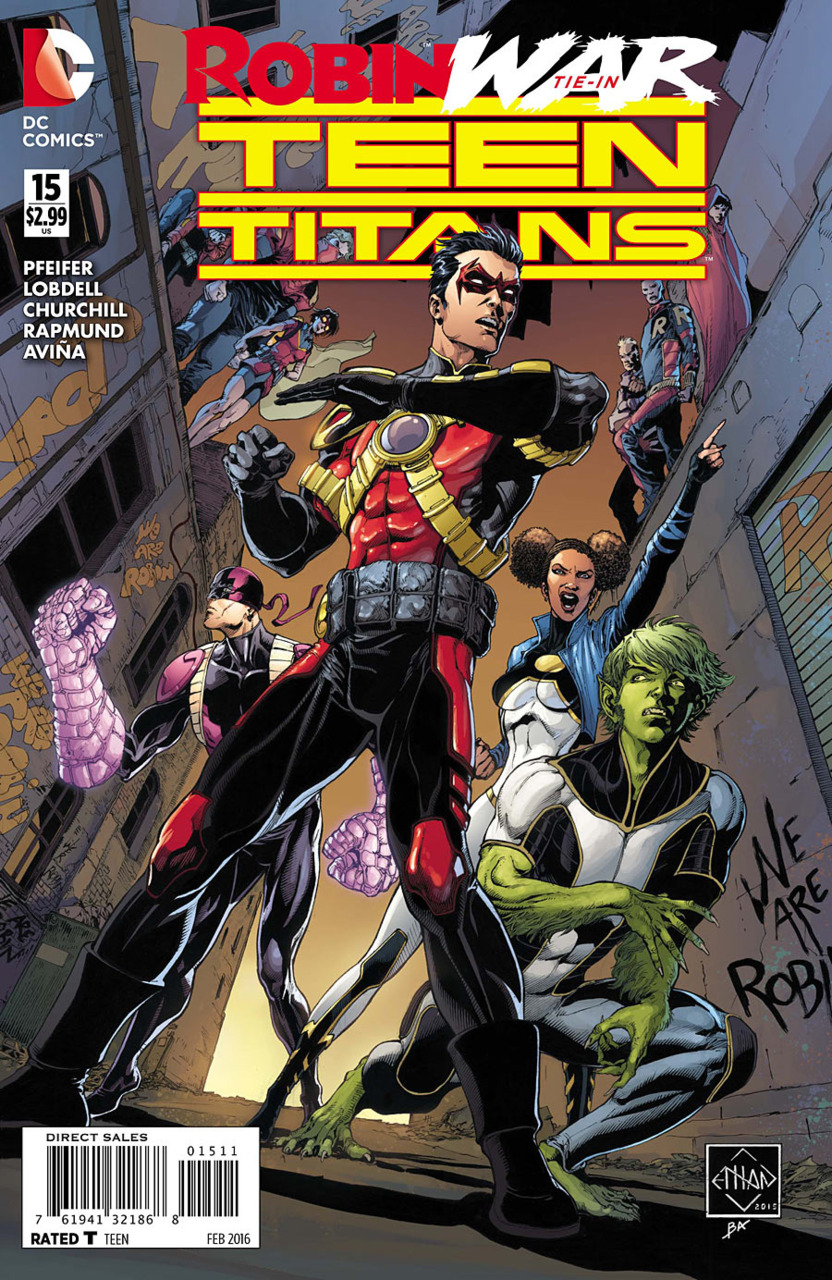 “On The Run: A Tale from the Robin War” opens at Red Robin’s Robins Nest. Beast Boy in fooling around with the monitors provides exposition on the status of the Robin War event. Tonya chastises Miquel and Gar for goofing off with the equipment when Raven senses a perfection command echoing through barren minds. She insists on investigating despite Red Robin’s orders to stay put.

Outside Gotham in Kane County, we catch up with Cassie and Reiser, AKA Doomsday Jr. They are relaxing at the pool of a rented mansion. For some reason they are not at the Robins Nest but like the others they are waiting for Red Robin’s call.

Back in Gotham, Red Hood and Red Robin are with a group of Robins. We get an editor’s note that this issue takes place after the Robin: Son of Batman #7. Red Robin insists that the kids need training and are not ready to hit the streets. Red Hood disagrees. These kids have every right to fight for what they believe in as the sanctioned Robins. During this conversation, a police officer finds them and interrupts the discussion.

Across Gotham, Beast Boy, Bunker, Raven, and Power Girl arrive at a theater, the location of the disturbance Raven detected. The team enters the lobby and finds a group of people frozen in place with a similar pudgy appearance to their faces and similar purple tops and white bottoms. The team moves to center stage where they find Professor Pyg. He has several kids strapped to gurneys and one girl with tears in her eyes says please. Pyg is trying to make the world perfect. The team goes into action but are soon attacked by the kids they met in the lobby. The team is quickly overpowered and captured.

Back with the Robins. Two of the kids attack the cop and one gets grazed in the arm by the cop. Despite this setback, they take the cop down. They leave the cop tied up and Red Robin asks Red Hood is he still thinks the kids do not need training.

At the theater, the team wakes up to find themselves strapped to gurneys. In the background we see the girl from before vomiting. In a splash page, we see Beast Boy is strung up with two IV’s attached. One is going into the girl’s arm and the other is filling a jar. Bunker breaks free and attacks Pyg. But Pyg is hit from behind by a green hand. The girl has turned into a green monster, a side effect of Gar’s blood. She attacks Bunker and Power Girl grows and grabs the creature and holds her down. Raven probes her mind and puts her to sleep. Bunker grabs Beast Boy. As Tonya returns to normal size the girl reverts back to a human form. Tonya realizes that blood was taken from all of the Titans by Pyg and in the confusion, he has escaped.

Meanwhile, the Robins arrive at Gotham Academy but find the Gotham PD already there. The Robins need to find another way into the academy but we see that they are not alone, they are being watched by Talons in the trees.

We learn that the theater was a trap for the Titans. Pyg was after their blood all along. Pyg gives the blood to the Cult of Blood.

The Pyg story line is interesting but I got bogged down with the Robin War material. Was it really necessary to include these pages, I would have liked to see why Cassie and Reiser were outside Gotham. Was this a chance for them to get alone?  Where was Chimera?

I did have an issue with the girl and her transformation back into a human. I think it was too sexualized. She lost her clothes when she transformed into the creature. When she became human, we saw the bottom of her breast as her arms were crossed across her chest. Fortunately, Raven used her cloak/cape to cover her up. I found this scene a little disturbing in that we are assuming that these are teenagers that are being experimented on.

I do like the creepiness of Professor Pyg. His motif is a little ridiculous but he is one creepy villain with this apron covered in blood and holding a drill presumably to drill into his victims.

Overall, the issue was alright but the Robin War wore the issue down and I did not like the sexualization of the girl captive.