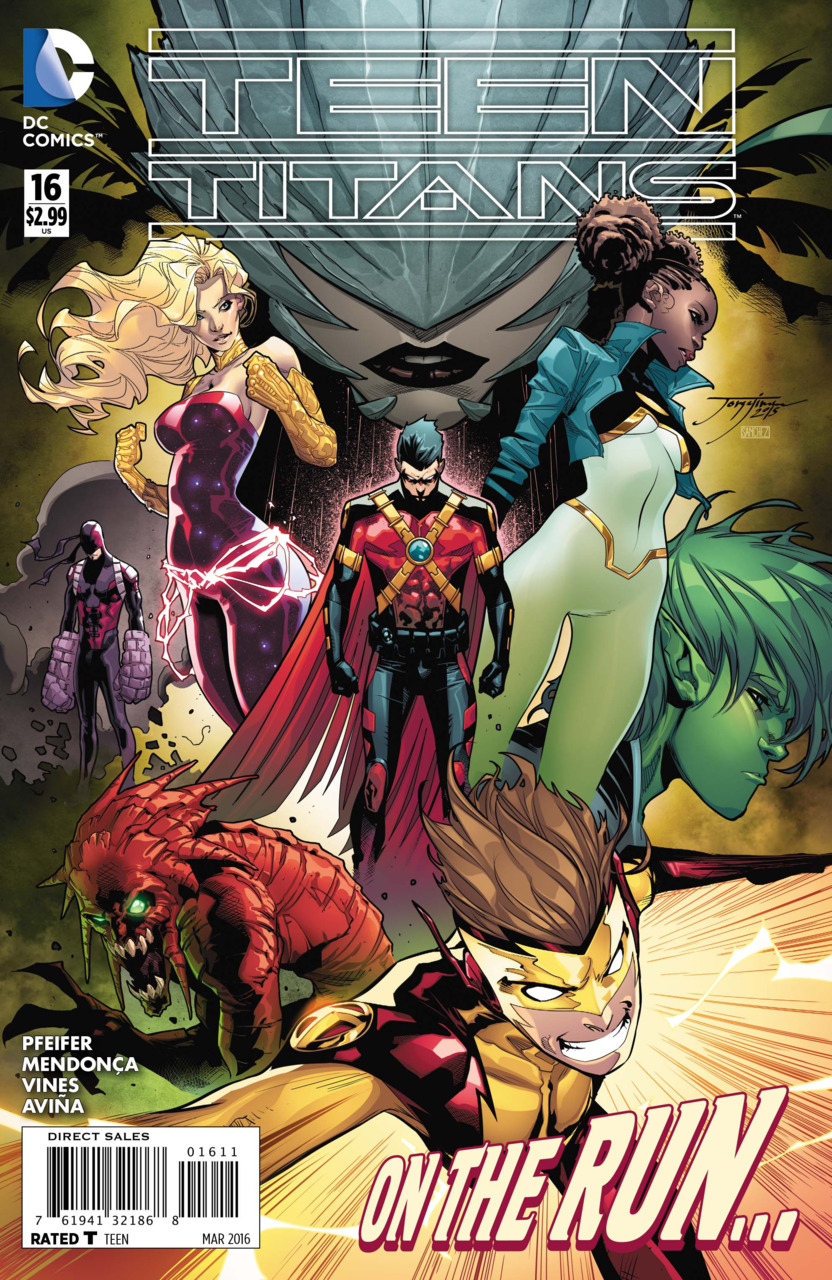 “The Sum of its Parts” opens in the Robin’s Nest. The team are gathered minus Red Robin. They are commiserating about their recent encounter with Professor Pyg from the last issue. Raven senses that someone is coming and Red Robin himself appears. Red Robin does not come with a plan like Bart hopes but with bad news.   As shown on the monitors, the Titans are still being hunted and he is interrupted by Raven who reports that Tim was followed. Red Robin insists that that is impossible when he is suddenly attacked and ends up on the floor with a foot on his head.

Tim orders the Titans to attack and they do. In the aftermath of this skirmish, Red Robin questions the invader. They discover that the attacker is a Durlan, the same species as Chimera. He is here for Chimera. Suddenly the building starts to shake and more Durlans attack leading to a full on fight between the Teen Titans and the Durlans. The Titans are defeated one by one leaving only Chimera standing with the Durlans.

The Durlans want Chimera to return to Durla with them. Her transformative powers can return their planet to its rightful place in the galaxy. Tim still in a fighting mood challenges that they will track the Durlans down in order to save Chimera. Chimera however tells Tim that he needs to let her go. She wants to go with the Durlans so the Titans can live. She kisses Tim on the cheek and leaves with the Durlans.

The other Titans recover from their battle. Tim starts to formulate an exit strategy but then notices that Bart is missing. Power Girl grows and finds a lengthy message from Bart on the floor. He says that it was great that he was able to return to the team however when he saw Chimera leave, he remembered that he too has unfinished business that he needs to address alone. He needs to fix his own mistakes and find a way to save the woman he loves who is stuck in a prison in the future.

With Bart’s exit, the rest of the team needs to leave fast. It was pretty obvious where the Titans are located with the Durlan ship lifting off of the roof of the Robin’s Nest. The question now is where to go. Reiser has to return to Metropolis however the team needs to go where there is not a superhero presence. Red Robin does say that Raven can drop Reiser off in Metropolis on their way to the city they are headed to. Just then Gotham PD shows up with helicopters to take the Titans into custody. Raven is able to whisk the Titans away.

One week later in Heaton, Pennsylvania; a masked boy is cornered by a gang. Just as the gang moves in for the kill they are interrupted. The Teen Titans: Red Robin, Power Girl, Bunker, Beast Boy, Wonder Girl, and Raven are there to even the odds. Next issue: Who is Wonder Girl.

I can only say that this issue was okay. It does not further the Professor Pyg and the stolen blood samples story line at all. We only get a mention of that encounter in the very beginning and that is interrupted by Red Robin himself. The rest of the issue seems to be a reduction of the team. Chimera returns to Durla, Bart disappears, and Reiser who we really did not get to know goes back to Metropolis and probably his own Doomsday title. We are just left with the six remaining characters.

The main action beat was the fight of the Durlans which basically was them mopping the floor with the heroes of the book.

The action was alright but I was not satisfied with this story at all. We are left with a plot thread open and a new direction for the Teen Titans.