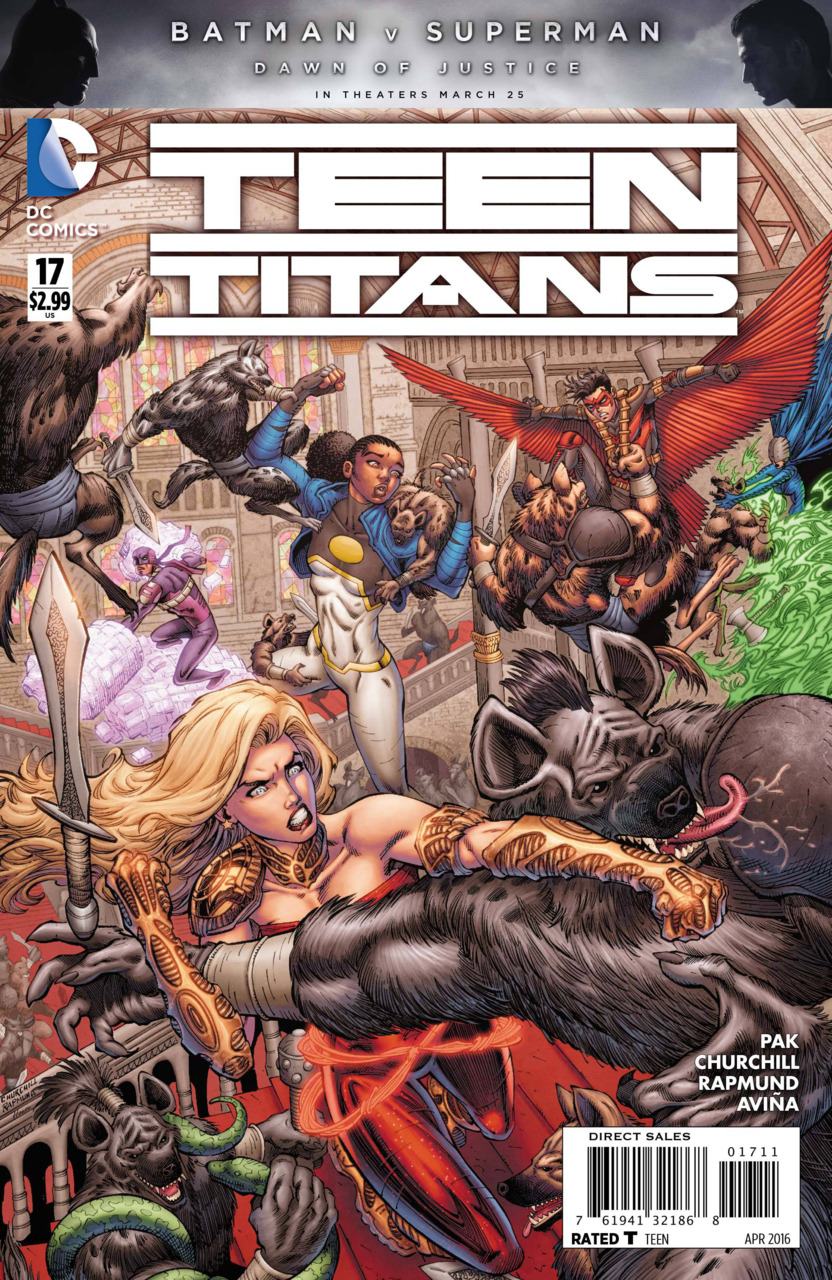 “But Who is Wonder Girl” opens in the Adirondacks. We see Cassie standing over a cliff. She appears to be hearing or perhaps feeling a voice. The voice is saying that Cassie has a lot of questions including her father, the source of her powers and her feelings of restlessness. She steps over the cliff and floats in the air. Tim calls out to her. He says that Cassie should be at the cabin and the team needs to stay out of site. Cassie argues until both hear gun fire. Two hunters are targeting a deer. One fires and the bullet is stopped by Cassie. Gar as a wolf attacks the hunters gun and Power Girl shows up in her gigantic form to chase the hunters off. We get a splash page showing that Raven and Bunker appear as well.

The team flee and head to Wilmington, Delaware. Again Tim chastises the team saying that they are being hunted so no unnecessary heroics. Beast Boy retorts that those are his favorite kind of heroics. After some banter, the team goes to a quick market. The clerk reports a shoplifter and everyone is outside. There is no sign of the shoplifter. It is revealed that Cassie was the shoplifter and she stole a pair of sunglasses. Now on the road Cassie again feels that voice talking about her father. Tim glances at her as she appears to be daydreaming.

In Waynesboro, Virginia at the Pine Lodge Motel the team reconvene. Cassie is now antsy, she is getting tired of hiding out and she believes that the team was meant for something bigger. Tim urges patience as he just needs a little time to clear their names. Cassie leaves the room and runs into Miguel who has come back with tacos. He approaches Tim. Tim just says that Cassie is driving him crazy. Miguel just attributes these feelings to Tim crushing on Cassie. Tim is sure that Cassie is hiding something. Tim tells of Cassie’s past as a girl who never knew her father. She started stealing relics at her mother’s digs that led to the theft of the silent armor that gives her her powers. Tim thought the Titans gave her purpose and now the team is called criminals and he fears that Cassie is backsliding. Raven, Tanya and Gar are sitting in the woods when Cassie shows up in uniform to slash a stump. Cassie tries to rally the others to use their powers but in failing she walks off in frustration. Raven approaches her as she calls out to no one. Raven senses that Cassie is searching for answers and that something is calling her. Tim and Miguel hear a sound and they see Cassie dart off in the sky.

Now in London, Cassie arrives at an apartment building and changes into her civilian clothes. She can now hear the voice and she is almost there. Suddenly Raven teleports the other Titans in. The thing that is calling to Cassie is reeking with darkness. The team wants to help her. Cassie already knows what is going on and she is about to meet her father. The Titans hear a scream. Workers on the roof are being attacked by talking hyenas. The Titans go into action to save the workers and stop the hyenas. Cassie suddenly starts punching into the roof. She says that “it’s down in the apartment” and breaks through the roof. She sees what looks like the head of a statue on the mantle. Raven senses that the sculpture is an actual head and that it is the head of Cassie’s father. Red Robin tells her that they will help her figure out who she is but then is interrupted by the goddess Cassandra. She says that Cassie is a god like her father. She is actually the granddaughter of Zeus and she is there to restore Cassie’s father to life. Cassie is surprised by this revelation. Red Robin tries to intervene when everyone in the room vanishes. We see a shadow and suddenly Tim is lifted off of the ground and we see that he is in the clutches of Wonder Woman. She wants to know why a Robin has trashed her apartment. Next issue Clash of Wonders.

We finally get some insight into the character of Wonder Girl. Up until now she has just been there sometimes as an antagonist to Tim and sometimes as his helper. This really is her story but we get bits of the other characters here as well. We see that Tanya is antsy when she is small and she is ready to grow. We see a more confidant and powerful Raven unlike the character we have been seeing. We even get a glimpse that Miguel really wants to meet Dick Grayson.

We see a Cassie who is headstrong and really is struggling with the questions in her head. She really believes that the voice she feels is her father’s and the art really is good at showing her disappointment and sadness when she is holding the supposed petrified head of her father. I do not know who this Cassandra is but she must have a connection with the Greek gods that are prominent in the Wonder Woman stories.

This leads us to the final page of seeing Wonder Woman holding Tim by his wings and asking why he trashed her apartment. Where did the others go? My guess is that Tim and Wonder Woman are going to team up to find them. I am looking forward to seeing this in the next issue.

Overall, a good issue. Tim is still whishy-washy but we see some good characterization of the other members of the team.